Blogtour: With Or Without You by Zane Riley

With Or Without You 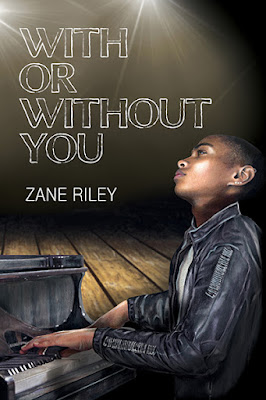 In the much-anticipated sequel to Go Your Own Way, high school seniors Lennox McAvoy and Will Osborne pick up right where they left off—navigating the tumultuous waters of a new relationship and dealing with Will’s disapproving father.

When a violent incident forces Lennox to give up his independent ways, he must come to terms with his past just as Will is grappling with his future. As Will’s college plans become reality, will Lennox have the courage to go after the opportunities he doesn’t think he deserves?

The band room was empty when he pushed the door open, but the piano was set up like it was almost every afternoon these days. Only Mr. Robinette and a music stand littered with sheet music was absent.
"Hello?"
The silence struck Lennox as odd, but as he sat down he also realized how strange it was to announce himself. So much had changed since the first time he'd snuck in here to play on his own. Now he was auditioning for some college he still couldn't fathom.
To make Will happy. And maybe a little bit for himself.
"Ah, I wondered if you were going to show up."
Mr. Robinette was behind him, the door to his office now wide open. He'd taken off his tie and undone a few buttons on his shirt like he did most afternoons when they practiced.
"You just want to play it through a few times or mess around with something else?"
Lennox took a seat at the piano, but didn't both opening his bag. He'd memorized the piece he was playing by Valentine's Day and now, almost two weeks later, he could write it out measure for measure on blank sheet music. But playing it was becoming repetitive. For two hours, three times a week, almost nonstop with the same four pages and nothing else.
"I'd rather try something new. That piece is getting a little old."
Mr. Robinette smiled and pulled a chair up beside him. "I had a nightmare the other night and it was the theme song while I ran around a haunted house Scooby Doo style."
"You didn't catch a ride in the Mystery Machine, did you? I've always wanted that van."
"I've got a lunch box version of it. It doesn't fit much though because it's too narrow. Anyway, play what you want. I'll be here until about four-thirty, so it's all yours."
As Mr. Robinette returned to his office, Lennox pulled what had become his music notebook out of his bag and opened it to the latest page. He'd taken to composing during class when he should have been taking notes, especially calculus where he had no reason to pay attention anyway.
The latest page was a tune he'd come up with while the other kids had been tapping their pencils and erasing answers. Every moment of his life carried a rhythm, a melody, and an emotion he could create with, and his notebook was becoming a testament to that. He played through everything he'd jotted down over the past few days, but after several rounds he kept coming back to one. It was a piano version he'd tried—and mostly failed—to create of one of the songs Will had played on a loop a few weeks ago.
"I'm getting ready to lock up!"


Mr. Robinette's voice carried out of the office and into the band room. A few minutes and several jingles of Mr. Robinette's keys later, the office door was shut and Lennox was closing the cover on the keys.
"That last piece you were playing, was it a cover?"
Lennox shrugged as they headed for the door.
"It was supposed to be. Didn't sound much like the song."
"Well, the others did. They were all really good, even the ones that weren't covers."
"Uh, thanks."
Lennox watched him at the door to the parking lot for a moment. He'd been a great help over the last month—all year if Lennox was honest. Mr. Robinette had believed in him in his own way since school had begun, and thanks to him he had a decent shot at this audition.
"Thanks for… all of this. I actually feel like—just thanks."
Mr. Robinette gave him a genuine smile and patted him on the shoulder.
"You're very welcome. Let me know how it goes when you get back, okay? I'm rooting for you. Got all of my fingers and limbs crossed. You deserve the chance. Don't doubt that or yourself."
"I-I won't."


It was funny to have so many people believing in him after so long. Happiness was a strange feeling as well. Until he'd let Will into his life he couldn't remember how to capture such a feeling in his chest and keep it there.

Hi Zane, thank you for stopping by today. Please tell us a little about yourself, your background, and your current book.

Hi! I’m Zane, and I’m a queer transgender writer from northern Virginia. Currently, I’m in the process of packing up to move to Washington state, so I’m pretty busy at the moment, but also very excited. I’ve been writing since I was a little kid, although I didn’t get truly serious about it until college when I switched my major to Creative Writing.

With or Without You is my second novel and a sequel to my first. It continues Will and Lennox’s story as they finish up their senior year of high school. As they begin to learn how to navigate their growing relationship, Will plans for his future in college while Lennox struggles to accept that his future is more than surviving until the next day. They each begin to forge their own paths only to realize that the futures they each want may lead them away from each other.


What story ideas do you hope to tackle in the future?


I hardly know where to start without all of my notebooks to flip through—I’m in the process of moving across the country, so almost everything I own is in a box somewhere—but I supposed the oldest idea is a good place to start.

About three years ago now, I started writing a story for NaNoWriMo that I’ve been calling “The Soulmate Cure”. I’m not sure if that name will stick forever, or if I’ll ever finish it and publish it, but it was my first true departure from writing fanfiction outside of short stories for college seminars.

This story is set in a universe very similar to our own, but where people have biological soulmates that are connected through touch. If you touch your soulmate, then it actives the “Soulmate gene” which makes your body dependent on their proximity. If that person isn’t around you enough, then you start to get very sick. Physical contact is extremely important, so you can begin to see how that’s a problem. What if you brush hands with someone on the subway and then never see them again? Or if you get mugged and then start getting sick a few days later? What happens when you can’t find the person, or worse, if that person has harmed you? Or what if you simply don’t like each other?

It’s a hotly debated phenomenon, with a lot of religious groups devoting vast amounts of time to aiding young people with finding their soulmates and insisting that all soulmates are long-term romantic and sexual partners. The more modern, liberal interpretation is that it’s a nuisance and most people are afraid of the repercussions of meeting their soulmate. They don’t want to be eternally bound to someone they don’t know, and they don’t want their current life or relationships ruined or interrupted by some “soulmate” they’ve never met. So many assume that a soulmate is meant to be a romantic partner, in part because of the centuries long hold religious groups had, but they aren’t. Not always. Some are best friends, others are lovers, others are long-term partners, and some want nothing to do with each other

The scientific community has been researching to find a medical solution, and they’re very close to an answer. In the meantime, the government’s tried to create a balance of laws to satisfy all sides. At puberty, when the gene has the potential to become active, people are allowed to start wearing protective gloves and clothing. It’s a huge industry that’s created a lot of pushback against the medical community that’s trying to find a “cure”. Non-soulmate couples aren’t allowed to marry until they’re both thirty. The lists of regulations go on and on, from decades and centuries of legislation.

The story focuses around Jay Valencia, a rookie baseball player, who bumps into Lucas, a drummer in an underground band who is two days shy of his thirtieth birthday and ready to marry the woman he’s certain is the love of his life. Too bad things don’t always work out the way you plan it…

I have a number of other ideas, but they all have a common tread lately of focusing on at least one, if not two, main protagonists who are transgender. It’s become a very important focus for me as a transgender person as I start to think about writing beyond my Go Your Own Way series.


Thank you!! The soulmates idea sounds fascinating. Looks like we have some great books to look forward to.

Zane Riley is a transgender writer who wrote his first work of fan fiction in the fourth grade. He is a recent transplant to Vancouver, Washington where he spends his time watching long distance baseball games, hiking, and exploring the musical depths of the internet. His first novel, Go Your Own Way, was published by Interlude Press in 2015.