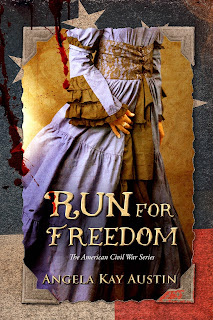 The choice was to run for freedom or die never having been valued as a human -- as a woman. The penalty was the same -- death!

Freedom and her brother, Triumph, would fight for their lives and the lives of the ones whom they loved no matter the cost. Escaping bondage meant they must RUN! Run to Moses. Run to the Promised Land.

Watson Brown knew all too well the struggle to survive. The fight to live. He had been given a second chance to do what he had failed to do in life -- as a human. What he and his father could not do before the Harpers Ferry Raid.

The runaway slave and her brother were a distraction.

He could afford no interferences with his mission. He nor his family could risk exposure.

They had been discovered. It did not matter how, but someone noticed the Negro servant and the white man. They did not know she was a woman dressed as a man, nor that the man with her was her brother. But, they knew something was wrong. Why would a white man walk into the woods with a Negro?

They should have planned better. Anger filled her as she scolded herself for her oversight. She and Triumph ran faster as more gunshots rang out. He was bigger and stronger, but slower. She demanded her legs run faster. “Faster, brother. Faster.” Her neck ached as she peered over her shoulder.

Men with dogs were quickly catching up to them.

A bullet whipped through the air, next to her ear, and buried itself deep into the trunk of a great old tree. She glanced toward the heavens, and then at the trees. The branches pointed to the path they must take, and the wind at her back pushed her. She knew that she and her brother were running in the right direction.

Branches popped and snapped as they ripped at the sleeves of her jacket. As her brother tossed his jacket, she tossed hers and her hat. The dogs might be confused for a moment. Her brother touched her shoulder, and she knew what he was about to do. He ran ahead of her and cut through low bushes away from her. He veered his path away from hers, not because he was leaving her, but because it would split the pack of dogs chasing them.

Running to the hidden river.

The woods thickened, the sun began to disappear, and the sky above her darkened. They had not read the signs incorrectly. She stopped to take a long deep inhale. The scent was stronger. Moist earth. Water. She ran, harder. There had to be water somewhere, but as her legs tired, and her breaths shortened, she began to doubt her instincts.

Before her eyes saw the water, her nose told her it was there. Without thinking, she ran toward the smell of fresh wet earth. She stepped into the low water, and stopped. Glancing up and down the hidden creek, her eyes ached from the strain of searching through the trees for her brother.

Her chest tightened at the distant sound of dogs barking. Did their loud growls and snarls mean they had captured Triumph? Were they celebrating their kill? Instead of swimming to the other side, she turned to run back to the spot she had last seen her twin.

Her brother burst through the thicket…

Angela Kay Austin has always loved expressing herself creatively.  An infatuation with music led to years playing several instruments, some better than others.   A love for acting put her in front of a camera or two for her thirty seconds of fame before giving way to a degree and career in communications.  After completing a second degree in marketing, Angela found herself combining her love for all things creative and worked in promotions and events for many years.

You can find Angela at