Blogtour: Into The Blue by Pene Hanson 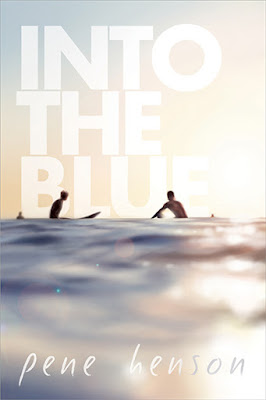 Tai Talagi and Ollie Birkstrom have been inseparable since they met as kids surfing the North Shore. Now they live with their best friends in a pulled-together family, sharing life and the saltwater in their veins. Tai’s spent years setting aside his feelings for Ollie, but when Ollie’s pro surfing aspirations come to fruition, their steady world shifts. Is the relationship worth risking everything for a chance at something terrifying and beautiful and altogether new?


Across from them, one of the Brazilians plays guitar. Ollie doesn’t recognize the song even when a couple of others sing along. The beach is wider and the sand finer than on the North Shore, but every beach is a little like home. Ollie misses the Blue House; he misses the surf and the palms and the shoreline he knows so well. He misses Jaime and Sunny and Hannah. Still, though he’s as far from home as he’s ever been, Ollie’s comfortable. These are his people, too. He leans back on his arms and looks up into the dark.
He’s watched the night sky since he was a little kid, but down here in the Southern Hemisphere he doesn’t recognize the hundreds upon hundreds of stars. The Southern Cross is up there. Ollie tries to orient himself.
Tai shifts toward him, then looks up and follows Ollie’s gaze. The warmth of Tai’s body settles into Ollie’s heart, grounds him. Ollie leans into him a little, and their arms brush to the elbow. The contact simmers in the air between them.


Unexpectedly, Ollie knows what he wants. “Come back to the hotel,” he says quietly to Tai. He pitches his voice low. It hums across the tiny space between them. No one else can hear him over the pounding surf and the sound of the music. It’s easy to be bold in the dark of a beach where Ollie’s never been before. He’s shocked by that same boldness.

We had a chance to ask the author a few questions:

Hi Pene, thanks for stopping by today.


What is your least favorite part of the publishing/writing process?


Sometimes the grind of writing is difficult, the every day of having already worked out what’s in a story but needing to get it into words. I also find it tough when I realise there’s a part of my book that’s not working and am not sure I can ever fix it. Fortunately I have a wonderful editor or three.

As an author, is there one subject you would never write about? What would it be?

I’m uncomfortable with writing about power imbalances in relationships. I can’t imagine I would ever write a story with a large age gap or a story where a boss and an employee fall in love. I also can’t imagine writing a story where one person is famous and the other a fan. Of course, there have been wonderful stories that included these things. Now watch me be inspired to write something like that.

When did you first realize you wanted to write?

I realized I wanted to revisit fiction writing while sitting in my office when I was 26 or 27 and reading stories published on the internet. I thought I had something to add to those stories, and suddenly realized with the internet I could write and post and people would read it.

How long did it take to write your book?

The first draft took 9 months, and the editing took 3 months. It was a tough slog. This second book took 6 months to write but I suspect the editing will take longer.

For Fun: Where is one place you’d like to visit you haven’t been before?

I’d love to go to a tiny island. Something you can almost see across. I’d love to feel what it’s like to be surrounded by the sea and safe there.

Pene Henson has gone from British boarding schools to New York City law firms. She now lives in Sydney, Australia, where she is an intellectual property lawyer and published poet who is deeply immersed in the city’s LGBTQIA community. She spends her spare time enjoying the outdoors and gazing at the ocean with her gorgeous wife and two unexpectedly exceptional sons. Into the Blue is her first novel.