Blogtour: Gays Of Our Lives by Kris Ripper

Gays Of Our Lives 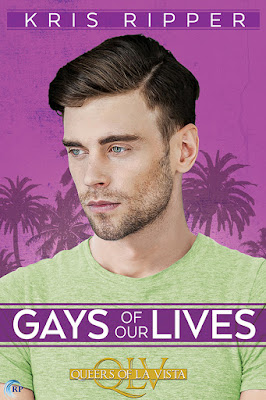 Emerson Robinette only leaves his apartment to get laid and go to work. Having MS—and trying to pretend he doesn’t—makes everything more complicated, especially his fantasies of coming on strong and holding a guy down. Finding a partner who’ll explore that with him isn’t Emerson’s idea of a realistic goal.

Until a chance meeting with a hipster on a bus makes him reconsider. Obie is happy, open-hearted, and warm; what’s more, he gets his kicks being physically dominated, spanked, and teased until he’s begging. It would be perfect, except for one thing: Emerson isn’t made for happiness, and he doesn’t see how a guy like Obie would settle for a cynic like him.

But as far as Obie’s concerned, the only thing keeping them apart is Emerson. Can Emerson handle a boyfriend who’s more invested in his future than he is? Emerson’s barely convinced he has a future. But when Obie’s smiling at him, anything seems possible.


Kris Ripper lives in the great state of California and hails from the San Francisco Bay Area. Kris shares a converted garage with a toddler, can do two pull-ups in a row, and can write backwards. (No, really.) Kris is genderqueer and prefers the z-based pronouns because they’re freaking sweet. Ze has been writing fiction since ze learned how to write, and boring zir stuffed animals with stories long before that.

To celebrate the release of Gays of Our Lives, Kris is giving away your choice of ebook from zir backlist. (Any release from Kris Ripper prior to Gays of Our Lives.) Leave a comment with your contact info to enter the contest. Entries close at midnight, Eastern time, on July 16, 2016. Contest is NOT restricted to U.S. entries. Thanks for following the tour, and don’t forget to leave your contact info!