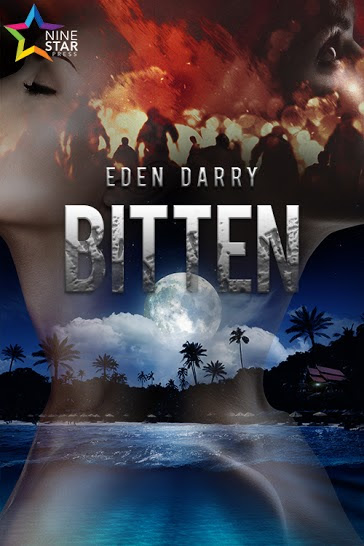 Dr. Gray Davis is looking for a peaceful, sun-filled holiday on a remote island, but then she meets Beau Pickford. The attraction is immediate. Unfortunately for them, Brody Douglas is also on holiday, and a stone carving he found by the river makes him sick—sick enough to kill him. But when he awakens, he’s not what he was before, and Gray and Beau find they have to fight for their lives and a way off the island.

Beau stood looking into the crocodile’s eyes. It hadn’t blinked at all. At first, she’d wondered if it wasn’t plastic, and she nearly shit herself when its head moved slightly. The wall dividing them was only about four feet high, and Beau wondered if it could climb. She hoped not. She didn’t know much about crocodiles—frankly, they gave her the bloody creeps. Beau was more of a dog person.

The crocodile zoo was an excursion offered by the hotel, and Beau only signed up for it because she had seen Gray’s name listed on the sheet in reception. She got a pathetic little tingle in her belly at the sight of it and put her own name down before really thinking about it. Beau shook her head and felt like a loser.

“I think it likes you.” Beau jumped at the sound of Gray’s voice behind her. “Sorry, I didn’t mean to make you jump.” She didn’t sound sorry at all.

“It hasn’t blinked for over ten minutes. Is that normal?” Beau asked, not wanting to take her eyes off the thing in case it crept up while she wasn’t looking. She’d heard that crocodiles were sneaky.

“I don’t know. Have you actually been staring at it for that long?”

“Well, I wasn’t sure if it was real, so I came closer to get a better look. Then, I realised it was real, and now I’m scared to turn my back on it. This wall is only four feet high.”

Gray burst into laughter, and the sound of it made Beau grin like an idiot. She forgot about the crocodile and turned to face her. “I’m so pleased my distress is funny. I thought you were a doctor. Aren’t you supposed to be sympathetic?”

Suddenly, Gray stopped laughing. Her eyes went wide, and she lifted an arm in the direction of the crocodile, finger shaking. “Oh my God,” she whispered.

Beau turned quickly, stepping between Gray and the glass. She fully expected to see the crocodile leaping over the wall at her. What she saw instead was the crocodile lying in exactly the same place as before. Gray began laughing even harder. Beau shook her head, unable to resist smiling herself. “You are an absolute arsehole.”

“I’m sorry. I couldn’t resist,” Gray said, her laughter tapering into fits of giggles. “You should have seen your face.”

“I could have had a heart attack. You’re mean.”

“I know. I couldn’t resist it.” She broke up laughing again. “Thanks for jumping in front of me though. You get points for chivalry.”

“Yeah, yeah. Well, I won’t be doing it again. You’d better hope there isn’t a real emergency.” Beau grinned to show that she was joking. All the while, she could feel her attraction for Gray developing into a full-blown crush.


Brody Douglas felt terrible. He lay on his back on the narrow hospital bed staring up at the ceiling fan that whirred in listless circles above him. There was a distant beat of drums in his head, and it was getting louder by the hour. He felt hot, as if his skin was on fire, and his bones ached to the marrow. It was the worst flu he’d ever had.

His fingers closed weakly around the carving—his Bokor. On the plane, while he was trying to sleep, the object had spoken to him and said its name. At first, Brody thought he was hallucinating—stone carvings didn’t speak. Except that wasn’t quite true, because the closer they got to the island, the warmer it became against his leg. It vibrated with a new energy. He was scared.

He whispered its name, lips barely moving. Even just doing that, he felt the word pulse with power on his tongue. He knew it was an important word, though he didn’t know what it meant. It was changing him, and he was powerless to resist. Increasingly, Brody felt like its vessel.

Now, whenever he closed his eyes, the strange stone building was always there, right behind his eyelids. It had grown larger in the last few hours, and it cast such a big shadow he felt it seep out from his eyes and lay itself across his face like a shroud.

A shadow couldn’t do that, but this one was sticky and black and not really a shadow at all. He held the Bokor tighter. His tired brain couldn’t quite make the connections anymore. His carving—his Bokor—was alive; he did know that. He also knew it was home. It had tricked him into bringing it here. The surprise money, the last-minute availability of this holiday—the Bokor had made it all happen so that he would bring it back where it was most powerful. Brody didn’t know how he knew that, and he sensed it didn’t matter anyway because it was too late.

About the Author:
Eden lives in London with her partner and their small, earless rescue cat. She runs her own business, and when she’s not working or writing, can usually be found rowing up and down the Thames. Twitter: @EdenDarry

Check out our events calendar for information on additional blog stops for Bitten and other upcoming releases!

Promotional post. Materials provided by the publisher.
Posted by Sandra at 12:00 AM