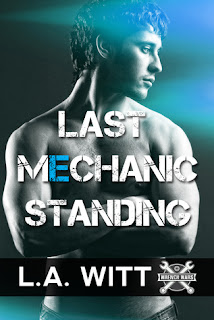 
Everyone at Jim Irving’s garage is gung ho about Wrench Wars, a new reality show featuring mechanics. Everyone, that is, except talented mechanic Chandler Scott, the sole employee who has refused to sign the contract. The rest of the mechanics are pressuring him too, because without Chandler—and his volatile interactions with his boss—no one’s getting on the show.

Chandler’s one ally is Jim’s son, Mark, who’s being forced to work for his dad until he pays down his student loans or finds a better job—and who’s been Chandler’s secret lover for a while.

Then a playful tryst in the garage blows up in their faces, giving the network ammo to blackmail Chandler by threatening to out Mark to his father. Now Chandler is backed into a corner, and Mark needs to decide how far he’s willing to go to protect the man who’s been sharing his bed … and may have stolen his heart.

There's something about a man who works with his hands, who's not afraid to get down and dirty.

Chandler Scott is an exceptional mechanic and an even better lover. He's been secretly sleeping with the boss's son, Mark, for two years, and even though he hates Mark's homophobic asshat of a father, he can't quit, not when Mark needs him.

Chandler doesn't like the idea of being on a reality show; he doesn't want the attention, doesn't want to live his life on camera. But the producers of the show, in cahoots with his scummy coworker, make sure he doesn't have a choice.

Mark and Chandler are so much more than friends with benefits, but Mark can't come out, not if he wants to continue living with his parents so he can pay off his college loans.

Mark's father Jim is constantly down Chandler's throat, and the producers eat that shit up with a spoon. Drama sells.


I don't typically go for established couple stories, but Mark and Chandler are so real together and so damn HOT, I didn't miss those first-time moments. For these men, every time is a first time.

When Mark suggests getting it on in the garage after hours, Chandler doesn't even hesitate. But Mark won't allow Chandler to be coerced, and the way he stands up for Chandler, for THEM, is worthy of a standing ovation.

The ending doesn't wrap up everything in a nice package, but I still count it a HEA, because these guys are solid. They get an A in communication and an A+ in the bedroom. What else is there?

If the crowns of all the kingdoms of Europe were laid down at my feet in exchange for my books and my love of reading, I would spurn them all.