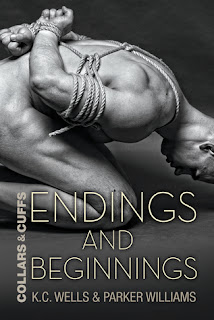 
In all his relationships, Darren Fielding never found the level of intimacy he witnessed between Thomas Williams and his sub, Peter, the day of Peter’s “rebirth.” Not only that, he never realized such intimacy was possible. For two years, Thomas’s business card has been burning a hole in his wallet. When Darren’s lover moves on, maybe it’s finally time to see where that card takes him.

Collars & Cuffs’ new barman, JJ Taylor, is really conflicted right now. He went to the club with a very specific purpose, already convinced of what he’d find there. Except it’s not what he expected at all. He certainly didn’t anticipate finding himself drawn to the new wannabe Dom. Nor could he have guessed the direction that attraction would lead him.

It all started in An Unlocked Heart with Leo, the Dom who lost his beloved sub in a car accident, and Alex, the shy, nervous server working at an Italian restaurant. Leo's partner, Thomas, found love again in Trusting Thomas with Peter, the fearful submissive who blossomed under Thomas' firm but loving care.

Every book revolves around the club, and the stories build on each other. One of the central plot points in the series is the abuse Peter and Jeff (from book 5, Damian's Discipline) suffered at the hands of a disgusting psychopath named Curtis, who was eventually arrested and tried.

In Endings and Beginnings, that plot point comes full circle. This book should not be read as a standalone. While the book focuses on two new MCs, Darren and JJ, it is told from multiple POVs, including those of Leo, Thomas, Alex, Peter, Jarod, Ben, JJ, and Darren.

Alex considers a new career. Ben and Scott are getting married (with a surprise on the way). Peter and Jeff receive shocking news. Jarod and Eli have a big decision to make.

These men are more than friends; they are family. The camaraderie they share is wrapped up in losses and love, in joy and sorrow.


I absolutely loved Darren, a sweet man who owns a hair salon and yearns for something beyond vanilla sex. He's smitten with JJ, the new bartender at Collars and Cuffs, from day 1, but JJ holds on to a lot of anger and resentment. At 24, JJ is still a scared little boy with major trust issues.

I was slow in warming up to JJ. He's quite selfish, and it takes him a while to realize how his actions have hurt other people, especially his mum who has always done her very best. He can't abide being deceived, but he lies to others. When things get tough, JJ runs.

JJ and Darren do not have a traditional Dom/sub relationship. They like rougher sex, and JJ loves being held and bound. Darren begins to train with Thomas, while JJ learns how to give up control.

While the steamy scenes between the other couples fade to black, the ones between JJ and Darren are on page and RED-HOT.

There's rope play and dirty talk and a nipple fetish. K.C. always writes good sex, but I really think she and Parker outdid themselves here.

I have a feeling we may see more of Jarod and Eli, one of my favorite couples of the series. The ending is joyful but bittersweet. Most endings are.