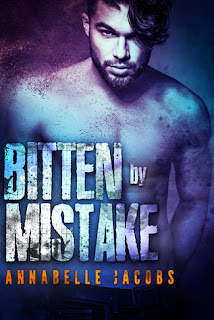 
From animosity to searing passion in a lunar cycle … but can their bond survive?

This book worked for me on so many levels: It's SEXY, passionate, and intense. It contains enough shifter action to satisfy rabid wolf fans, but the focus is most definitely on the relationship between Nathan and Jared.

When Jared first meets Nathan, he gives him the cold shoulder. Jared does not like shifters. He thinks they're arrogant and dangerous. He dated a shifter once and is determined to never make that mistake again.

Nathan is a little cocky, but he's a good guy: loyal to his pack, smart, and brave. Nathan doesn't mean to bite Jared. There's a rogue pack on the loose, and when Nathan goes after one of the rogue wolves, Jared, well ... Jared isn't supposed to be there.

Jared is NOT happy to be stuck with Nathan. He's even less happy to find himself drawn to the dark-haired, hot as sin shifter. The bite may cause Jared to change with the next full moon. But that's not guaranteed. Jared and Nathan have to wait it out. How will they ever pass the time?

The thing is, Nathan could be in big trouble if Jared changes into a shifter. Biting someone without consent is illegal in this alternate world. Neither the humans nor the werewolves take kindly to it.

If that weren't enough, the rogue shifters are still out there, and to defeat them Nathan's pack has to work with a rival pack whose alpha has it out for Nathan.

I loved how the enemies-to-lovers trope played out. Jared goes from hating Nathan to not being able to imagine life without him. The two bond with the bite, but that bond may disappear with the full moon. And that scares Jared more than it should.


I fell in love with Nathan right away; his possessive side is all kinds of hot, and he puts Jared first. Jared's a bit of a brat initially, but he really comes round for Nathan, and there's some vivid comfort/healing, which always melts my jaded heart.

I really liked the urban setting Jacobs created. There's enough world building without info dumping. The story doesn't take place in the woods; it takes place in modern-day England (although it could have been anywhere, really; the setting doesn't feel particularly English, and the characters sound very American). We're talking alleyways, buildings, and territories.

The secondary characters are well rounded and add to the story. I particularly liked Luke, Nathan's pack mate and close friend, and Gareth, Nathan's beta. One of the betas in Nathan's pack, Alec, is kind of a douche, but we actually never see him on page.

There's some action and suspense here, but none of that overwhelms the romance or the incredible connection Jared and Nathan share.

The ending is a HEA, although it's not exactly the HEA I imagined for these two. A few plot points weren't entirely tied up, but I hope that's because the author is planning on this being the first book in a series. The epilogue sets up two of the secondary characters as potential MCs, and I can think of a few more who are *ahem* very suitable.

Honestly, I couldn't put this book down! It's super steamy and fast-paced. If you're a fan of shifters (hell, even if you're not), add this one to your list. Two thumbs up here!