Spotlight: This Is How It Ends (Deadworld #1) by Nick Wilgus

Today we shine a bright spotlight on Nick Wilgus and

This Is How It Ends 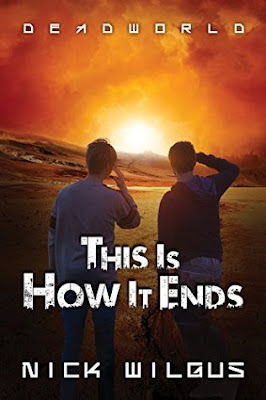 High school juniors Billy Gunn and Rory Wilder return from a weekend camping trip to find a mysterious plague has wiped out their small town of Port Moss, Mississippi. The question of why is only the beginning—especially when the dead refuse to stay dead.

Figuring out what happened is job one for Billy and Rory. But complications quickly set in. Not only do the dead rise, but a freak storm threatens torrential downpours as winter looms. And enormous ships appear in the sky, bringing with them alien visitors with technology never seen before.

Left without electricity and modern conveniences, Billy and Rory must figure out a way to navigate horrific zombies, advanced alien life forms, and apocalyptic storms, as well as deal with their growing love for each other in a world gone mad.

As the sun went down that first day—we call it Black Sunday now—we sat on the front steps at my house, too overwhelmed for words.
My mom and dad were dead. So were Hank and Beth, my little brother and sister. So was everyone, in fact, from what we could tell by looking into house windows of neighbors and friends. Dead, like the man and the girl in the boat.
Something had happened while we were gone. What, we did not know, could not know. But something happened. Something terrible. Unprecedented. A government test, a virus gone haywire, the frikkin’ Apocalypse—who could say?
We spent the afternoon searching the Internet for news, trying to find a cable channel that was still on the air or a radio station or anything to show that we weren’t alone in the world, but ridiculous as it was, we found nothing. None of the websites we looked at had been updated since Friday evening. Radio offered static, except for one station out of Pontotoc that was on some sort of computer-generated playlist. None of the news channels on cable worked—they were nothing but a wall of blue screens of death, as if they had suddenly gone off the air or just stopped broadcasting or… something. Rory had received no new e-mail since Friday when we’d left. His Facebook page had no updates. His Twitter account had no new tweets. Neither did mine.
The unreality of it washed through me, and I could only sit there and shake my head from side to side in disbelief. There was no way to make sense of it. It was nonsensical, quite literally beyond belief.
“Something must be wrong with the Internet,” I said, taking another stab at an explanation.
Dogs howled, yapped, and moaned from all across the town.
“I wish they’d shut up,” Rory said angrily.
“They probably haven’t been fed,” I said.
“They’re driving me crazy.”
“The Internet must be down,” I said.
Rory, who clutched his Bible tightly, was a ball of nerves and unhappiness.
“There must be some explanation,” I said.
He punched at the keypad on his phone, dialing 911 again. Or the police station. Or the sheriff’s office. He had gone obsessively through his address book that day, calling anyone and everyone[A1] , trying to make contact with someone.
He held the phone to his ear, his hand trembling. He bit anxiously at his lip, waiting for someone to pick up.
“Oh shit!” he exclaimed suddenly, throwing the phone into the front yard and burying his face in his hands.
I put my arm around him.
He shrugged off my arm, stood, looked around wildly as if he meant to run somewhere but couldn’t decide where.
“Come on,” I said, urging him to sit back down.
“We can’t just sit here!” he snapped.
“What are we going to do?” I asked, standing to face him.
“We can’t just sit here like idiots on a log!”
“What do you suggest, Rory?”
He continued to look around, his eyes darting from house to house, car to car, up and down the street.
He didn’t know.
I didn’t know.
“I must be dreaming all of this,” he said quietly. “I must be… this can’t be happening. This isn’thappening. This is… crazy. I’m crazy.”
“Then so am I,” I said.
He ignored me.
His eyes continued to dart about.
He strode off the porch and down the sidewalk.
I trailed after him.
“Rory!”
“This is not real,” he said, not bothering to turn and look at me. “This is bullcrap!”
He headed in the direction of his house, and I followed.
Our footsteps sounded loud, intrusive.
Dogs barked as we passed, perhaps hearing us or smelling us, their hunger sharpened and incessant.
“Rory!” I called after him.


He marched on like I didn’t exist, like I was somehow part of the problem. I grabbed his arm and whirled him around to make him face me.
“Rory!” I said loudly.
His eyes shifted from side to side but wouldn’t meet mine.
“Rory, please,” I said, putting my arms on his shoulders. “Please look at me.”
“I must be fucking nuts,” he mumbled. “I must be out of my fucking mind.”
“If you are, then I am too, Ro, because I’m here. We’re both here. Do you hear me?”
There was a touch of panic in my voice, because I was, well, starting to panic. Rory’s behavior over the course of that day had become increasingly erratic. He was blown out of the water, to use a way overused cliché. Shell-shocked. Struck dumb. Blindsided.
He was losing it.
“Ro, please look at me,” I said, moving closer to him and putting my face right in front of him. “Please, man,” I said earnestly. “You’re scaring me. I’m here too, you know, and I’m scared just like you.”
His gaze finally met mine. His eyes brimmed with tears and darkness. He gazed at me for a long time, as though trying to decide if I was real. Then finally he hugged me tightly and cried into my hair, squeezing our bodies together as if that would give us strength or as if to reassure himself that I was real.

Nick Wilgus grew up on the wrong side of the tracks in a variety of small towns in Michigan. The child of an alcoholic father whose drunken binges left the family in constant poverty, Wilgus has lived and worked all over the world, including almost two decades in Bangkok, Thailand, where he worked as the chief subeditor for the Bangkok Post.

He sold his first short story to The Horror Show when he was seventeen, and has since published more than a dozen novels and a screenplay. He was nominated for a Lambda award for his first gay fiction title (2003) and also received a Best Screenplay nomination by the Thai Film Association (2012) in addition to being named one of the best general columnists in Mississippi (2011).

His work focuses on those thrown away by society and he freely admits to using humor to cope with life’s absurdities.

He currently lives in Tupelo, Mississippi, birthplace of Elvis.

Find out more about Nick and his fabulous books here.

Exclusively on My Fiction Nook, Nick is offering one paperback or one e-copy of
This Is How It Ends to one lucky winner!!