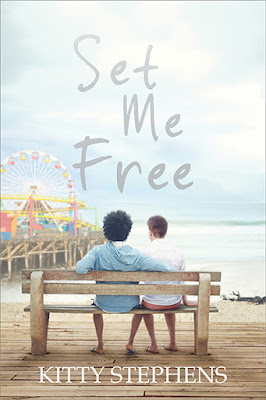 When an affluent college-bound boy falls for a young artist, he must choose between the life that’s been mapped out for him and the chance at true love.

They found a secluded spot to sit off the main drag and scarfed down pieces of pizza and people-watched. Aaron had been full of nerves earlier, but Lucky put him at ease. He had that way about him.
“I’ve got a few minutes left,” Lucky said when they finished their food.
They got up, sipping at their drinks as they made their way through the crowd back toward Lucky’s booth. It was now or never. He had to ask, had to get the words out, or miss his shot.
“Can I ask you something?” Lucky spoke up before Aaron could. Maybe Lucky would… Aaron held his breath, nodding. “It might sound weird.”
“Sure,” Aaron replied, his heart beating a little faster. He had no idea what was coming now; what could Lucky possibly want from him? A kiss?
“Can you take your picture for me?”
Aaron blinked at him. Lucky tilted his head off to one side and Aaron turned his head the same direction. His gaze landed on a photo booth, realization sinking in. His mouth fell open, unsure what to say. It was a little weird because they barely knew each other, but also flattering.
“I’d really like to draw you again.” Lucky seemed slightly embarrassed. “I mean, I could take pictures on my phone if that’s better for you, but that seemed creepier somehow.”
Aaron couldn’t help the chuckle that escaped at Lucky’s words, even as the idea of Lucky drawing him again and again left him breathless. “Um,” he managed to get out, glancing around at the crowd. A familiar blonde head caught his eye and he nearly choked.
Was Lyn at the carnival? Wasn’t she supposed to be with their mothers?
Aaron pulled Lucky by the hand into the photo booth and slid the curtain shut.
Lucky slid money into the slot as they sat down. His breath caught as Lucky’s hands touched his face gently. “Like this,” Lucky whispered, turning his head to the side. The camera flashed. Lucky’s fingers turned his head to the front, pulling away just in time for the camera to go off again. Once again, Lucky’s fingers turned his head to the side, only now he was facing Lucky, staring deeply into his eyes.
Aaron tried not to hyperventilate as he held Lucky’s gaze. The camera flashed for the last time but neither of them moved.
“Go out with me?” Aaron suddenly blurted out. He had to do something or he might do something even more insane, like kiss Lucky. Aaron so wasn’t ready for that yet. Lucky's eyes widened and he smiled.
“Sure,” Lucky drawled after a moment. “When?”

Hi Kitty, welcome to My Fiction Nook. Tell us a little about yourself, your background, and your current book.

My name Kitty Stephens. I currently reside in Ohio, with my husband, my son, and our three guinea pigs. I’ve been an avid reader since I was very young and started writing when I was around nine or ten. Once I had internet access, I became active in fan communities and started posting my work on various fan sites. Set Me Free is my first book.


Tell us about your pets – past or present. Pictures are a must! (Not really, but they would be welcome.)


We have three guinea pigs for our pets right now. My son is extremely allergic to cats and most dogs, so we settled on guinea pigs. They’re all boys, and all completely different personalities. Tribble is the oldest (he’s about a year old). He’s silver and white and black, American breed. He is named after the Tribbles from the original Star Trek series. While he doesn’t resemble them physically, he does in his personality. He’s really content to lay around all day.

Our second oldest is Wookie, named after Star Wars. He also an American breed; he’s tan, brown and black. He’s very much like a Wookie would be–aggressive and vocal! If he’s wound up, we can hear him on the upper level of our townhouse.

We originally got Wookie to be a cage mate to Tribble, but they don’t get along at all. That’s how we ended up with Chewie, our youngest at six months. He and Tribble are cage mates and get along famously. Chewie, of course, is also named after Star Wars. He lives up to name, as he chews on everything! He even chewed up his plastic house. He’s an Abyssinian breed, and his hair sticks up everywhere.

Kitty Stephens’ writing aspirations date back to her childhood, when she and her brother would make up stories about characters in their favorite books. She eventually started writing stories in online fan communities, and majored in English at Ohio State University. She lives in Ohio with her husband and son. Set Me Free is her first novel.