Blogtour: Roped In by Marie Sexton and L.A. Witt 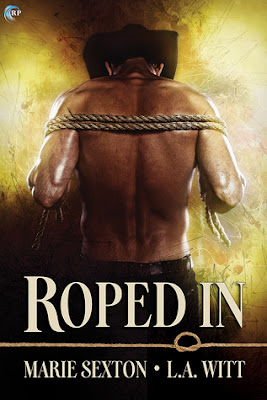 Graham and his roping partner, Jackson, have been friends since they were boys. They've ruled the rodeo scene for ten years running, but lately, Graham’s heart isn’t in the game. He’s tired of the bruises, the cowboy mentality, and the animal rights activists who picket every event. He's also tired of being in love with Jackson, and nothing’s been the same between them since their disastrous drunken encounter the year before.

Then Graham has a run-in with one of the rodeo protesters, and everything changes. Kaz is young, idealistic, and sexy as hell. But he's also a know-it-all, animal-loving vegan, bent on saving the world one cow at a time. They have next to nothing in common, but Graham can't stop thinking about what might happen if they can stop butting heads long enough to give it a try. Unfortunately, no matter how attracted Graham is to other men, he always panics and runs when the clothes start to come off. But Kaz has an idea for getting Graham past his nerves and into bed.

All they need is a bit of rope.


(Note: This is a re-edited second edition of a previously published title.)

Marie Sexton lives in Colorado. She’s a fan of just about anything that involves muscular young men piling on top of each other. In particular, she loves the Denver Broncos and enjoys going to the games with her husband. Her imaginary friends often tag along.

Marie has one daughter, two cats, and one dog, all of whom seem bent on destroying what remains of her sanity. She loves them anyway.

L.A. Witt is an abnormal M/M romance writer who has finally been released from the purgatorial corn maze of Omaha, Nebraska, and now spends her time on the southwestern coast of Spain. In between wondering how she didn’t lose her mind in Omaha, she explores the country with her husband, several clairvoyant hamsters, and an ever-growing herd of rabid plot bunnies. She also has substantially more time on her hands these days, as she has recruited a small army of mercenaries to search South America for her nemesis, romance author Lauren Gallagher, but don’t tell Lauren. And definitely don’t tell Lori A. Witt or Ann Gallagher. Neither of those twits can keep their mouths shut . . .


To celebrate the release of Roped In, Marie and L.A. are giving away $20 in Riptide Publishing credit plus one ebook from each of their backlists. Leave a comment with your contact info to enter the contest. Entries close at midnight, Eastern time, on June 25, 2016. Contest is NOT restricted to U.S. entries. Thanks for following the tour, and don’t forget to leave your contact info!