Blogtour: No Master by Christine D'Abo 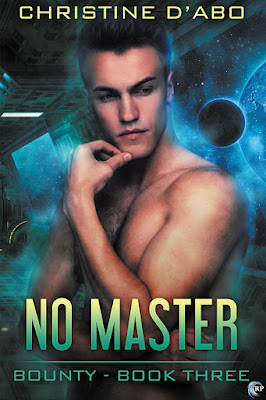 No man in the galaxy inspires more fear than Korbin, the Admiral of the Black. His life as leader of the biggest pirate band in space leaves little room for trust, so when Korbin’s second-in-command disappears without a trace, he suspects the worst.

Zain Strand has left his life as a sex slave behind and risen within the pirate ranks. But he abandons it all to rescue an old friend from recapture by the slavers—even if that means a suicidal confrontation with his old master. He doesn’t expect Korbin’s arrival, doesn’t want Korbin’s help . . . but Korbin gives Zain no choice.

Posing as master and slave to infiltrate a slave auction, Korbin and Zain embark on a journey of lust that rapidly reveals their deeper feelings. When Zain’s old master discovers their ruse, Korbin must do everything in his power to save both their lives and their newfound love.

Publisher’s note: While books #1 and #2 in the Bounty series should be read in order, this book stands alone and can be read without the first two.

This title is an edited second edition, previously published in 2011.


Hello, my name is Christine d’Abo! Thank you so much for having me here on the blog today.

There’s something special about the last book in a series. In the case of my Bounty series, I wanted to explore a character that held more power than some of the previous characters. Korbin, the Admiral of the Black is the de facto leader of the space pirates; a dangerous man who is not to be trifled with. The only man to come close is Zain, the Admiral’s second in command and the one person who knows all of his secrets.

Too bad for Korbin, Zain has more than a few secrets of his own.

I loved playing with the master/slave dynamic with these two men. The power exchange in their professional lives becomes confused when they must take things to the next level. Zain’s past as a freed sex slave makes every interaction with Korbin painful when they are forced to pretend to be master and slave. It forces them to confront their feelings for one another, something they wouldn’t otherwise have done.

Not to mention the sex.

Did I mention the sex?

I hope you enjoy the final tale in the Bounty series.

A romance novelist and short story writer, Christine has over thirty publications to her name. She loves to exercise and stops writing just long enough to keep her body in motion too. When she’s not pretending to be a ninja in her basement, she’s most likely spending time with her family and two dogs.

To celebrate the release of the Bounty series, one lucky person will receive a $50 gift certificate to Riptide. Winner will be selected from across all three book tours (No Quarter, No Remedy, No Master) and as such, the contest is open until midnight, Eastern time, on July 2, 2016. Contest is NOT restricted to U.S. entries. Comment to enter, and don’t forget to leave your contact info!