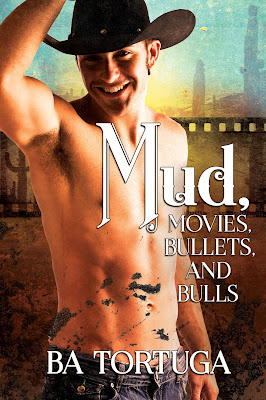 Four men in need of a helping hand….

When a cowboy finds he has grit in all the wrong places, what is he to do? Meet the man of his dreams, of course. But what will save two cowboys from getting bogged down in the mire?

An ex-rodeo cowboy who hates working with Hollywood actors meets a movie star who is looking for something real. Will they get a happy ending, just like in the movies?

A redneck ends up injured and stranded, and his old friend comes to the rescue. It’s the old story of the one that got away. What will they do to keep each other in their lives—and will it be too late?

A professional bull rider is starting to feel his age. When he’s injured far from home and his career is threatened, it’s up to his best friend to step in and point out the other options. Both men have plans—but will they include each other?

Did you know there are cowboys in Hawaii?

Hey y’all. I’m BA Tortuga and I write about cowboys – from working ones to redneck broke-dick ones to rodeo ones. ;-)

Did you know they have cowboys in Hawaii? I know, right? No one thinks cows when they think of paradise, but they arrived in the late 1700s. Longhorns, in fact! (Hook ‘em!) Well, a predecessor of the modern longhorn. Horses arrived in 1805. But it was in the 1830s that the cowboy culture boomed. A man named Parker contracted a bunch of what we know as Mexican vaqueros, who brought boots, saddles, and the know how to work the cattle and horses in a profitable way.

These cowboys were called “paniolo” and the tradition survives to this day on ranches like the Kahua Ranch.

I found about this wonderful culture years ago when a bullriding tour I follow went to Hawaii for a big exhibition. I was fascinated by the idea of green breaking horses in chest high salt water. Easier for the horse to carry weight, easier for the cowboy because the horse can’t buck as much. I was also stunned to learn the paniolo used to swim cows out to rowboats three or four at a time, then row them out to ships to deliver them to markets.

So, when I read and watched all about this, I wanted to write paniolo. Now, I didn’t, because honestly, until I get a chance to go to Hawaii and visit a ranch, I don’t feel qualified to tell those men’s stories. But what I could do was write a bullriding there. Bullriding I know, and it was great to get to give a nod to the islands as a place where cowboys have lived and thrived, where rodeo is still king and ranches still take pride in teaching people the old ways.

Long live cowboys, y’all. No matter where they come from. I sure do love them all!

Texan to the bone and an unrepentant Daddy's Girl, BA Tortuga spends her days with her basset hounds and her beloved wife, texting her sisters, and eating Mexican food. When she's not doing that, she's writing. She spends her days off watching rodeo, knitting and surfing Pinterest in the name of research. BA's personal saviors include her wife, Julia Talbot, her best friend, Sean Michael, and coffee. Lots of coffee. Really good coffee.