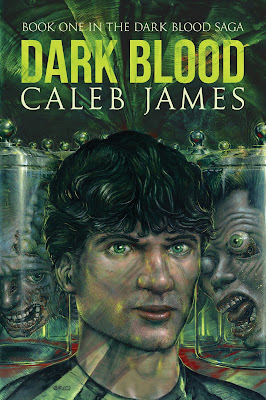 Handsome, brilliant, and surrounded by good friends, twenty-three-year-old medical student Miles Fox has a secret. It's not that he's gay, though he harbors a crush on his straight best friend, Luke. Miles, like his grandmother Anna, possesses the healing gift, an ability she's made him swear never to use or divulge, lest horrible things befall those he loves. It happened to her when her family was butchered by Nazis.
It all goes to hell when Miles heals a terminally ill father on a New Orleans cancer ward and wakes to find himself on a locked psych unit. Worse, news of the healing miracle has spread. For millennia, its carriers have been hunted by those who would steal it. Dr. Gerald Stangl and his teenage son, Calvin, know what Miles possesses. They, like their predecessors, will stop at nothing to take it, including kidnap, torture, and murder. As the Stangl's noose tightens, Miles and Luke are trapped in a death match, with stakes higher than they could ever imagine.

A Caleb James Ramble on Heads in Jars and Why You Should Consider Medical School
By: Caleb James, Charles Atkins, & Dr. Atkins
Not to burst anyone’s bubble, but here’s the deal. Writing is work. It pays poorly—the average author makes less than ten-thousand dollars a year—and people don’t understand why you don’t just give your books away. “Books are so expensive, couldn’t you give me a free one?”  As a well-published author, I can tell you that getting to the point where writing pays the bills is a trek. True, there are some who hit it out of the ballpark the first time at bat, but they’re quite rare, and whenever I meet one, it takes all I have to not bash them over the head and toss them in a dumpster.
So thank God—Goddess if you prefer--I went to medical school. Which among other things, gave me scads of rich experiences—such as a year in gross anatomy cutting apart a human body. Other than serial killers, who gets to say that? Plus, there’s that night I opened up the stainless steel box in the corner of the lab to find a dozen or more heads in various stages of dissection. I’ve used that memory in a number of books including Dark Blood—check out the cover. Nothing like heads in a jar to perk the reader’s interest. All thanks to the fabulous illustrator/artist/author and general bon vivant Alan M. Clark.
But back to why writers write, or at least why this one does. I have to. I don’t go more than a day without writing, and to be honest, I can’t remember the last time I skipped a day. Oh wait, it was a couple years back and I had flesh-eating bacteria crawling up my leg. I was in excruciating pain, deathly afraid the drugs wouldn’t work, and hobbling around the house with a carved wooden Mardi Gras death-head walking stick. Seriously, who keeps canes around? It was all very Game of Thrones. Fortunately, it did not end with either my head on a pike or my leg getting sawed off.
For me writing is a passion. Folks often ask, which I would give up first, being a doctor or being a writer? While I try to stay political and not piss off the Gods who saw fit to get me through premed and med school, I’d ditch the doctor thing first. To make it all work I’ve structured my life—and have done so for the past twenty years—to be spent half writing and half doing something medical. At present I’m the medical director for a community agency in Connecticut that works with people who have severe substance use and mental health problems. In fact I wrote a textbook on the subject, though quite possibly not the sort of thing for my Caleb James fans.
For the savvy reader, you’ve caught the connection between the psychiatry thing and my books. In Haffling, Alex’s mother has schizophrenia, and it takes all he has to keep sister Alice and himself out of the clutches of various social-service agencies… not to mention a mad fairy queen who turns into a giant fairyfire spitting salamander. In Dark Blood, my villain, Dr. Gerald Stangl, is my Nazi-lineaged psychiatrist. He’s the one putting those damn heads in jars. So yes, everything is connected. The butterfly beats its wings and a fairy is born in some addled author’s head.
In fact my entire writing career, starting as Charles Atkins, then Dr. Atkins (books on psychiatric stuff), and now Caleb James has closely followed my clinical work. My first thriller—The Portrait (St. Martin’s Press)—had a hero with manic depression. From there I was working with a lot of children who’d been referred by school systems and juvenile court, which led me to write Risk Factor (St. Martin’s Press) in which I let the reader see how you too can turn your child into a murderous sociopath. It was my nod to Frankenstein.
So while every writer must find their own path, here are my keys to success so far—and I’ve had well over a dozen traditionally published books, hundreds of articles and blah blah blah. I’m even on the volunteer faculty at Yale. If you want to write books, set aside some time every day to do it. If having a roof over your head and food in your belly are also important, find a career that pays the bills, doesn’t suck your soul dry, and adds fuel to your creative fire.

While not for the squeamish I heartily recommend medical school for aspiring authors. You’ll get your own heads-in-jars moments, more stories than you’ll know what to do with, and you’ll be on a journey that’s been taken by doctor authors from Conan Doyle and Somerset Maugham to Michael Crighton, Tess Gerritsen, and me.

Caleb James is an author, member of the Yale volunteer faculty, practicing psychiatrist, and clinical trainer. He writes both fiction and nonfiction and has published books in multiple genres and under different names. Writing as Charles Atkins, he has been a Lambda Literary finalist. He lives in Connecticut with his partner and four cats.