Please extend a warm welcome to D.B. Reynolds and 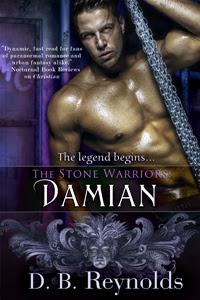 It was a time when gods walked the earth, when armies fought not for bits of land, but for the very existence of humanity. On such a battlefield, five formidable warriors stood against an evil greater than any the earth had ever seen. But evil is not an honorable foe. Betrayed by someone they trusted, the warriors were cursed, one by one, tossed into the maelstrom of time, imprisoned in stone, their freedom resting on nearly impossible conditions. Until . . .

Damian Stephanos honed his skills in battles fought with magic as much as swords. Caught by a deadly spell that left him trapped for centuries in darkness and obscurity, he is finally freed, only to discover that his enemy still lives. Determined to find him—and to free his brothers in arms—he first must fulfill his blood debt to the woman who released him from his torment. Unfortunately, being so close to this enticing female is another type of torment altogether . . .

Cassandra “Casey” Lewis is a hunter. Possessing the rare ability to sense magic, she spends most of her time shadowing arcane collectors, and more often than not, stealing the dangerous artifacts she pursues. Her job is risky, especially when she’s stealing from one of the most powerful sorcerers alive. But having a gorgeous warrior by her side is a definite bonus. He’s great in a fight . . . and in other places, too.

Following a trail of dead bodies, the two of them must join forces to track down the sorcerer who cursed Damian, and who now plans to turn an ordinary magical device into a deadly weapon. Risking everything, including their hearts, they’re about to discover that trusting each other might be the hardest thing of all.

Reporter: So, Michael, I understand you saw the break-in last night?

Michael: Break-in? I saw this chick running down the street, and she was all bloody and stuff, like she’d been shot. And first she shot up the Sullivan Building, then she ran across the street to the Kalman. And, like I told the cops, it looked like she had a door code for the Kalman.

Reporter: And what happened next?


Michael: Well, I couldn’t see much. My office looks down on the street on the same side as the Kalman. But I did see these ninja looking dudes, and they were chasing her with dogs, man. Big **expletive deleted** dogs.

Michael: Big **expletive deleted** dogs, lady. Like I’ve never seen before. Anyway, after that there was a bunch of gunshots, and then I saw one guy run away, like, back the way they came.

Reporter: And what happened then?

Michael: Well, I can’t say for sure, but . . . I have a friend over in the Kalman, and (Michael looked around suspiciously at this point) the cops over there are saying that the Kalman Guardian is missing, that it just disappeared. Like maybe that woman stole it.

Reporter: The guardian. Okay, I’m being told the police are about to make a statement. Back to you, Chuck.

D. B. Reynolds is the RT Award-winning author of the Vampires in America series of paranormal romance, and an Emmy-nominated television sound editor. She lives with her husband of many years in a flammable canyon near Los Angeles, and when she’s not writing her own books, she can usually be found reading someone else’s. Visit her blog at www.dbreynolds.com for details on all of her books, for free stories and more.