Please say hello to J.A. Rock as we're closing out the tour for


Hi! I’m J.A. Rock, and right now I’m touring the internet talking about my latest release, 24/7—Book 4 in The Subs Club series. Thanks so much to the blogs that are hosting me on this tour, and be sure to leave comments on the tour posts for a chance to win a $15 Riptide Publishing gift card!

About the Subs Club series

After the death of their friend Hal at the hands of an irresponsible dom, submissive friends Dave, Kamen, Miles, and Gould band together to form the Subs Club—an organization seeking to expose dangerous local doms. The club slowly evolves as romances blossom, loyalties are tested, and tensions mount in a community already struggling for unity in the wake of Hal’s death.

From domestic discipline to knife play to fashion paraphilia, and from family drama to new jobs to first loves, the members of the Subs Club explore life’s kinks inside and outside of the bedroom as they attempt to let go of the past and move forward. 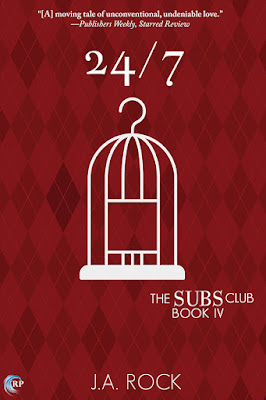 We started the Subs Club to make the kink community safer for subs. Except now the others are so busy chasing their happy endings, it’s like they’ve forgotten what Bill did to Hal and the fact that he got away with it. They used to think I was betraying Hal’s memory by hooking up with the owners of the club where he died. Now they don’t seem to care about any of it anymore.

Maybe I am sometimes angry with GK and Kel for giving Bill a second chance, but they’ve been mentoring me for a year now, and whatever else they’ve done, they make me feel incredibly safe. So I want to try something: I want to offer them my complete submission, 24/7. To serve the people who forgave Bill. That’s the way I want to hurt.

Except I’m starting to care about them in a way I never meant to—and I think they feel the same way. But after Hal, I don’t know if I want to be in love again. Because what I really need, more than anything, is to see Bill brought to justice. Even if I have to do it myself. Even if it means losing GK and Kel.

Saying Goodbye to The Subs Club

At the risk of writing a super self-indulgent post, I just wanted to say goodbye—for now—to the Subs Club series and thank those of you who have stuck with these characters to the end. I was hesitant about committing to a solo series (at least if I write a series with Lisa Henry, she can force me to see it through), but I had more fun writing the Subs Club books than I’d ever anticipated. I grew very close to these characters, and I hope at least some of you did too.

I wrote the first draft of The Subs Club several years ago, with no plans to make it a series—and even after it got contracted as a four-book series, I don’t think I realized how immersed I was going to be in this world, and for how long. I’m really glad I got a chance to do some growing up between that early draft and the series contract. I feel like the past few years of my life helped make this a story not just about kink, but also about friendship and growing up and trying to reconcile your past, present, and potential selves. I flailed my way through some adulting attempts of my own, and watched my friends find partners, find homes, start businesses, navigate things like homeowner loans and Bed Bath & Beyond and wedding planning...while I offered moral support and secretly used all their struggles as writing fodder.

Gould’s story, perhaps more than the others’, is about how we hold onto the past even as we grow older and shed certain aspects of ourselves—while gaining new, unexpected elements to lives and to our identities. 24/7 was the toughest of the four books to write, but it was also surprisingly cathartic. Thanks for letting me share these characters with you, and hope you enjoy the conclusion of The Subs Club.

J.A. Rock is the author of queer romance and suspense novels, including By His Rules, Take the Long Way Home, and, with Lisa Henry, The Good Boy and When All The World Sleeps. She holds an MFA in creative writing from the University of Alabama and a BA in theater from Case Western Reserve University. J.A. also writes queer fiction and essays under the name Jill Smith. Raised in Ohio and West Virginia, she now lives in Chicago with her dog, Professor Anne Studebaker.


J.A. Rock is giving away $15 in Riptide Publishing credit. Leave a comment to enter the contest. Entries close at midnight, Eastern time, on June 11, 2016. Contest is NOT restricted to U.S. entries. Thanks for following the tour, and don’t forget to leave your contact info!