ARC Review: A Kind of Romance (A Kind of Story 2) by Lane Hayes 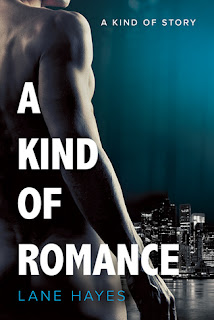 
Zeke Gulden is a ruthless Wall Street exec. His hard-edged, no-nonsense attitude has served him well in the cutthroat business world, but less so in his personal life. When he finds out his ex-boyfriend cheated on him with a coworker, Zeke can’t let go—not until he finds a way to get even. However, his meddlesome father has other ideas. The new hire at the family-owned bagel store is somewhat colorful, but his dad is sure he’s the perfect man for Zeke.

Benny Ruggieri is a fiercely proud New Yorker who dreams of making it big as a costume designer in the theater. In the meantime, he’s working two part-time jobs in the food biz. When his new boss sets him up with his successful son, Benny has zero expectations. If nothing else, he figures he can entertain himself by making the uptight businessman squirm. Instead, the two become unlikely friends with an inexplicable attraction they can’t ignore. Benny might be the one to help Zeke set aside his quest for revenge, if he’s willing to let go and forgive what he can’t forget… and give in to an unexpected kind of romance.

Zeke (only his dad, who doesn't believe in shortening first names, calls him Ezekiel) first meets the boy with the blue hair at a hospital. Benny works for Zeke’s dad George at the family bagel shop (where Rand worked in book 1). When George falls and hits his head, Benny is frantic. He loves George. Everybody loves George … everybody but Zeke.

That’s not quite right. Zeke loves his dad, of course he does, but Zeke doesn’t forgive easily, holding on to hurts and resentments. George, a current member of PFLAG and the nicest man in the world, is a reformed homophobe. Growing up gay on planet George wasn’t easy. George belittled femme men and shamed Zeke every chance he got.

It was Zeke’s mom who was his rock, his support. Now his mom is gone—not dead, but gone nevertheless. She doesn’t remember Zeke or his brothers or her husband George. She only remembers the roses.

Without his mom as a buffer, Zeke barely tolerates George and certainly doesn't want to date the man his father not so subtly pushes his way: the flamboyant, talkative Benny.

The book is told from Zeke’s first-person perspective, so we see Benny only through Zeke's eyes. At one point, Benny accuses Zeke of not really seeing him, but we know that Zeke does. He SEES Benny. He just doesn’t know how to show it, how to say it.

Benny and Zeke are very different people. Benny is Italian Catholic (no worries; there's no religious guilt, Catholic or otherwise, in this book) and an aspiring costume designer. He's quirky and sweet. He puts streaks in his hair and wears slightly outrageous clothing. He laughs easily; adores his big, boisterous family; and looks hot in tight shirts (he looks even better naked, but I digress).

Zeke is not like Benny. A third-generation Polish Jew (YES! Can we get a round of applause here, people?), Zeke is a successful lawyer who works long hours and doesn’t have time for relationships, especially with "obviously gay" men like Benny. Zeke’s expensive clothes, tastefully decorated flat, personal driver—all of it is for show. Zeke has something to prove.

But Zeke can’t help falling for Benny. What starts as clever matchmaking by the meddling George turns into an easy friendship. The two men banter and tease. They both like dirty sex (the scene against the pool table—OH, MY!) and just click on every level. Benny really gets Zeke’s anger and inner turmoil.

Zeke calls Benny his boyfriend and doesn’t want Benny seeing other people (even going as far as sabotaging Benny's date with another man), but when he talks to Benny, he plays it off as pretend. He doesn't want to define the relationship.

The tender joining of the lips felt like coming home. As though every sign, every turn, ever moment before this one was leading me here. To him.

Before Zeke can really be with Benny, he has to learn to forgive and forget: forgive his dad who has redeemed himself a hundred times over, and forget his cheating ex who had an affair with one of Zeke’s coworkers.

There were times I wanted to strangle Zeke for his hardheadedness. He has so many ideas in his head of how things should be that he can’t appreciate what’s right in front of him.

More than anything I wanted Benny’s POV, but this is Zeke’s story more than Benny’s. It's a story about family and forgiveness and singing Gershwin in the moonlight. The epilogue made me swoon. It was poignant and tender, the BEST kind of HEA for two men who really deserve it.

Hayes is a very talented writer. I read an ARC of this book, and it was publication ready, no typos or editing issues. That is how it’s done, ladies and gentlemen.

This story made me cry a little. But it also made me smile a whole lot. Benny is a dream, and when Zeke comes around, he brings a Snickers bar. Trust me, it’s crazy romantic. As a bonus, Hayes includes a couple short scenes with Will and Rand who are as cute & happy as ever

I’m betting Carter, Zeke’s best friends, is up next, and I cannot wait. Carter is wise you see; as he tells Zeke:

“You give yourself away every time you look at him anyway.”