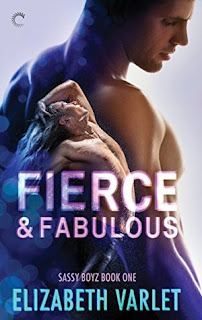 
The first book in a scorching new male/male series by Elizabeth Varlet. Behind the Sassy Boyz's seductive smiles and sinful dance moves are desires that will leave readers breathless.

Fitch Donovan never thought a lap dance could change his life, but from the moment the gorgeous dancer’s lips touch his, his world comes screeching to a halt. No matter how hard he tries, he can’t shake the desire that rocks him to his core. He’s longed for this passion all his life—he just never dreamed he’d find it with another man.

Sharing a soul-shaking kiss with a straight boy is the kind of drama Ansel Becke just doesn't need. Spotlights aren't made for two and Ansel prefers to keep things on a one-night-only basis. So when Fitch shows up asking for an encore, Ansel knows he should send his gorgeous ass packing.

Though Ansel tries to pretend that what's between him and Fitch is far from fabulous, there's something about the big, burly contractor that makes Ansel's world sparkle in a way no amount of glitter ever could. And Fitch will do whatever it takes to convince Ansel that when the thing you need most in the world falls right into your lap, you’d be a fool to let it go.

I heart the Sassy Boyz! This book was so much better than I expected.

Everybody needs a Fitch in their life. Fitch, who has just taken over his family's construction business, has only ever been attracted to women, but the moment he lays eyes on Ansel, he's a goner.

Fitch struggles a bit with his attraction to a man, but his sister is gay, which makes it that much easier to admit that no one pushes his buttons like Ansel.

And then there's ANSEL.

Ansel is sultry and femme. He loves lipstick and high heels. And he moves like spun silk.

But being beautiful and androgynous isn't easy. Ansel's mom slapped him the first time she caught him wearing her clothes, and the abuse never stopped. Insecure and damaged, Ansel hides behind snark and alcohol.

This isn't a slow burn story, but it feels like one. The first time Ansel & Fitch meet, Ansel gives Fitch a slow-grind lap dance; the second time is all fast & hard. Ansel is terrified of falling in love, but Fitch can't let Ansel go.


Fitch doesn't push; he's steady and kind. He keeps his promises. Even when Ansel, in a moment of self-sabotage and despair, does the unthinkable, Fitch doesn't give up on his dancer, his Angel.

"When you shut the door it was like you shut out the sun. All the light, the warmth, the joy, it all vanished and there was an Ansel-shaped hole in my world. I won't let you hide anymore, Angel."

The cast of secondary characters is awesome. I loved, loved, loved all the Sassy Boys and want their stories. Fitch's sister and parents are pretty great too. Friendship & family—what more do you need?

I liked the dual third-person POV, age gap (Fitch is almost 30 to Ansel's 23), comfort-healing (the way Fitch accepts Ansel, flaws and all, is just beautiful), and SWEET (but not too sappy) ending.

If you like plenty of SMOKIN' SEXY action (delicious dirty talk included), heart-melting ROMANCE, light angst, boys who dress like girls but love being boys (the best kind of gender-bending!), and stellar writing, look no further.

This book is a win. I can't wait for more!


Download links are provided as a courtesy and do not constitute an endorsement of or affiliation with the book, author, publisher, or website listed.