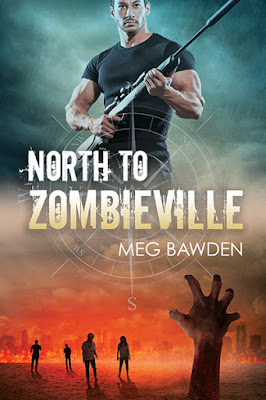 The year is 2028, and Dallas and Raleigh Jenson are torn apart when a worldwide zombie apocalypse ravages their home of Townsville, Australia. After a year of searching, Dallas, a former Australian army rifleman, finally reunites with Raleigh, but it’s not like old times. Not only do they have zombies to contend with, but also other humans, changed by desperation and willing to do anything to survive.

Dallas and Raleigh have changed too. So much so, that Dallas struggles with the idea that Raleigh no longer needs or wants his protection. But they will need to rely on each other and find strength in their love as they are forced to evade zombies and watch their friends die. As they fight for their lives in a brutal landscape where every supply and every step toward a potential cure is a battle to the death, only their trust in each other can keep them from perishing.

One of the men nudged with a car spun around, eyes flashing a dark red as he slammed his hands on the hood. The hood made a crunching sound, and the man screamed, spit flying from his mouth as he pounced on the crumpled hood. The woman in the car shrieked and jumped out, kicking off her heels and running down the street with the mobs. But the man obviously wasn’t going to allow that. He ran after her. He wasn’t fast, but he was fast enough to catch her. He grabbed her by the hair, jerking her backward. She screamed again, but he threw her on the ground and tore at her neck like a starving cannibal.
Dallas made to move toward them, but the woman’s scream turned into a gurgle and then nothing. It was too late. Dallas could have saved her life, but he hadn’t. He couldn’t. He needed to find Raleigh. He needed to protect his husband.
“Raleigh?” His voice cracked under the strength of his roar. Yet it was barely audible over the cries of fear filling the street.
The woman from the restaurant dragged herself out of the Strand Delight. She stretched out toward Dallas, a stupid grin on her face that caught bloody teeth flashing at him.
Dallas acted on adrenaline. He ducked beneath her arms, spinning until he was standing at her back, then grabbed her head, twisting it hard and quick until her neck snapped and she fell to the ground, lifeless.
He dropped to his knees, his stomach churning in fear and desperation as the need to vomit slammed into him. But he held it in.
“Raleigh….” he whispered, biting his lip hard. He needed to find his husband.
Something shone in his eyes from under the lamplight and he immediately zeroed in on Raleigh’s phone. He grabbed it, tapping it desperately, but it was dead. “Dammit!” he growled. “Raleigh, where are you?”

Hi Meg, thank you for joining us today. Tell us a little about yourself, your background, and your current book.

Hi! Thank you so much for having me. So, my name is Meg, as you know, and I am an Australian author. I’ve always loved writing, but never thought I’d get to a point where I could submit my work to be published. When you’re growing up, being a writer seems like nothing but a dream, but it was a dream I wanted to follow. I’d been writing M/M since 2007, but never had the bravery to submit something, much less finish it to begin with. Dreamspinner Press has always been my first preference and when I finally finished North to Zombieville, I knew it was them who I wanted to submit it to. I expected a rejection, so when I received my acceptance email, I was beyond thrilled. I nearly cried.

North to Zombieville is a science fiction/horror story set in the future. 2029 to be exact. It’s based around a married couple, Dallas and Raleigh Jenson. Dallas is a former army rifleman, while Raleigh is a photographer. During the zombie outbreak, they are driven apart and Dallas makes it his mission of find his husband. When they finally do reunite, the horror of the torn apart city of Townsville, Queensland, has taken a toll on both of them. This story is about survival, love and friendship. It’s about believing in each other and relying on others to survive each and every day against strong and dangerous creatures.

It’s my first novel I completed and I’m quite proud of it. :)

Meg Bawden was born and raised in North Queensland, Australia. She’s loved stories since before she can remember and has always enjoyed creating characters of her own, even if it did begin with drawing faces on toilet rolls and giving them names. Wiring has always been a passion of hers and she’s loved the M/M genre since 2004, the first book she read being Rainbow Boys by Alex Sanchez.

Writing M/M since 2007, Meg has never had the confidence to attempt publishing her own stories, but in 2015, she decided that it was all about to change thanks to the amazing friends she’s made in the M/M genre and their support and encouragement. So watch out world, Meg Bawden is coming out to have some fun!