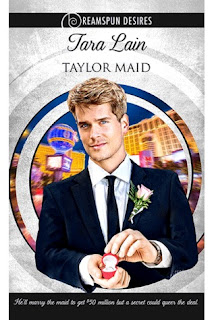 He'll marry the maid to get $50 million but a secret could queer the deal.

On the eve of his twenty-fifth birthday, the billionaire’s son discovers that despite being gay, he must marry a woman before midnight or lose a fifty-million-dollar inheritance. So he hightails it to Las Vegas… where he meets the beautiful maid Ally May.

There’s just one rather significant problem: Ally is actually Alessandro Macias, son of a tough Brazilian hotel magnate. But if Ally keeps pretending to be a girl for a little while longer, is there a chance they might discover this marriage is tailor-made?

Another fabulous installment from the Dreamspun Desires series, and my first foray into the writings of Tara Lain.

On the day before his 25th birthday, Taylor Fitzgerald overhears his father during a phone call and figures out that his grandfather's will has a little clause that could cost him $50 million. Shocked and in disbelief, Taylor hops on a plane to Las Vegas to tie the required knot just in time.

Except the escort he hired to marry him is delayed, and Taylor is desperate. Enter the maid from his hotel. In dire need to marry, Taylor blurts out his offer. "Marry me."

Ally, the maid, is a bit shocked, but agrees. They marry in a hasty ceremony, just before Taylor's father's lawyer shows up to question the validity.

See, Taylor is gay. Has been, and everyone knows it, including his father, who apparently thinks that the clause in the will gives him all kinds of rights he doesn't have.

But Ally is hiding a secret. She, well, he is really Alessandro Macias, heir to a hotel empire, and running from his father's idea of forcing him to marry a nice Brazilian girl. Taylor offers Ally a way out.

This was a fun read. Taylor questions his attraction to the maid, whom he assumes is female, and doesn't quite understand why his nether regions are perking up when he gets close to the girl (who's not a girl at all). When they get back to Taylor's home, and he takes Ally to the gay club to meet his friend (one of whom is a drag queen), the truth comes out, and Ally comes clean.

Then sexy times happen. And then Daddy Dearest wants to meet Ally. That scene was utter perfection, and I enjoyed every minute of it.

Of course, then the author turns up the drama dial all the way, and we have a kidnapping, a reclaiming, and a confrontation with Daddy where he gets a dose of his own medicine.

As I said, this was a fun read. Super OTT, as expected, slightly kitschy, with a conclusion that I saw coming a mile away, and that nonetheless left me with a huge smile on my face.