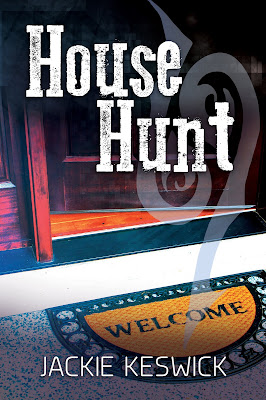 Jack Horwood hates owing favors. But when a simple day out to treat Gareth to the best oysters in England leads to a discovery of drugs and counterfeit money—things that neither Jack nor Gareth have the jurisdiction to handle—he has to call in help. Help that doesn’t come cheap, and that forces him to do something he promised himself he’d never do again—walk away from Gareth and the family he’s starting to make for himself.

Three months undercover is a long time. After missing Gareth’s birthday, Jack is determined not to miss their first anniversary. But coming home and being home are two very different things. So when he is asked to assist with a corporate espionage investigation, Jack can’t say no, despite knowing it will impact his already straining relationship.

Except, of course, he’s walking into a trap….

I'm very excited to be at My Fiction Nook today, talking to you about House Hunt, the latest book in the Power of Zero series.
Telling the story of Jack and Gareth and the two boys they rescue and make part of their family can get tricky at times. Jack doesn't talk much about his feelings. For too many years he's had neither the need nor a person to talk to and old habits die hard as the saying goes. It doesn't mean that Jack isn't in love with Gareth or that he doesn't appreciate what they're trying to build together. Just that he prefers to let his actions do the talking.
To show what I mean I'd love to share one of my favorite scenes from House Hunt with you.
It's nothing overly dramatic, just something that shows how much Jack is prepared to step out of his comfort zone for Gareth. I find that the lengths Jack goes to and the care he takes are as good as a declaration.
If you're acquainted with Jack and Gareth, you'll know that Gareth loves to cook and that Jack - to put it mildly - doesn't. Which works out well, since it gives Gareth a chance to look after Jack when Jack is tired, hungry, overcaffeinated and his temper is fried. But what if the shoe were on the other foot? What if Gareth were late coming home from a very vexing and annoying training course he'd foolishly agreed to teach? What if Jack knew that Gareth was stuck in traffic and that he'd be fed up and hungry when he gets home…?
Well… in this case Jack heads over to Rachel Whitestone’s deli in search of food and instruction.
Simply stepping into the deli got him a smile so wide it made him fear for Rachel's ears. “Oh, my God, Jack! I haven't seen you in ages! How are you?”
“Fine.” He leaned over the counter to give her a one-armed hug. “And in need of some help. You know how my kitchen skills are sort of….”
“Lamentable? Nonexistent?”
“Yeah. Gareth is on the way home from Cardiff, the M4's a mess, and I'm thinking he might appreciate dinner when he comes in. So….” He smiled rakishly. “You think you can sort of help me out there?”
“Well—” She sighed playfully, looking around her domain. “—this is a deli, so you've come to the right place. What do you want to eat?”
“I dunno. Food?”
“You're hopeless.”
“And that's news? Come on, Rachel… you know how well I can't cook. Gimme something that I can't ruin and that Gareth will like to eat when he comes home late and hungry and most likely cranky as hell.”

Rachel, as Jack has known, comes up with the goods. A large basket of them, in fact. Jack isn’t entirely convinced he can handle all that, but he puts on a brave face and listens as she walks him through her ideas for dinner.

“Starter's easy. Garlic bread… just needs to go into a medium oven for ten minutes. Medium is around 150 to 170 degrees. Set the timer and check after seven minutes, okay?”
Jack nodded dutifully to indicate that he'd heard. She didn't need to know that he was recording their conversation.
“Salad to go with the garlic bread.” She placed two bags of multicolored leaves next to the baguettes and added a bottle of dressing. “Add the dressing when you're about to sit down to eat. No sooner or the leaves will wilt. Just shake the bottle and pour it over.”
“I think I can manage that.” Jack waved at the other items in the basket. “What's all this?”

All this covers the main course and pudding and Jack’s starting to wonder whether he’s bitten off more than he can chew. When he’d had the idea to surprise Gareth with dinner rather than order in, he’d not planned on a three-course meal. I can see him getting slightly antsy here, wondering if he has a second tablet at Gareth’s house and how many timers he would need for keeping track of all the ingredients Rachel was laying out on the counter and the things she wanted him to make.

Rachel held up a large jar next. Unrecognizable, multicolored bits and pieces floated in oil and when she shook it, the jar looked like the culinary version of a snow globe. “This is the marinade for the steaks.”
“You remember that I can't cook, right?” Jack eyed the jar with trepidation. In his limited experience, oil meant frying pans and chopping things up and—more often than not—burning them beyond recognition.
“I'm sure you know how to take a bath.”
“We're discussing dinner, not personal hygiene.”
Rachel had the kind of laugh that eased headaches and put smiles on people's faces. It was one of the reasons Jack frequented the deli when food shopping was so much more easily done online. The other was that she knew Gareth's tastes almost better than he did. And that she was never fazed by questions.
“It's no different, really. I think you don't cook because you've convinced yourself it's difficult when it's really not.”
“I don't cook because I almost burned down a curry house the last time I tried,” Jack corrected her, just because he wanted to hear her laugh again. She'd already been told the story of how a random, work-related text message had distracted him in the middle of the cookery class, and he had completely forgotten what he was meant to be doing.
“Well, you're not burning anything this time,” she soothed.

Rachel then goes on to tell him how to marinade steaks. Jack’s ears are on stalks by that point and his head is buzzing. He’s doubly glad now that he decided to record the lot. That way, there’s no chance of him missing anything important. While he’s dubious about the whole thing, he’s also getting a bit excited by imagining Gareth’s face when he realizes he doesn’t have to cook when he gets in. The image relaxes him enough to tease Rachel.

“No instructions for baking the cake?”
“It's a tart. You eat it cold with cream. Really, Jack… stop pulling my leg!”

And so instructed Jack heads out, determined to feed Gareth for once. Which, I'm happy to say, he does. With the help of Rachel’s instructions, four countdown timers and a clock, and without burning the steaks or burning down the neighborhood. Now… can we all agree that Jack's in love?

Jackie Keswick was born behind the Iron Curtain with itchy feet, a bent for rocks and a recurrent dream of stepping off a bus in the middle of nowhere to go home. She's worked in a hospital and as the only girl with 52 men on an oil rig. She's spent a winter in Moscow and a summer in Iceland and finally settled in the country of her dreams with a husband, a cat and a tandem. Jackie loves stories about unexpected reunions and second chances, and men who don’t follow the rules when those rules are stupid. She has a thing for green eyes and tight cyclist’s butts and is a great believer in making up soundtracks for everything, including her characters and the cat.

Jackie's current obsession is a green-eyed hacker-turned-vigilante by the name of Jack Horwood. The first two parts of his story, Job Hunt and Ghosts, are available from Dreamspinner Press and anywhere books are sold.

For questions and comments, not restricted to green-eyed hackers or recipes for traditional English food, you can find Jackie Keswick in all the usual places: