Blogtour: Bearly There by Bailey Bradford

Hi! I’m Bailey Bradford, and I’m here to talk about my new release, Bearly There, which is the first book in the City Shifters series. Which I will do, in a roundabout way.

When I first starting writing back in 2009, I didn’t know how much I’d come to love writing about shifters. The idea of trying scared me at first. Yet, less than six months later, I’d completed the first two books in my Southwestern Shifters series, and was head over heels with shifters and writing about them. I actually wrote the first book, Rescued, in the fall of 2009, but it was a mess with a lot of head-hopping and other issues. It took me a while to get that fixed, and after I did…Well, there was no looking back. Some of my shifter series are darker than the others. Most still have some humor in them. I’m one of those people who is always cracking jokes, even, unfortunately, when it’s not appropriate. As someone who lives with an anxiety disorder, I can say and write some odd things. It’s too bad I don’t have an editor to hang around with me all day correcting my foot-in-mouth before it happens in real life. ☺

Bearly There is low angst, higher humor. Bunny Boy and Jagger have a meet…not quite cute, because there’s a lap dance in an office setting, which goes over about as well as you’d think. But it’s still fun, and I hope to make each book in the series as giggle-inducing. I hope what I have found funny, tickles your funny bone as well. Humor is a hard thing to define, or perhaps it’s harder to individualize. You’ve heard a joke that had other people in tears (from laughing, but you never know) while you’ve wondered what the heck was so funny. Well, I’ve had that experience, or I start laughing when I shouldn’t. Humor is subjective to the person experiencing it.


But I hope Bearly There makes everyone who reads it a little happier at least. I’d love to know y’all got a smile or more out of it. 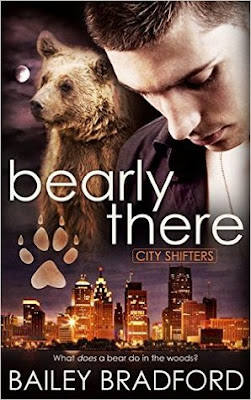 Book one in the City Shifters series


One surly bear and one bunny boy...what could possibly go wrong?

Jagger Osterman is having a bad day. In fact, he’s not the slightest bit impressed with 2015 at all. His job is on the line, and it’s not like he loves being a marketing wunderkind, but he has to do something to pay the bills. If he had his way, he’d just vanish into the mountains and live out his life as the black bear he yearns to shift into. Unfortunately, Jagger doesn’t have the time to let his beast run. He has responsibilities that he can’t walk away from.

Kevin Kelly could tell Jagger a thing or two about bad days, bad years, and just out and out bad luck. He made the mistake of smarting off to a curandera years ago and hasn’t been able to shake the curse she put on him yet. There’s not an area of his life that hasn’t been screwed up in one way or another. As a pronghorn shifter, he’d be okay on his own in the wild. Sure, there’d be predators, but Kevin had come to realize the worst predators were the human kind.

But he can’t shift. He’s been solidly bound to human form since being cursed.

Two men, both trapped in their own ways. They’re about to find out that freedom comes in many forms.

The ringing of his cell phone dragged Jagger’s eyes open. It was Syn calling, and he groaned as he sat up, reaching for the cell at the same time.
“’Morning.” Well okay, it sounded more like mrnghng than anything else, like all his vowels were still asleep, but whatever. It was unfair to expect him to be coherent without coffee.
“Good morning, sunshine!” Syn all but sang.
Jagger flopped onto his back and flung one arm over his eyes. She giggled and went on singing some obnoxiously cheery wake-up song. As soon as she stopped, Jagger found his tongue and got it unstuck from the roof of his mouth. He’d swear little fairies stuffed invisible cotton balls in his mouth while he slept. “Ugh, Syn. You freak. It’s unnatural to be happy in the morning.”
“You are such a grump. I thought it’d be best to start off trying to cheer you up before dumping the bad news on you.”
Jagger buried a sigh. Of course there’d be bad news. “What happened? Is everyone okay?” He wasn’t overly worried that they weren’t since Syn didn’t sound upset.
“They’re fine. Jelly and Max are good.”
Jelly and Max were her cats, aka her babies. Calling them pets would get a guy whacked upside the head. He would know.
“Uncle Sal is fine, too,” Syn continued. “But he almost wasn’t. He stepped through the porch.”
“What?” Jagger sat up and scowled. “We just had the porch rebuilt last year!”
“I know, and if you see that contractor, I hope you smack him with the two by four that gave out on Sal. Do you have any idea how loud a sixty-three-year-old man can scream, and how much he sounds like a three-year-old girl when he does?”
“He’s not hurt?” Jagger got out of bed and started for the bathroom. “Are you sure?” he asked when Syn said Sal was fine.
“Positive. He got scraped up but he shifted and is snoozing in his room. He’ll be fine when he wakes up. It was just scratches.”
That was good, at least. “I’m surprised he didn’t head back out.”
“Uncle Sal said he needed to do some things in the city. I think he has a lady friend he visits for a nooky call.”
“No,” Jagger groaned again. “No, I don’t want to think about Sal and sex. That’s disturbing, Syn.”
Syn snorted. “Please. People have sex. Well, most people have sex. Apparently you and I are the weirdos.”
Jagger felt sad more than anything else at that. Syn should be out and having fun, maybe not out screwing around, but not imprisoned by her own fears.
“Anyway, the porch needs fixing, and I was hoping you could replace the broken board?”
“I’m going to call the contractor I paid to do the job in the first place,” Jagger told her. “He’ll fix it, or else I’ll—”
“Ohhh, spam his Facebook page with complaints?” “No, I’ll—” “Hunt him down and kick his ass? Break his porch? Oh! The flaming bag of poop! I’ve heard stories about that!” “How much coffee have you had this morning?” Jagger asked. “Three cups,” Syn answered. “And a whole bag of chocolate donuts. I am happy.” “Hyper,” he muttered. “I’ll be over in half an hour.” “Okay. Take longer if you need extra time to shake the grumpies.” Jagger grunted and hung up.
Copyright Bailey Bradford 2016

A native Texan, Bailey spends her days spinning stories around in her head, which has contributed to more than one incident of tripping over her own feet. Evenings are reserved for pounding away at the keyboard, as are early morning hours. Sleep? Doesn't happen much. Writing is too much fun, and there are too many characters bouncing about, tapping on Bailey's brain demanding to be let out.

Caffeine and chocolate are permanent fixtures in Bailey's office and are never far from hand at any given time. Removing either of those necessities from Bailey's presence can result in what is known as A Very, Very Scary Bailey and is not advised under any circumstances.


Enter Pride Publishing’s prize draw for your chance to win a free eBook of your choice (not including boxsets or anthologies).

Blurb: Temperatures rise when there are two cooks in Jude’s kitchen... Jude’s drowning in guilt when he can’t save his family business ...