Author Of The Month - TJ Klune - Week One

Welcome to our month-long celebrations for the super-talented

We're kicking off with Bear, Otter and The Kid, better known as BOATK in M/M romance circles, with super-long excerpts, plus a list of Tj's favorite things. And way, way down at the bottom is a chance to win one of his books!

The first book in this series, Bear, Otter and The Kid: 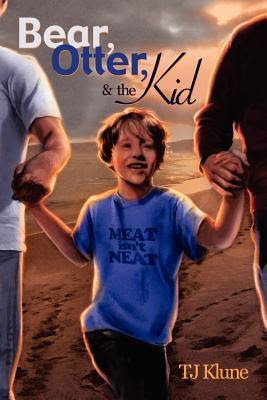 Three years ago, Bear McKenna’s mother took off for parts unknown with her new boyfriend, leaving Bear to raise his six-year-old brother Tyson, aka the Kid. Somehow they’ve muddled through, but since he’s totally devoted to the Kid, Bear isn’t actually doing much living—with a few exceptions, he’s retreated from the world, and he’s mostly okay with that. Until Otter comes home.

Otter is Bear’s best friend’s older brother, and as they’ve done for their whole lives, Bear and Otter crash and collide in ways neither expect. This time, though, there’s nowhere to run from the depth of emotion between them. Bear still believes his place is as the Kid’s guardian, but he can’t help thinking there could be something more for him in the world... something or someone.

Secondly, there is Who We Are: 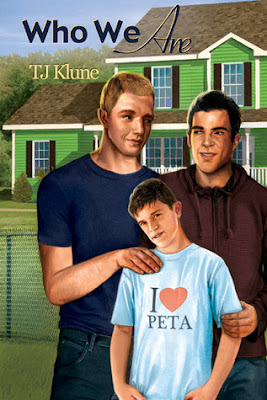 Bear, Otter, and the Kid survived last summer with their hearts and souls intact. They’ve moved into the Green Monstrosity, and Bear is finally able to admit his love for the man who saved him from himself.

But that's not the end of their story. How could it be?

The boys find that life doesn’t stop just because they got their happily ever after. There’s still the custody battle for the Kid. The return of Otter’s parents. A first trip to a gay bar. The Kid goes to therapy, and Mrs. Paquinn decides that Bigfoot is real. Anna and Creed do… well, whatever it is Anna and Creed do. There are newfound jealousies, the return of old enemies, bad poetry, and misanthropic seagulls. And through it all, Bear struggles to understand his mother’s abandonment of him and his brother, only to delve deeper into their shared past. What he finds there will alter their lives forever and help him realize what it'll take to become who they're supposed to be.

We were at war, he and I.
I’d inadvertently fired the opening salvo on the day forever known as the Big Move (It’s About Time). It was not intentional, but I’ve learned that maybe the first shots never really are. Of course it wasn’t intentional; who in their right mind would want to face the wrath of the smartest nine-year-old vegetarian ecoterrorist-in-training on the planet?
Not I. Much greater men than I have fallen to him.
It was one of the last boxes in the apartment, and there were only a few things left to pack. I’d gone into the bedroom to make sure we’d gotten everything, that nothing was left behind. It’d startled me, if only for a moment, to see how empty the room was: divots on the floors showing where bedposts had rested for years. Faint outlines of posters on the walls. A stain in the corner that I just knew wasn’t going to allow me to get the damn deposit back (and I really didn’t want to know what it was; it was a greenish-bluish thing that screamed “bad tenants.” I thought maybe I should at least try to clean it, but it looked too gross, so I just left it alone). I was struck, oddly, by a sense of sadness at the empty space before me. I don’t adapt to change very well, even if it’s a good thing. So much had happened here, so much that had changed everything about our lives, that it seemed important that I stop and at least send up a grateful thank-you to who’d ever take it.
So I was distracted, okay? It wasn’t intentional. I swear.
I noticed something light blue near the closet. A shirt that somehow had gotten missed. I picked it up, rolling my eyes at the MEAT ISN’T NEAT slogan across the front. I don’t know how the hell he’d missed this; it was literally the most favorite thing he owned. Well, that and the random collection of other shirts he started ordering online with my credit card (once he’d learned that all it took was punching in the numbers into the website and he could order whatever he wanted—you’d have thought that Jesus had come back and told him that vegetarians are the next step in human evolution; he’d been that excited.) Every few days a new box would show up at our door, containing shirts with such winners as GIVE ME TOFU OR GIVE ME DEATH or one with Gandhi’s face and his quote underneath: “You can judge a society by the way it treats its animals.” That one had made me feel a little guilty. And way creeped out, because Gandhi’s eyes seemed to follow me everywhere, like he knew, just knew I was thinking about pulled pork.
But it was when that last one had come that I had to draw the line. Imagine, if you will, sitting down for breakfast one randomly bright and sunny morning, and your little brother walks into a room wearing a shirt that says WANT LONGER LASTING SEX? BECOME A VEGETARIAN! Seriously? Come on. Seriously!

And third in this fabulous series, The Art Of Breathing: 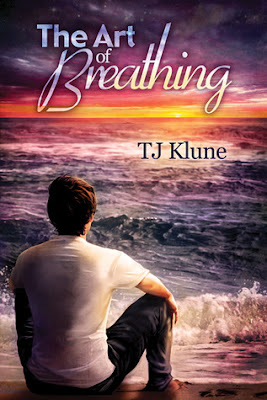 Tyson Thompson graduated high school at sixteen and left the town of Seafare, Oregon, bound for what he assumed would be bigger and better things. He soon found out the real world has teeth, and he returns to the coast with four years of failure, addiction, and a diagnosis of panic disorder trailing behind him. His brother, Bear, and his brother's husband, Otter, believe coming home is exactly what Tyson needs to find himself again. Surrounded by family in the Green Monstrosity, Tyson attempts to put the pieces of his broken life back together.

But shortly after he arrives home, Tyson comes face to face with inevitability in the form of his childhood friend and first love, Dominic Miller, who he hasn't seen since the day he left Seafare. As their paths cross, old wounds reopen, new secrets are revealed, and Tyson discovers there is more to his own story than he was told all those years ago.

In a sea of familiar faces, new friends, and the memories of a mother's devastating choice, Tyson will learn that in order to have any hope for a future, he must fight the ghosts of his past.

Here are a few of my favorite things (and don’t tell me you didn’t sing the song in your head when you read that):

When TJ Klune was eight, he picked up a pen and paper and began to write his first story (which turned out to be his own sweeping epic version of the video game Super Metroid—he didn't think the game ended very well and wanted to offer his own take on it. He never heard back from the video game company, much to his chagrin). Now, two decades later, the cast of characters in his head have only gotten louder, wondering why he has to go to work as a claims examiner for an insurance company during the day when he could just stay home and write.

He dreams about one day standing at Stonehenge, just so he can say he did.


Thanks for joining us today. Come back next week for more about TJ's books and another fun list.