Bookblast: It Was Supposed To Be A Vacation by M. Durango

It Was Supposed To Be A Vacation 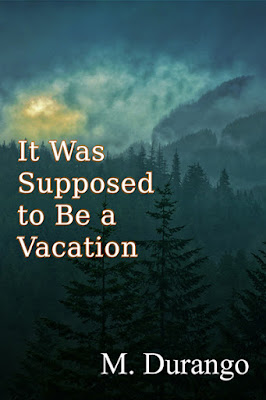 A week alone is just what Todd needs to get his head straight. Before he can light his first campfire, the dead body he stumbles upon sends him running back to civilization and straight to the Park Ranger’s office. Ranger Max has had his eye on Todd for years, but things keep getting in the way: boyfriends, jobs, and now a series of murders in the woods he’s sworn to take care of. Once the press gets involved, Todd receives unwanted attention from his community—and the killer. Together, Todd and Max have to find a way to grow their fledgling relationship while keeping Todd safe before the killer has his way.


Todd sought solace where he always had—in the woods where he’d camped as a kid. He could hear birds in the trees and small animals scurrying through the undergrowth, but other than that uninterested company, he was alone. The spring rains had just tapered off and Todd wanted to take advantage of the outdoors before droves of tourists descended on Edgerton. The shorter days cut into his hiking time, but he would deal with that. He wasn’t sick of his own company yet and could read by lantern light when his thoughts got to be too much.

The ground was littered with dead leaves and other detritus typical of undisturbed nature. If he hadn’t been watching where he was going so carefully—one false step could leave him with a broken leg, and even Todd wasn’t so melodramatic that he wanted to die out here—he might have missed the flannel jacket that blended so well with the forest floor. Todd was about to dismiss it as trash from a previous camper when he realized it was attached to something.

M. Durango ~ Mar to her friends ~ has been writing on and off since her first foray into fanfic at the age of 8. Sometime in 2003, she discovered m/m romance and was hooked. Finally figuring out what she wanted to do with her life at the early age of 34, she quit her corporate job, bought a bunch of writing books, and set out to learn how to create characters, dialog, and actual plots. Mar grew up in New Jersey and has lived in the Pacific Northwest since the mid-90s with her scientist hubby and two insane cats.