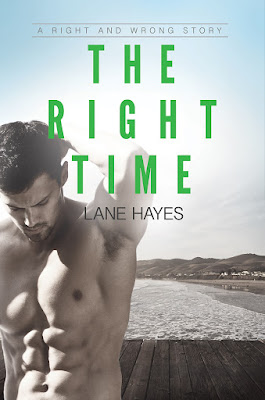 Workaholic Nate Erickson is a successful real estate developer who thrives on long hours and stress. When a Los Angeles project prompts him to relocate to Santa Monica, he welcomes the change of scenery. Nate has always considered romantic entanglements trouble, but his sexy next-door neighbor isn’t easy to ignore. Which makes no sense, because Nate is straight… or so he’s always thought.

Alex Reyes is a retired professional soccer player turned West Hollywood business owner with an insatiable lust for life. He loves his family, friends, and work. But there’s one life challenge left to accomplish: coming out publically. Respect for traditional Latino values has kept him in the closet, but Alex begins to think he and his new neighbor might help one another combat their fears. As Alex and Nate forge a strong friendship, they soon realize facing their personal demons will take more courage than either man bargained. The reward is immeasurable… if the timing is right.


I hadn’t worked out with a professional in years, and it felt foreign to wait for someone else’s direction.
“Any issues with your shoulders or arms? Any injuries I should know about?” he asked, handing me the weights.
“No, I’m good.”
“Great. Start with your palms facing your thighs, lift them both over your chest, then lower the left. Good. And now the right.”
He stood over me diligently, making slight corrections when needed. My supine position gave me an interesting perspective. When I looked up, I noted how his strong brow offset his twinkling eyes. I swallowed uncomfortably and turned my head, only to find myself staring at his crotch. His dark shorts seemed to hint they were covering a generous package.
Holy fuck.
“You doing okay?”
“Uh yeah. Hey, weren’t you going to tell me about your Friday night?” I needed him to talk. I didn’t trust my thoughts anymore, and I was stuck in my current position crazily aware of a man in a way I hadn’t been in over fifteen fucking years. Diversion in any form was welcome.
Alex snorted. “I already told you. I went dancing, and oh yeah, I did get lucky.”
He added the last part with a hearty chuckle, no doubt catching my wide-eyed expression. I hadn’t expected that.
“Oh.”
“You asked.”
“Right.” I did? The strong flash of jealousy took me by surprise, but I pressed on. “Did you go back to the beach to get those girls’ numbers last weekend?”
He looked confused for a second, but a slow cocky grin soon spread across his handsome features as he crouched so his face was close to mine.
“No, I told you they weren’t my type.”
I gulped and watched his eyes lower to my throat. He licked his top lip and reached out to adjust my wrist.
“Lift ’em both at the same time, Nate. That’s it. Push it. Harder.”
I sent up a quick prayer I wasn’t sporting a tent in my shorts. Alex’s voice, touch, and yeah, the unintentional innuendos were making me nuts. And horny. I felt terribly out of my element. I wasn’t sure what we were talking about anymore, but the potent silence made me more uncomfortable than speech. Keep talking, I thought.
“So a dance partner?”
“What? Oh. Yeah, I think so. I can’t remember. It was just one of those things, you know? Sit up. Let’s give your arms a break.”
“Just one of those things?”
“Yeah. One night. No numbers exchanged. No hassle, no fuss.”
I had no words. Literally.


Alex chuckled gleefully as he led the way to a leg machine. He gave instructions and stood back to observe me for a moment.
“It’s not necessarily my favorite kind of sex, but hey….” He shrugged his shoulders with his hands outstretched as if to say “what’s a guy to do?”
I recognized this cue. It was my opportunity to commiserate about the trials and tribulations of being a single man with a healthy sexual appetite. Now was my chance to admit it was nice every once in a while to have sex of the nonsolo variety with someone who knew the score. But I was tongue-tied and equally aware of a completely different undercurrent. One I wasn’t brave enough to explore.
“You can stop having fun at my expense any time.”
Alex squeezed my shoulder and smirked playfully. “You’re easily rattled.”
“How so?”
“You seem like someone who has a place for everything and likes everything in its place. You have a routine, and you don’t appreciate any deviation. I should be flattered you came to the gym with me at the spur of the moment.” He paused, running his tongue over his plump bottom lip. “If you’re not careful, I’m gonna think you like me.”


The air between us crackled. Alex leaned forward so his handsome face was mere inches from mine. His proximity alone seemed to issue a challenge. Daring me to confess I was more than I appeared to be. I doubt he expected any revelations, but his intent was certainly to… how had he put it, rattle me. And damn, it was working.

We had an opportunity to ask Lane some questions. Well, the characters, to be precise...

Hi Lane, thank you for agreeing to this interview.

Thank you for having me here today. The Right Time is Book 3 in the Right and Wrong Stories series. This is Alex and Nate’s story. Those who’ve read The Right Words and The Wrong Man will remember Alex from both stories and Nate from Book 2. I’m very excited about this one. Alex is a fun, vivacious character who’s been in need of a HEA since the beginning. Nate’s a lucky guy (and vice versa)! I’m going to let the guys take over from here. Enjoy!

*Lane hands mike over to Alex and Nate*


Tell us something about your friends.

Alex glances at Nate. “I’ll answer this one. We actually have a great group of mutual friends. My best friend Michael’s boyfriend, Luke, is best friends with Brandon. Bran is the guy who introduced us. Kind of.”

Nate nods. “Right. And Bran is with Jake, who’s a close friend of mine. As far as what we can tell you about them… they’re all great guys and we’re lucky to have their friendship and support. Friends you can count on are never to be taken lightly.”

“My favorite meal… I could say a gigantic burger with cheddar cheese and onion rings, but my mother would roll over in her grave so I’ll keep it Mexican. I love almost all Mexican food, but I especially love chili verde. Favorite dessert… chocolate ice cream. Snack food… fruit, nuts. Foods that are easy to grab while I’m training. Your turn, Professor.”

“I love Mexican food too and I have a soft spot for chili verde.” Nate smiles at Alex. “I don’t eat dessert.”

“I know, I know. Snack food… same as Alex. Fruit, a handful of nuts— really?” Nate smacks Alex’s arm playfully when he snickers. “Next question.”


What activity do you absolutely hate?

“I hate not having an activity. I’m always on the go. It’s torture for me to sit still for long periods.” Alex shivers dramatically

“It’s true. He can’t do it. Even on airplanes, he’s the guy pacing the aisles until the flight attendants ask him to please be seated.” Nate chuckles. “I’m pretty active too, but I’m a little more selective. I love anything in the water. Surfing, paddle boarding, jet skiing. I wouldn’t necessary say I absolutely hate it, but I’ll say fishing.”

“Does that count? If it does, put that down for me too. Boring!”


What other author’s book do you think you’d be good in?

Alex and Nate look at each other for a moment, then burst into laughter. “No idea, but if we got to choose, I’d say a comic book, Super Man or Green Lantern!”

Nate chuckles. “Yes, that would definitely be perfect for you. I think I’d choose a George R.R. Martin book.”


What’s your favorite decade and why?

“Now. This last year has been amazing and I can’t help but feel I’m on the right track… professionally and personally.” Alex takes Nate’s hand and squeezes it tightly. Nate smiles affectionately and nods in agreement.

“I’m with Alex. I think either of us could say music from the 80s was awesome or the 60s was a time of incredible growth and change, but in a strictly personal sense… it feels very liberating to finally feel like you’re in the right place.”

And at The Right Time. (Sorry, I just had to throw that in there! ☺) Thanks guys!

Lane Hayes is finally doing what she loves best. Writing! An avid reader from an early age, Lane has always been drawn to romance novels. She truly believes there is nothing more inspiring than a well-told love story with beautifully written characters. Lane discovered the M/M genre a fews ago and was instantly hooked. Her debut novel, Better Than Good, was a 2013 Rainbow Awards finalist. She loves travel, chocolate, and wine (in no particular order). Lane lives in Southern California with her amazing husband and their very old dog in an almost empty nest.