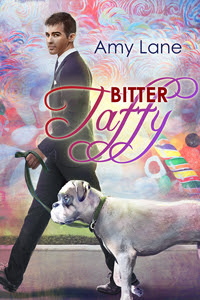 
Rico Gonzalves-Macias didn't expect to fall in love during his internship in New York—and he didn’t expect the boss’s son to out them both and get him fired either. When he returns to Sacramento stunned and heartbroken, he finds his cousin, Adam, and Adam's boyfriend, Finn, haven't just been house-sitting—they've made his once sterile apartment into a home.

When Adam gets him a job interview with the adorable, magnetic, practically perfect Derek Huston, Rico feels especially out of his depth. Derek makes it no secret that he wants Rico, but Rico is just starting to figure out that he’s a beginner at the really important stuff and doesn’t want to jump into anything with both feet.

Derek is a both-feet kind of guy. But he’s also made mistakes of his own and doesn’t want to pressure Rico into anything. Together they work to find a compromise between instant attraction and long-lasting love, and while they’re working, Rico gets a primer in why family isn’t always a bad idea. He needs to believe Derek can be his family before Derek’s formidable patience runs out—because even a practically perfect boyfriend is capable of being hurt.

"Tide of chaos washing ashore on the beach of what the fuck?"


Oh, Amy Lane, you do have a way with words.

Flufftastic Lane stories have a special place in my heart, and I j'adore this series.

I was very glad to visit with Adam and Finn once again. Adam's come a long way, even though he's still vulnerable around the edges. And Finn is ... pure joy, like his big, boisterous, giving family.

Now Adam has not only Finn but Rico. The two cousins have a special bond, which is good, because Rico comes home early, unannounced, and is almost taken down by a rather scary, half-naked Finn wielding a weapon.

I expected this to be Rico and Ezra's story. But this isn't a story about first love.

It's a story about REAL love, the kind that takes you to baseball games and holds your hand in public.


Rico is unprepared for the force that is Derek.


This bitter taffy doesn't last; you only have to eat it once.

I wasn't entirely sold on the family-drama storyline (Rico and Adam's family sucks donkeyballs), but I was glad to see Rico's mamí at least come round.

Derek and Rico's relationship is brightness and sweetness and CANDY, just like the story.

A part of me wanted more bite, a bit more angst. It all came so easily.

But I can't complain too much. This is Amy Lane after all—pure pleasure to read.

I am very satisfied with the ending, especially knowing that Ezra's story is in the works and Candy Heaven magic continues.