Today we welcome Grace R. Duncan for a guest post and info about

In a world that's gone to hell, will you let old fears keep you from the chance at more than just survival? 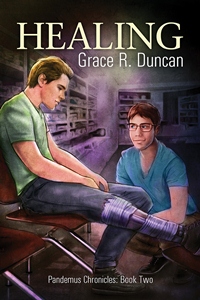 When Duncan stumbles into a pharmacy in search of something to fix his broken leg, he’s surprised to find someone else there. Like the rest of the post-pandemic world, it appeared empty. Instead, he discovers Mark, a former nurse who walked away from his profession after losing too many patients to the virus. Despite swearing he’d never practice medicine again, Mark patches Duncan up over Duncan's protests. He even finds an abandoned house in the tiny town, and they settle in until Duncan heals enough to look out for himself. Much to the chagrin of both, they find themselves caring for each other.
Duncan welcomes it, thrilled at finding someone he can trust. However, he’s well aware of the shadows in Mark’s eyes and understands Mark’s reticence as he learns the story. But as he’s starting to do things for himself again, Duncan realizes he doesn’t want Mark to leave. He’s not sure if can get Mark to let go of his fears so they can stay together and love. But Duncan’s damned sure going to try.


He should have known better. Under normal circumstances, it was a stupid move, but right here, right now, “stupid” didn’t begin to cover it.

Duncan glared at his leg for another moment, then leaned his head back against the wall. He needed to keep moving. It hurt like hell, but he had to keep going. It wasn’t going to get better on its own. The gash needed to be cleaned and bandaged, and even if the break wasn’t bad, it should at least be braced. And it wasn’t like he could call an ambulance. Or even go into an emergency room.

Well, he supposed he could go into an emergency room, if he was in the city. But like a lot of other people, he avoided the cities whenever possible. And when it wasn’t, he stayed as far on the edge as he could. But even there, it was a dangerous risk. As corrupt as the cities were now, the price of anything was higher than most could pay. He’d heard rumors that, in some of the worst cities, people simply got shot if they couldn’t pay what the thugs in power wanted. It was all rumor, but rumor he wasn’t about to ignore.

So he did his damnedest to stay away.

He’d been stupid to jump off the ledge. Even at only a couple of feet higher than he was tall, the risk hadn’t been worth it. He’d have thought, after nearly three years, he’d learned how to be more careful and not take those kinds of risks. It wasn’t the first time he’d fallen and hurt himself—though, thankfully, the last one hadn’t involved a broken bone. Maybe it should have; he might have learned his lesson then.

Duncan steeled himself and pulled to his feet, grimacing when the sharp pain shot up his ankle and through his leg. “Fuck,” he muttered, breathing hard through his nose. When he finally focused past the pain, he looked up and noted the position of the sun, the only real indication he had for the time, and figured he had another good hour or two of light. If he was right about where he was, he wouldn’t need all of it. He tucked the stick he’d found under his arm, grimaced when it dug into the soft flesh, but then leaned on it and hobbled along again.


So, Sandra posted that she had a free spot for a blog visit and I jumped at the chance. Then I realized… I had no idea what to write about. It’s, unfortunately an all-too-common struggle for us, to come up with creative blog posts.

So, I thought I’d keep this one short and sweet. I love dystopian/post-apocalyptic/post-pandemic/whatever books. Love them. I used to watch tons of disaster movies, but truthfully, I more enjoyed thinking about the aftermath and how things would go after it was over.

Unfortunately, despite the number of dystopian books out there, I actually had to go digging to figure out what out of my favorite titles qualifies. I was a little surprised initially, then realized… duh? Of course they are. It’s just been so long since I’ve read them and back when I did (which is more years ago than I’d like to admit to), I don’t remember there actually being anything called dystopian, or even post-apocalyptic. It was usually labeled sci-fi or horror and that was it.

That said, when I sat down to do my list, I realized quickly I couldn’t put them in a particular order. First, because I thoroughly enjoyed all of the books to the point I’ve read them all more than once. Aside from the first I’ll list—which will be a surprise to no one—the rest I can’t really compare. It’s not fair to any of them and they’re all unique in their own way so that, despite the fact that they all fall under this category, it’s almost like comparing apples to oranges.

Now, the first, which is quite obvious and which I’ve mentioned in other places is Stephen King’s The Stand. I’ve made no secret that it influenced my post-pandemic world in Healing and Celebrating You. I even mention it in Healing (Duncan tries to read it).

From here, let me list four more that most here should be familiar with. If not the full stories, the titles themselves: 1984 (George Orwell), The Handmaid’s Tale (Margaret Atwood), The Road (Cormac McCarthy), and The Girl Who Owned a City (O.T. Nelson). That last, I read back when I first discovered novels. I couldn’t even tell you how old I was when I’d read it, but in all these years, I’ve never forgotten it. It’s short, it’s YA, but it’s a fantastic read. The other three were much more obvious (now that I took a moment to consider it).

A few years ago, when I discovered the world of M/M fiction, I dove head first and haven’t surfaced much since (with the notable exceptions of the Rick Riordan and John Flanagan YA books). My love for dystopian hasn’t abated, but those are much more rare in our genre. I do have a pretty large TBR pile, some of them dystopian. But I’ve managed to snag and read quite a few already. Out of those, I have a few clear favorites. In no particular order:

Strain by Amelia C. Gormley. Her world just grabbed me hard and hasn’t let go. I’ve read it twice. She has two more coming out in this world and despite one being bittersweet, I am looking forward to them both (and that’s saying something as I hate bittersweet).

Marked Yours by Elizabeth Noble. Really, all of the Sentries novels. I fell in love with Todd and Nick and the world is an intriguing place to be. I am anxiously awaiting the last in the series. So much so I volunteered to beta read for her. *laughs*

The Arroyo by M. Caspian. I discovered this while digging through the M/M Romance group reads on Goodreads. Fantastic world, just dark enough to make you feel it while not overshadowing the plot.

Collared by Kari Gregg. Maybe not dystopian per se, but the world has taken a screwed-up twist and the end result is… I want more. I do hope she gets around to the sequel she’s mentioned.

Anchored by Rachel Haimowitz. I have to approach Rachel’s books carefully. She has the ability to rip my heart out and trample it while it’s still beating and I’m watching. Anchored again isn’t exactly the same kind of dystopian, but I still feel it belongs and I was glad I took the chance and read it.

I could go on. There are tons of lovely books out there, many of which deserve their own blog posts. If you love dystopian or any variation thereof, take a gander at these. They’re great stories.

Do you have a favorite dystopian/post-apocalyptic story? Let me know! Each answer qualifies you for a chance at one of my previously-published titles!

Thanks again to Sandra for the chance to stop by!

Grace Duncan grew up with a wild imagination. She told stories from an early age - many of which got her into trouble. Eventually, she learned to channel that imagination into less troublesome areas, including fanfiction, which is what has led her to writing male/male erotica.

A gypsy in her own right, Grace has lived all over the United States. She has currently set up camp in East Texas with her husband and children - both the human and furry kind.

Grace will pick a winner from all comments left on this post!