Welcome to our GRAND FINALE celebrations for the awesomely amazing

For our final post, we've got you covered with info about Con's upcoming self-published novel, TRUE BRIT, a great Q&A session where Con divulges some of her writing secrets, and one more chance to win an e-copy of any book from Con's backlist.


First up, TRUE BRIT! While we don't have the cover yet (coming soon, we promise), we do have a blurb, and a special excerpt or two for you. 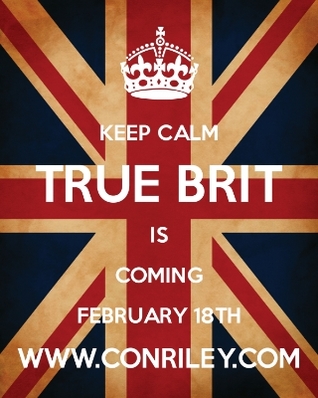 Winning the United Kingdom’s favorite singing contest is a challenge for half-Afghani Pasha Trueman. He doesn’t have the best voice, but success would be life-changing. His strategy is simple—he’ll make the British public love him.

Ex-soldier Ed Britten has a different agenda. Winning means he’ll keep a promise made after a deadly Afghan ambush. His voice is his weapon, but he leaves his heart unguarded.

Ed and Pasha’s discovery that the contest isn’t a fair fight calls for creative tactics. Staging a fake love story could bring victory, only there’s more at stake than the prestigious first prize. If winning means surrendering each other, they could both end up losing.


Pasha had nothing to lose. He pushed a little harder. “’Cause from where I’m sitting, it kinda looks like you were about to kiss me.” He ignored Ed’s subvocal denial and scrolled to another image someone had enhanced with a romantic, soft-focus filter. “Fuck, it looks like you want to do a whole lot more than kiss me. I was there when it was taken, but if this photo makes me wonder whether you’ve got feelings for me, how do you think it looks to the public?”

“Someone’s cropped this one. You can’t even tell where we are. All that anyone will have to work on is exactly what we’re showing right here. Jesus, Ed, you’re looking at me like I’m the love of your life. I’ll marry the next person who looks at me the same way for real. Or at least tie them to my bed for a very long time.”

All Ed had to offer was a small sound that caught in his throat.

Pasha dragged a finger down the screen of his phone so that its content refreshed. “Tell me you understand what this means.”

The number of times the photo had been shared had doubled in only minutes.

“Every single one of those shares links us to possible voters. And this is only on one social media platform. If a fraction of fans share the photo in other places as well…. It’s—” He struggled to think of clearer ways to describe the potential they had if they worked the fake relationship angle just right. “—it’s….”

Pasha nodded. The numbers increased again and again, as did the hashtags the fans attached to the photo. Some abbreviated their names and merged them together. “It’s not cheating,” he insisted. “We won’t be doing any different than the boy band every time they flirt with Anya. It’s giving the fans what they want, that’s all.”

He nudged Ed with his shoulder. “Is love ever a bad thing, even if it’s only in their imaginations?”

“Wait.” Pasha turned to Ed again so fast he ended up straddling one of his legs. He spoke directly into Ed’s ear. “Do you at least want to try to stay in the competition?”

Ed nodded. Of course he did. It was the only chance he’d ever get to make up for the worst mistake of his life.

Pasha squeezed his wrist, his fingertips digging between tendons before rubbing as if in apology where they’d grasped too tightly. “And you don’t care what we’ll need to do to make that happen?”

“Are you likely to shoot me?”

Pasha frowned before slowly smiling. From this close, the change in his expression was like sunrise over the desert, warmth after a cold night, light after deep purple velvet darkness cloaking hidden danger.

Well? Don't those make you super excited about the book??

A Q&A With Con Riley:

If you had asked this question a few years ago, I would have said my career inspired my writing. It’s been a privilege, and heartbreaking sometimes, to witness human resilience firsthand, and that used to drive my pen across the page.

Lately, my writing has been fueled by friendship. I was overwhelmed with work last year, and that severely cut down my writing time. I couldn’t commit to a novel, so I ground to a complete halt and cited ‘no time’ as my excuse. My writing group refused to believe me. They didn’t just encourage me, they truly enabled me, and their support added some elements of humor that I think comes through in my upcoming release, True Brit.

I love them, and I’m grateful, and this process has been a huge life lesson that we all need other people.

I’m a simple soul. I open a word document, and then I start typing. I stop when I get to the end. That’s pretty much it.

Occasionally, I try different strategies, like Scrivener software, but it’s more a novelty than a necessity for me. For True Brit I did create a sticky note for each chapter that sat on my desktop as a reminder, and I felt quite accomplished for planning that far ahead! 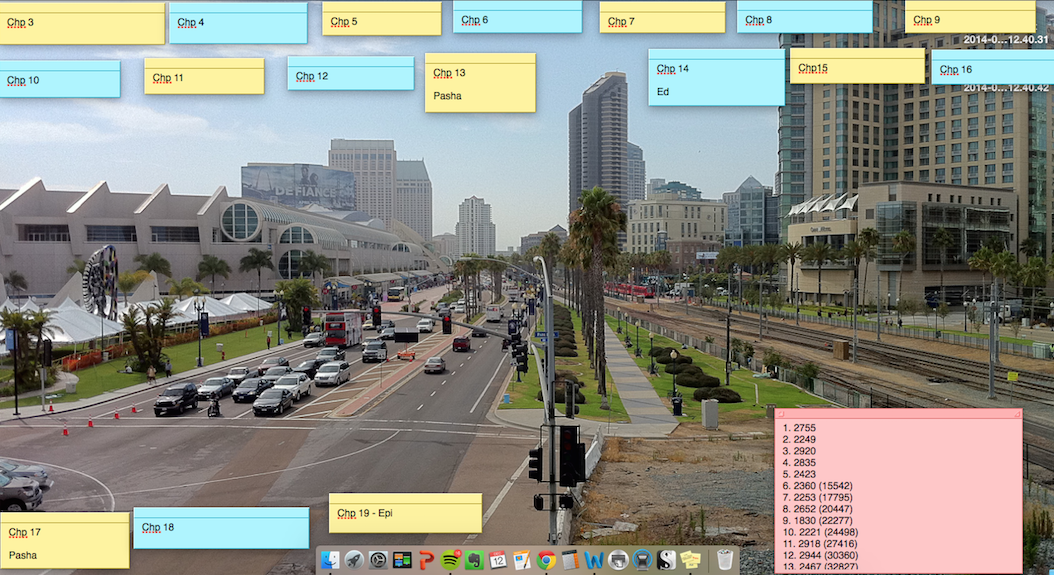 I appreciate that my write-until-it’s-done method is not for everyone, but I’ve zero trouble holding stories in my head, even when non-linear, so I’ve come to trust my process.

One app I do like is called Evernote. It’s a handy place to write down story ideas as they come to me. I think of far more stories than I have time to write, so it’s a very useful resource.

I couldn’t choose a favourite character, but I can definitely state that kindness is my favourite characteristic. That’s why I’m so fond of Peter from Saving Sean, and of Marco from After Ben and Aiden’s Luck. The gruff and often unacknowledged kindness of Coop Cooper in my novel Salvage is very special to me, as is Alec’s kindness to Jamie in Salvage’s companion novel, Recovery.

Pasha, in True Brit, is another character who has a core of kindness that his story spotlights.

But, if I had to pick one character above all others as a constant companion, I’d say sorry to all the others, but I’d spend some more time with Ben.

I’m struggling to answer this question! I’ll tell you a story instead.

I’ve worked on my stories with my best friend/writing partner for years. We’ve hashed out numerous plots, and edited hundreds of thousands of words for each other, but over time we’ve both run out of character names. Choosing names can suck up huge amounts of time, so at some point we both started using the names Gerry or Carl as placeholders. Often, these characters had less than positive attributes!

Most of the time, I would change these names at the end of a project — like Vik in Saving Sean (who was Carl for a while). But sometimes those placeholder names stick. There’s a reason Jamie’s surname was Carlson in Salvage, but the bad guy in True Brit… Well I’ll let you guess what he’s called. 

Goodness, these are tough questions! I’ve written ten novel-length stories, and there’s no doubt that I’ve learned lessons from each, but I’m not sure I’d want to change anything other than the odd typo.

Perhaps one approach is to compare books to friendships. Would it be easier to spend time with a sports-mad friend if they would only shut up about hockey for a minute…? Perhaps it would, but you love their loyalty and enthusiasm—it’s why you call them whenever you feel low.

And what about that friend who constantly fixates on losing weight? Wouldn’t it make more sense for him to stop cooking such amazing meals for his family and friends…? Maybe it would, but spending time with him nourishes your soul.

I feel the same way about my books. I hope the flaws of their characters make them very human.


6. What's next for you? What amazing book are you working on? When can we expect the next Con Riley novel that'll knock our socks off?

Coming soon is my next novel, True Brit, which will release on February 18th:

I’m excited about this book for so many reasons.

Firstly, it’s a gorgeous romance. Ed and Pasha have every reason for conflict. They’re competing for the same prize, and they have nothing in common apart from that aim until they have to push past their assumptions. Their journey is full of so many heart-warming moments that I can’t wait to share it!

Secondly, it’s the first book I’ve written set in Britain, and I’ve loved weaving words around settings I can see from my window in the southwest of England, as well as well-known locations like London. I usually enjoy the challenge of writing American-set stories, but the research is time consuming. A British book was my writing group’s genius solution to my ‘no-time’ excuse.

Thirdly, the TV news is currently so full of stories about communities divided by race or religion that I’ve had moments where I haven’t recognised my own nation. I got tangled in unpicking what defines a True Brit — is it as simple as creed or color, or are there more complex definitions?

Ed and Pasha’s love story was my chance to unravel that knot. I hope you all enjoy their journey.

It’s been such a simple pleasure to write for friends. My writing group made this book happen. It simply wouldn’t exist without their cheerleading, and I’m so grateful that my best friend along with Jay Northcote, Annabelle Jacobs, N.R. Walker, Teegan Loy, Posy Roberts, and T.M. Franklin wouldn’t listen to my ‘too busy’ excuses.

Where to find Con Riley:


Thanks for joining us today. We hope that you enjoyed the posts about Con Riley, and hope to see you again next month. Until then, happy reading!!