Today we welcome Rory Ni Coileain and the series


First up, Hard As Stone 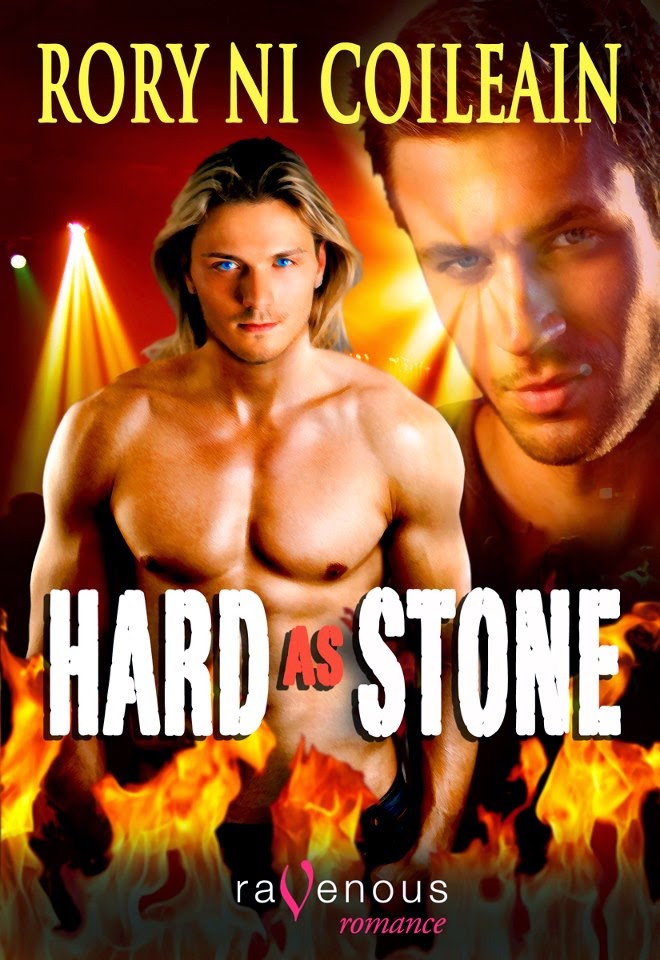 Tiernan Guaire is a Fae in exile. Forced from the Realm into the human world for the unimaginable crime of a brother’s murder, he lives by a century-old vow, to trust no one, and never to allow himself to love or be loved.
Kevin Almstead has just lost his future, to a vote of the partners at his law firm. Trying to escape for an evening, he ventures into Purgatory, the hottest all-male nightclub in Washington, D.C., where he allows himself to be seduced by a stranger with long blond hair and ice-blue eyes.
Drawn into a Soulshare bond with his intended one-night stand, Tiernan soon learns that the most ancient and evil enemy of the Fae still walks the human world, and it will stop at nothing – certainly not Kevin Almstead – to possess the magick of a Noble Fae.


Tiernan stirred, muttered under his breath, the first signs of distress he’d shown since falling asleep. Passing out. Whatever. Kevin sighed, resting a hand lightly on the blond’s smooth chest; in short order, he found himself running his fingertips lightly over his lover’s chest, tracing the lines of the muscles, and then down, a fingertip traveling along the intricate tattoo over his hip. Tiernan wasn’t buff, not like some men were and Kevin himself tried to be. Lean, hard-bodied, almost impossibly fit. And with that long, unruly blond hair, and his crystalline blue eyes, Tiernan would turn heads in rooms full of men or women. And no doubt had.

The Fae rolled onto his side, away from Kevin; chuckling softly, Kevin settled himself behind his lover, glancing over the shoulder in front of him at the bedside clock. He could still get almost three hours of sleep if he was lucky. He wrapped an arm around Tiernan, nuzzled into the curve where neck met shoulder, breathed in the scent of wild hair and sated male body and honey, and closed his eyes. So this is what magic smells like.

Second in the line-up, Gale Force 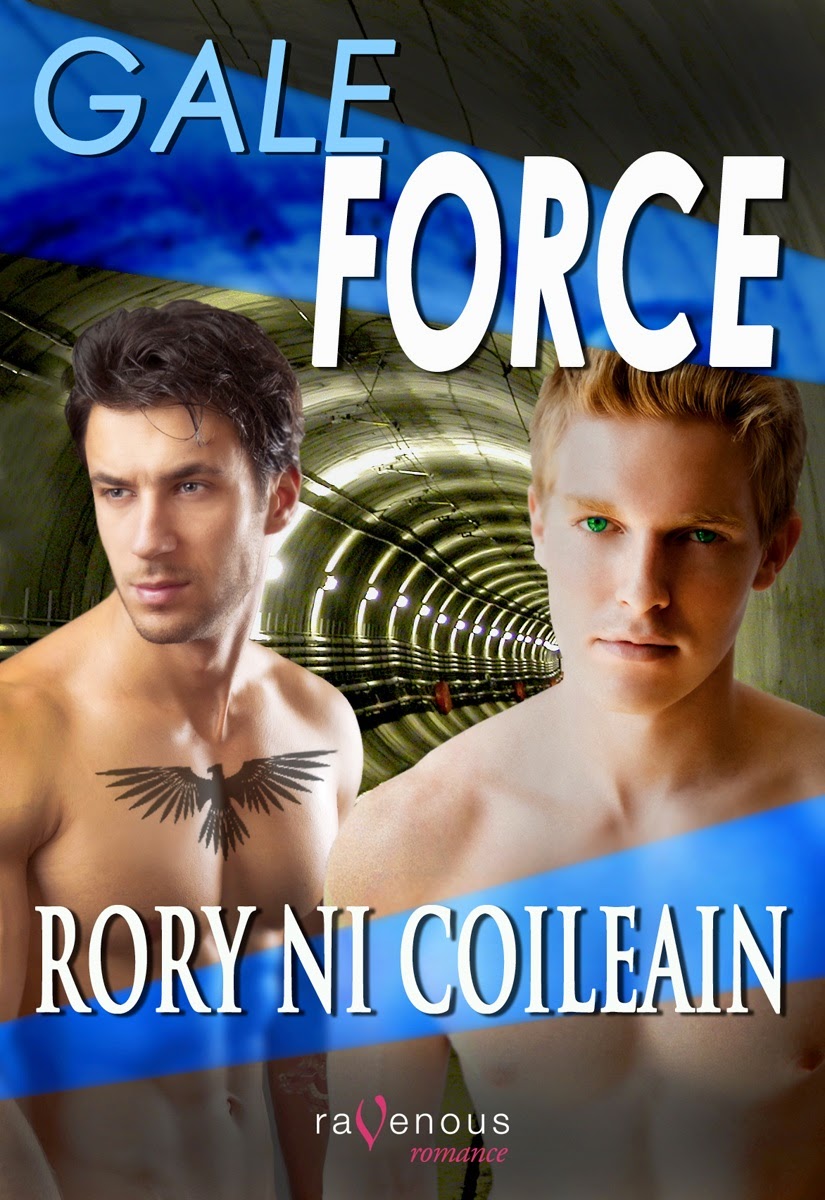 Conall Dary is the most powerful mage born to the Fae race since the Realm was parted from the human world, over two thousand years ago. But that very power condemns him to a lifetime of celibacy, because sex calls to power, and he has power enough to drain a world. When he refuses to use his talents for a Noble lady’s petty revenge, he finds himself shanghaied to the human world, his soul torn in half and his magick blocked.

Josh LaFontaine is the beautifully inked owner of Raging Art-On, a Washington, D.C. tattoo and piercing parlor. While taking part in New York City’s Pride march with a former lover’s dance company, his world changes forever when the man of his dreams materializes out of nowhere at his feet. Josh’s sensual and loving touch, the first Conall has ever known, may be enough to give him back the magick he’s lost. But before they can complete their Soulshare, a terrible accident leaves Conall bodiless, lost, and invisible, to everyone except – maybe – the human with whom he shares a soul. But Josh will need to find him before the ancient evil of the Marfach does or everything they have – and more – will be lost.

The sense of relief as he got out of the taxi was like nothing he’d ever felt before, and even knowing most of it wasn’t his own didn’t make it any less overwhelming. Only the presence of the foot traffic in and out of Purgatory kept him from falling to his knees in gratitude, maybe doing some pavement-kissing.

Well, that and a sense of haste only slightly less urgent than a cattle prod. He fumbled the keys off the hook at his belt and unlocked the deadbolt, then keyed in the combination on the touchpad, wincing as the tiny crystalline tones tried to pierce his eardrums.

Are you sure you can do this, lanan? There might be another way. Just let me think, now that I can.

Josh shook his head. Letting himself into the small client lounge in the front, he locked the door behind himself and made straight for the tattoo studio. “No time. Every minute you’re disembodied makes it less likely you’ll ever get back, you said so yourself. And me…” He paused, his hand on the doorknob of his studio. “I’m not sure how much longer I can stand this.” 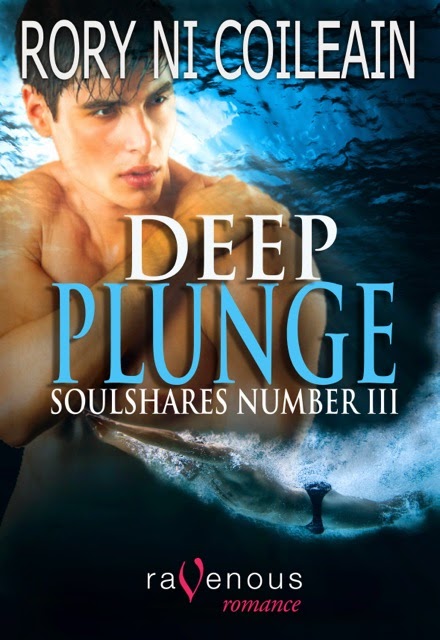 For the last six hundred years or so, the only things reminding Lochlann Doran he’s a Fae have been his faceted aquamarine eyes and the fact that he can’t die. He’s been a wanderer for so long in the human world – over two thousand years – that he’s lost his magick, including the gift of healing that goes along with being a Fae of the Demesne of Water. Finding his SoulShare might get it back for him. But it might kill him, too.

Garrett Templar has been living on borrowed time, in a sense, since he was eighteen, when one of the johns he entertained to pay the bills while he danced at Purgatory infected him with HIV. It was always supposed to be a “manageable” disease, though, at least until a cure was found. Except he’s just found out that the virus in his system has inexplicably mutated into full-blown AIDS, and no known drug cocktail can even slow it down.

And when Lochlann and Garrett find each other at last, on Purgatory’s dance floor, the only thing as urgent as their need for one another is the hunger of an ancient evil to do whatever is necessary to possess Lochlann’s magick…

Shit. His grip tightened on the strap of his bag, ready to swing it -- or ditch it, if it looked like that would help him escape . And for one sick, sweaty, gut-wrenching moment, he was ten years old again, hearing the kids closing in behind him, knowing there was no way in hell he was going to get away without another split lip, ruined shirt, blackened eye. Almost hearing his mother’s voice again. Garrett Lee Templar, I swear, you find more trouble than any ten other boys ever dreamed of. Do you think I can just make new clothes appear out of thin air?

He recognized that voice from somewhere. Slowly, he turned. And stared up into eyes that gleamed blue even in the crappy light from the streetlight on the corner.

“Lochlann?” He hadn’t had to rent his ass out for a while now, but the idea of a john following him home from the club still made his skin crawl. Yet there was something about those eyes, something different.

No. Fuck that shit. You get hurt the worst when you let yourself hope.

And fourth in the series, Firestorm 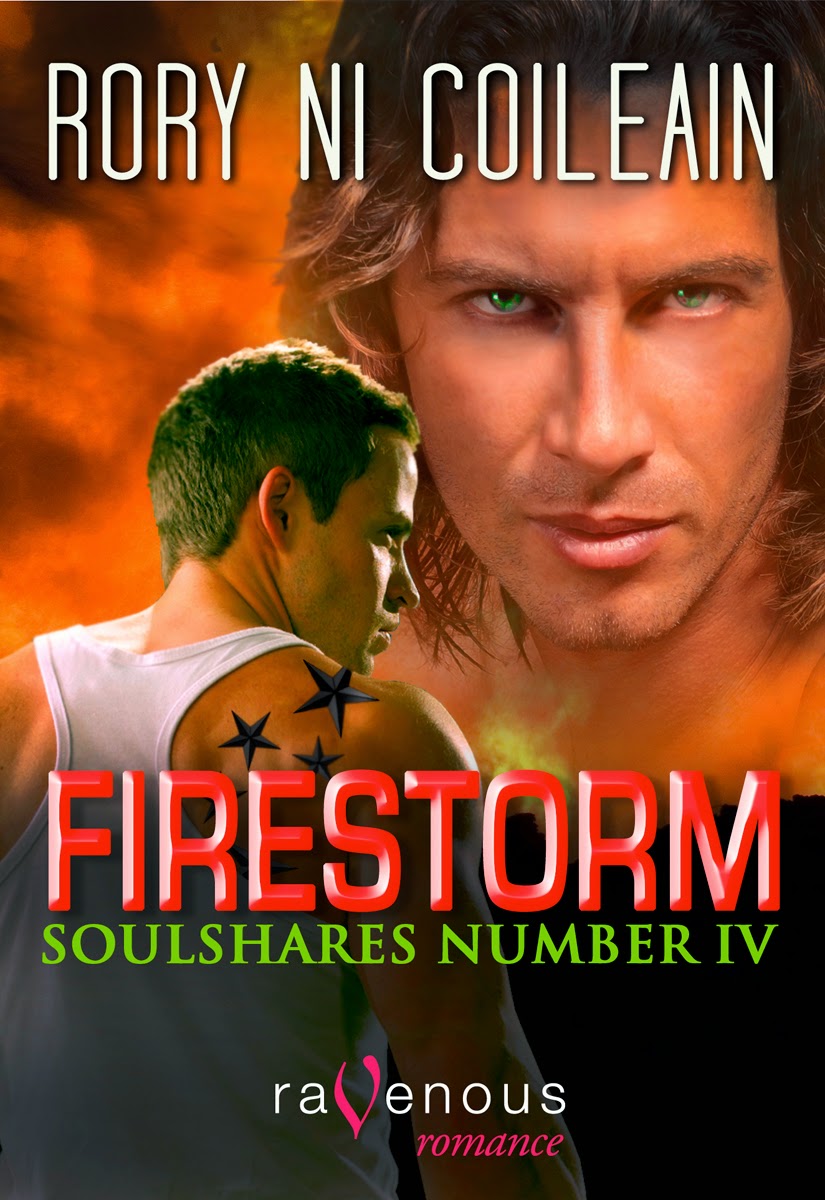 Rian Sheridan is a foundling, a Northern Irish Catholic corner boy whose world was destroyed in fire, and reborn the same way, beside an Orangemen’s bonfire last July the Twelfth. A consuming, dimly-remembered pain in his past calls to him, taunting him, daring him to find it and lose himself to it in the S&M underground of Belfast.

Cuinn an Dearmad is the last surviving Fae Loremaster, and he’s just seen the beginning of the death of the Realm, the haven of the Fae race. The only hope of stopping it starts with him finding the Prince Royal of Fire he stole from the cradle, and lost in the human world, many years ago. He has a few guesses about where that hope ends, and he doesn’t like any of them.

Rian and Cuinn are an impossible pairing, two SoulShared Fae. Any two Fae will strike sparks, but these two Fae are a conflagration. Unable to stand one another, yet drawn into an escalating series of sexual collisions, their passion will either save a world or destroy it.

He gave up on trying to sleep, rolling onto his back and lying sprawled out in the great bed fit for a king. Or a Prince. Shite. He didn’t want to be a fecking Royal. Whatever that meant. But if there was one thing he could say he’d learned in life, it was that what he wanted had fuck all to do with what happened to him.

Though ever since the Twalf, last summer, there was one thing he nearly always got, when he wanted it. The thrill. They’d thought to break him that night, and perhaps they had, but after the breaking he’d been made anew. Into a man who craved what the bastards sought to shame him with, and who used them, in the end, more cruelly than they had used him. After all, he could use them, and others like them, any time he liked.

Rory Ni Coileain majored in creative writing, back when Respectable Colleges didn't offer such a major, so she designed it herself - being careful to ensure that she never had to take a class before nine in the morning or take a Hemingway survey course. She graduated Phi Beta Kappa at the age of nineteen, sent off her first short story to an anthology being assembled by an author she idolized, got shot down in flames, and found other things to do, such as nightclub singing, for the next thirty years or so, until her stories started whispering to her. Now she's a lawyer, a legal editor, a sopraltenor in her church choir, the mother of a budding video game designer, and amanuensis to a host of fantastic creatures who are all anxious to tell their stories, and sometimes even wait their turns.