Today we welcome Marie Sexton and her latest book 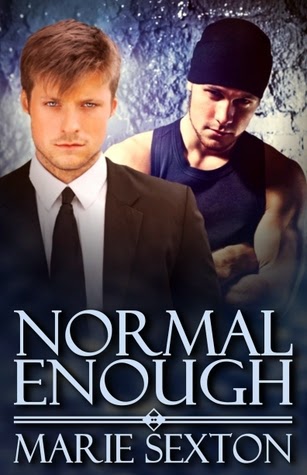 When Brandon Kenner shows up at Kasey Ralston’s garage with a 1970 Chevelle SS 454, Kasey is smitten by both the man and his car. Between what Kasey considers a shameful fetish and his long estrangement from his family, Kasey finds it easiest to be alone, even distancing himself from his coworkers. But Brandon doesn’t think Kasey’s fetish is weird. In fact, he likes it.

Kasey doesn’t know how to resist a man as charming as Brandon, and he’s more than willing to be seduced. But what are Brandon’s long-term intentions? Kasey is afraid of hoping for too much, but equally afraid that when all is said and done, Brandon will leave, and Kasey will be left alone once again.

You clean up nice,” Brandon said when he saw him. “Not that I ever doubted it.”

Kasey blushed, flattered, but also embarrassed for being so obvious. He stood staring at his work boots. He’d waited all morning for this moment, and now he couldn’t wait for it to end. He felt foolish, not so much for the dirty FaceTime session the night before as for how much he’d prattled on afterward.

It took some effort, but he forced himself to do it. Brandon leaned against the fender of the GTO, dressed today in jeans and a golf shirt with a light jacket over it. The sun shone off his golden hair. He was smiling, as usual, his expression gentle.

“You have no idea how much I’d love to kiss you right now. Will you let me?”

Kasey was sure his heart stopped beating for a moment before it slammed into overdrive. He licked his lips, anticipating how it would feel and the way Brandon would taste. But voices behind him drew his attention. It was the Wrench Wars crew, testing their equipment and getting ready for the day.

This time, Kasey’s disappointment was barely tempered with relief. He’d wanted that kiss. But not in front of a television crew that could broadcast it nationwide. It wasn’t even so much he wanted to stay in the closet as that he wanted the first time Brandon kissed him to be private. Special.

He turned back to Brandon, smiling a bit despite himself. “Another time?” It was all he could do to push the question past his throat, and it came out quiet, but he was rewarded with one of Brandon’s biggest smiles.

Kasey felt as if his insides were expanding. Glowing. Warm and fuzzy. Yes, he’d heard that phrase before, but he was pretty sure this was the first time he’d experienced it.

“Let me take you out tonight.”

Once again, it took only a few words for his warm fuzzies to turn into near terror. “Out?”

“Yes, out. On a date. We could have dinner. Maybe go to a movie if you like.”

Brandon sighed in aggravation. He pushed away from the fender, bringing him marginally closer to Kasey. “You keep saying that, but I have no idea what it means. You can do anything you want. For some reason, you’re choosing to say no.”

“I’m sorry. It’s just…” Kasey stammered for an explanation, “I’m not good at this.”

“At what, Kasey? At having dinner with me?”

A light breeze blew Brandon’s hair across his forehead. Cars sped past them on the other side of the sidewalk. Here, in the wide open space of the parking lot, Kasey felt cornered. His frustration at his inadequacy was almost enough to raise a lump in his throat. It made him angry—at himself, at his father and his brothers, at the whole world—but it also made him bolder than usual.

“I’m not good with people, all right? Talking and socializing. That kind of thing. I always make a fool of myself.”

Brandon nodded, not in agreement, but in understanding. “I see. Well, given what you told me about him, I don’t think I trust his judgment. I’d like to see for myself. And I refuse to accept ‘I can’t’ as an excuse.”

“Kasey.” Brandon reached out, as if to take his hand, but stopped short. He put his hand on Kasey’s shoulder instead. “Be honest with me, okay? Do you want me to leave you alone? Because if you’re not interested—if you truly have no desire to see me again—I’ll lay off. But if it’s a matter of getting over your shyness, I intend to stick it out.”

The last thing in the world he wanted was for Brandon to go away. But nobody had ever pursued him so aggressively before. He had no idea how to deal with it, and it was hard to explain his hesitancy. “I don’t want you to leave me alone. But I can’t figure out why, of all the guys in the world, you seem to have chosen me.”

Kasey ducked his head, blushing furiously, but smiling despite himself. Nobody had ever said so many nice things about him. Not since his mom had died, at any rate. “Uhhh…no. That’s enough.”

Kasey made himself look up and face this man who seemed so intent on seducing him. It was surreal. Brandon’s hand was still on his shoulder, and Kasey longed to lean into that touch. To press for something more.

“Now,” Brandon said gently, “what time do you get off work?”

“I can pick you up here at six-fifteen.”

“No.” He noted Brandon’s mounting frustration and hastened to add, “I’m not saying no to the date, but picking me up here isn’t good. I’ll be covered in grease and transmission fluid. Let me go home and shower first.”

Brandon relaxed again, seeing the battle was finally won. He let Kasey go and leaned back against the fender of the GTO. “Can I pick you up at your house?”

Kasey thought about his trailer. He hated to admit he was ashamed of it, but he didn’t want Brandon to see it. “How about if I meet you?”

“Do you promise you’ll come? That you won’t stand me up?”

In truth, the thought hadn’t even crossed Kasey’s mind. That in and of itself was significant. “I promise.”

And so at seven o’clock, freshly showered and wearing his nicest clothes—not counting the suit he’d bought for his father’s funeral two years earlier—he drove downtown to meet Brandon.

Brandon had chosen the restaurant. It was a place Kasey had never been to, but Brandon had promised it would be quiet. Now he was fully committed to the date, Kasey was excited. The warm fuzzies from earlier in the morning mixed with the wild butterflies in his stomach, leaving him anxious and borderline nauseated. He wondered if he’d even be able to eat. The wind had kicked up and turned cold. Kasey pulled his jacket tighter around him when he left the warmth of his car. The air was bitter against his face. Brandon waited for him outside the restaurant. Kasey could tell by his relieved smile that he’d still halfway expected Kasey to stand him up.

Kasey blushed, but found he couldn’t stop smiling. He worried his cheeks might burst from the force of it. He probably looked ridiculous, but he didn’t care. “Me too.”

Brandon took his hand and drew him close, causing Kasey’s heart to speed into overdrive. He cupped his other hand behind Kasey’s neck. “I’m not waiting another minute for that kiss.”

Kasey has a car fetish. He really, really loves them. Not all cars, of course. Just the really cool ones, like that 1970 Chevelle SS 454 that shows up at the car shop where Kasey works, handsome owner included.

No, Kasey doesn't want to have sex with the car. But it sure turns him on, so much so that he's springing a boner while talking to the car's owner.

Marie Sexton deftly delivers a character study of a lonely man, feeling shamed by his fetish, and estranged from his family, too afraid to even reach out to his co-workers to make friends.

But that Chevelle, and the subsequent muscle cars Brandon brings by to encourage Kasey's interest, as well as Brandon's easy acceptance of Kasey's fetish, gives Kasey the push that he needed. He begins thinking about his life, and what turns him on, and that maybe if someone accepts it for what it is, he doesn't have to be ashamed. And perhaps it's even okay to accept that invitation for beers after work, and perhaps it's even a good idea to listen to that message idling on his answering machine.

Kasey grows in realistic ways by the end of the book, from a closed off loner to someone who questions himself and his motives.

Perhaps due to the length of this novella, it smacked a wee bit of instalove, but I liked the happy-for-now, and I even liked that Kasey questioned Brandon's intentions. It's a bit fluffy, for sure, but it was just the thing I wanted at the time. I thought Kasey was cute and adorable in his hesitation and fumblings, and I really liked the fetish being explored here.

Check it out, will ya? It was a great way to spend a couple of hours, curled up in my favorite reading chair.

** I received a free copy of this book from the author as part of her blog tour. A positive review was not promised in return. **

Marie Sexton lives in Colorado. She’s a fan of just about anything that involves muscular young men piling on top of each other. In particular, she loves the Denver Broncos and enjoys going to the games with her husband. Her imaginary friends often tag along. Marie has one daughter, two cats, and one dog, all of whom seem bent on destroying what remains of her sanity. She loves them anyway.


Thanks for stopping by. Until next time, happy reading!!