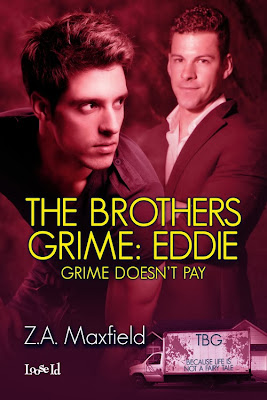 Eddie Vasquez is hot for his niece Lucy’s third grade teacher, B. Andrew (call me Andrew) Daley. Eddie can’t wait to take Andrew dancing to show him his moves. The only problem is, Andrew keeps talking about books Eddie hasn’t read, that he can’t read — at least not in the usual way — because Eddie’s dyslexic.
When the two men find Eddie’s favorite teacher, Mrs. Henderson, wandering the school grounds confused and smelling of human decomposition, they come together to help her. Eddie’s fiercely loyal, and this is the teacher who uncovered Eddie’s learning disability and helped him regain his self-esteem. He’ll do anything, even take on a massive cleaning job pro bono to pay Mrs. Henderson back for the support she’s given him.
Andrew and Eddie come from different worlds, Eddie can’t read, Andrew can’t dance. Andrew’s father is a horrible snob and if all Eddie’s secrets are laid bare, he’ll have plenty to feel superior about. But Eddie and Andrew have taken on a massive project together, and their growing attraction can’t be denied. They learn the trick to forming a lasting partnership in dance and in life might be finding a partner whose weaknesses you can live with and whose strengths make you look good, in Grime Doesn’t Pay.

Wow. This was superb, with realistic characters that were fully fleshed out, and a profound message that permeated the book from pretty much start to finish.

“Because life is not a fairy tale” is The Brothers Grime slogan. Yet, this novel delivers a romance and a story that is as close to a fairy tale as possible, while still firmly planted in realistic settings.

Eddie Vasquez, uncle, brother, son, has been hiding this dyslexia for nearly all his life. He knows his limitations, works around them with what technology offers, but hates the fact that he struggles to read. Oh, and he's also head over heels in lust, possibly love, with his niece Lucy's teacher, B. Andrew Daley.

I knew I was in for a treat when the book started out with Eddie preening in front of the mirror to make sure he looked his very best when dropping off Lucy at school, because Mr. Daley (he who hands out Teacher's Pet pencils to his favorite pupils) might be there.

I was giggling and smiling when both Eddie and Andrew dance around each other, neither man quite confident enough to ask the other out.

Ms. Maxfield created two extraordinarily ordinary characters, both so perfectly imperfect, and made this book about so much more than just the simple romance between two men who on the outside may appear very different, but who fit together so beautifully. They are both flawed, and where Eddie yields with kindness and compassion, Andrew tends to push with anger and a bit of righteousness, which leads to some drama between them. Slammed doors and angry words might follow, but both learn to communicate and really open up to each other, despite fears and despite thinking they're not good enough.

There are a couple of profound messages inside this book, primarily the one about appearances being deceiving (hunky Eddie might seem like he would be a top), and how opening oneself up to someone else can have great rewards. Then there's the message of self-acceptance, which is the most profound of them all and something both Eddie and Andrew have to learn.

“You want to fix him instead of loving him for who he is. Instead of trusting him to fix himself,” Eddie said, breathing hard.


Add to this the issue of Andrew's father being a hoarder, and Andrew's fears of that being a genetic affliction, plus the old teacher who is diagnosed with Alzheimer's when she shows up at school for classes after her husband dies, and this book could have veered into too much drama. That it didn't is a credit to Ms. Maxfield, who deftly weaves together a coherent plot from all these issues in way that flows rapidly, yet never misses a moment to make a poignant observation or a strong point.

And through the whole book, the point of family is being driven home again and again, with a culmination of showing a family working together to help each other when Eddie's family shows up to help Andrew's father with cleaning up his house.

The sexy times – holy hot boysecks, Batman. I felt like an intruder, to be honest, and had tears in my eyes when big, hulking Eddie figures out that he needs Andrew's dominance in the bedroom and lets the smaller man lead. There is a shit-ton of emotion in every scene, and this is what pushed this novel above four stars. What's also worth mentioning is that the sex scenes aren't distracting from the novel, nor are they to be seen as break points – in fact, they serve as glue, if you will; each intimate moment fuses the two MCs closer together and gives them what they both need to deal with the issues in their lives.

What stopped this book from getting 5 stars was the time frame in which this novel was set (with the exception of the epilogue). Less than a month goes by from the time of their first date to the end, and while I realized the two had been pining for each other for a while longer, this smacked a wee bit of insta-love to me.

I liked the subplot with Gabe and Dave, and hope that the next book will be about them. It was also nice to get a revisit with Jack and Ryan from the first book.

I received a free ARC directly from the author. A positive review was not promised in return.

Before I got heavily into reading, I had an addiction to TV shows that featured people whose lives were in crisis or who lived on the fringe of society. You know the ones: People who eat couch cushions, people who are in love with their cousins, fighting gypsy women, 1,000-pound men... the stranger, the better. But my favorite shows were the hoarder ones. I would get all teary eyed watching these people fight about 20 year old broken Christmas ornaments with weary loved ones. These shows spoke to me (I know, I'm strange). My husband always said that all I needed to be happy was a show about gay hoarders looking for love. When I started reading my book, imagine my surprise at the hoarder side-plot.

I'm clearly manifesting something into the universe. Next up, lotto winnings, okay?

Though clearly I clicked with the plot, what made this book was the awesome writing from Z.A. Maxfield. She did such a fabulous job creating the characters of Eddie and Andrew. They had this funny banter between them, just really palpable chemistry there. They felt like they fit so well together, and I loved their playful, surprising sexy-times. They were fearless and open and it was HOT. I felt like they knew themselves and their needs and weren't afraid to just go for it.

This book was so much more than a book about two men finding love. The messages about self-acceptance and opening oneself up to others were profound without being heavy-handed. I empathized with Eddie and Andrew without pitying either of them. I think the author struck really nice balances.

Z.A. Maxfield really outdid herself with this book, which far surpasses the first in the series, in my opinion. I can't wait to read the next in the series!

**Copy provided by the publisher in exchange for an honest review**

Z. A. Maxfield started writing in 2007 on a dare from her children and never looked back. Pathologically disorganized, and perennially optimistic, she writes as much as she can, reads as much as she dares, and enjoys her time with family and friends. Three things reverberate throughout all her stories: Unconditional love, redemption, and the belief that miracles happen when we least expect them. If anyone asks her how a wife and mother of four can find time for a writing career, she’ll answer, “It’s amazing what you can accomplish if you give up housework.”

You can find ZA Maxfield at

Promotional materials provided by Enchantress of Books Blog Tours. Buylinks are provided as a courtesy and do not constitute an endorsement of or affiliation with this book, author or booksellers listed.