Blogtour: The Playboy's "I Do" Deal by Tara Pammi

From the GLAMOROUS summer series, please welcome Tara Pammi with

The Playboy's "I Do" Deal 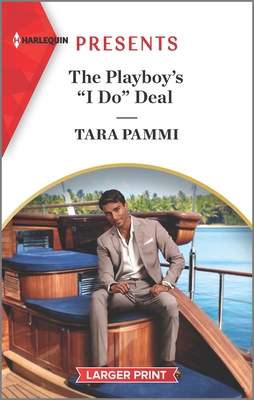 A billionaire’s Caribbean getaway just got a lot more interesting in this sizzling marriage of convenience story by Tara Pammi!

From the stowaway on his yacht!

Dev Kohli’s superyacht is Clare Roberts’s perfect hideout. A family betrayal has her running from a forced marriage. Trying to ignore the heat still blazing between her and Dev from their last encounter, Clare prepares to bargain with the billionaire…

Dev knows the PR expert can restore his company’s tarnished reputation. But agreeing to hide her in paradise—just the two of them—brings an intimacy he can’t escape. And as the threat to Clare increases, so does Dev’s need to protect her with something he never thought he’d offer—his ring!

What her friends also didn’t know, and Clare wasn’t about to tell them, was that their new client was the same man she’d had a one-night stand with recently. She’d never shared his identity with them, feeling a strange sense of protectiveness about that night. Also, because if she talked to them, then she’d have to own up that she’d mostly failed at abiding by the most important rule of one-night stands—keeping it strictly casual. Especially as Dev had clearly had no such problem doing that himself.

Athleta was far too big a fish for Clare to walk away from just because its CEO hadn’t proclaimed that he’d love her forever. And tonight had been her one chance to impress on him that her small PR firm could clean up his recently tarnished image.

Only the mobster’s goons had trailed her all the way from London to a conference in New York and then to São Paulo, and it was terrifying. Today the mobster’s intentions had been made crystal clear. He intended to simply…take her in lieu of the money he insisted she owed him.

For two weeks, she’d lived in terror of being snatched from wherever she was.

She’d been meaning to hightail it back to her hotel room when she’d spotted Goon Number One with a drink in hand on the main deck of the superyacht this evening. The short, blond, chubby-faced man had smiled angelically—clearly his cheerful appearance was a useful tool in nabbing unsuspecting women. It was the same man she’d seen leaning near the newspaper stand on the street where The London Connection’s offices were located, looking up at the sole window. The very same posh and supposedly secure street that they paid astronomical rent for.

He’d even bumped into her late one evening when she’d been rushing to catch the Tube after work. Apologized profusely. When she’d then seen him lounging in the foyer of her New York hotel, she’d wondered if she was hallucinating.

Now, he was here, aboard Dev’s yacht. Looking just as posh as the rest of the designer-suited men. Wearing an affable smile, chitchatting away. He’d almost touched her. Tried to talk to her as if they were long-lost friends. She didn’t have time to wonder how he’d got on board. She needed to hide. Now.

She ran her hand over her hips, contemplating the rounds the uniformed security guard was making. The emerald green silk skirt she was wearing had been a gift from Bea, and it gave her some much-needed courage. Without looking back, she stepped gingerly down the spiral staircase—who knew yachts could have staircases like this one?—and tried to not trip in her four-inch heels.

The champagne sloshed around in her belly again as she passed door after door. Peeked into one expansive lounge after another. Even in her panic, Clare couldn’t help marveling at the airy, contemporary spaces, the chic stylish interiors. The click-click of her stilettos on the gleaming floors sounded like a sinister countdown.

Heart pounding, she walked into the biggest cabin.

For a second, she was thrown at the sheer size of it. A large bed with a navy-blue duvet looked so welcoming that she took an involuntary step toward it longingly.

It was the feel of the luxuriously soft cotton underneath her fingertips that made her realize she was pawing it. Her eyelids felt heavy, her entire body swooning with exhaustion. She’d been traveling nonstop for a week. Hadn’t slept a wink ever since that ghastly man had started following her. But she couldn’t sleep now. Not if she wanted to remain undetected until after the party wound down.

After one last wistful glance at the bed, she shook off the lethargic fog that threatened to engulf her. She was crashing from the shock of seeing that mobster’s henchman again. Moving like an automaton, she walked into a massive closet.

Tara Pammi can't remember a moment when she wasn't lost in a book, especially a romance which, as a teenager, was much more exciting than mathematics textbook. Years later Tara’s wild imagination and love for the written word revealed what she really wanted to do: write! She lives in Colorado with the most co-operative man on the planet and two daughters. Tara loves to hear from readers and can be reached at her website.