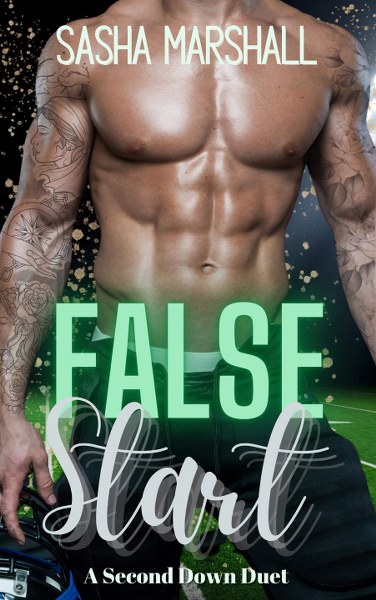 Zhanna Hale
THEN
My father is a legend. Some call me football royalty, and in my hometown of Louisiana, I suppose I am. His legacy didn’t prepare me for Bryant Hudson.

The quarterback. I swore I’d never date football players. Permanently. Yet Bryant had other plans.

Three dates and a handful of conversations, I handed him my heart without realizing it. But, Bryant shatters my soul. I’m left picking up the pieces. If only erasing him from my heart was as easy.
Bryant Hudson
NOW
I lost at the only game that matters. And it wasn’t even a game. It was and is my forever with Zhanna. I am the best quarterback out there. That should be enough, right? Achieving my dreams. But none of that matters without my woman beside me. When she left, she took my heart with her.

Now I’m back. To remind her of what we had. To see me—the man whose heart she owns, not the quarterback.

Our love is fate. Our lives are forever intertwined. I refuse to let a false start signal our end. I’m ready to repeat the play and show Zhanna she is my everything.

I'M OGLING MY AQUA Man calendar and the stud on the cover photograph above my sister's blonde head while listening to her rant about the mediocre sex she's been having with a guy named Dave. Out of the blue, an old, familiar smell wafts into my office. Goosebumps erupt on the surface of my skin and heat curls in my belly. My fingers tighten around the arms of my office chair, and my toes leave imprints in the soles of my shoes. I leap to my feet, cross my office in five swift strides, and then stick my blonde head into the hall only to discover the back side of the source of the scent. I'd know that juicy ass anywhere because my hands have intimately touched it for years.

Zina sticks her head out too to see what interrupted our conversation. "Ah, hell. What's he doing here?"

At the end of the hall, he takes a right toward the coach’s offices. We speed walk down the hall, pause before we turn the corner and wait to see where he goes. The door to the head coach’s office opens, and Otto Bullock steps out with a smile on his face. He loudly greets his guest by excitedly shaking his hand. Otto is my godfather and apparently a freaking traitor! The two men step through the office, so I use hand signals to indicate we should move, and Zina nods in understanding before we creep down the hall like two teenagers sneaking out for the night.

Zina is my sister and partner in crime. We're only eleven months apart, so we're pretty close… and nosey, which is how we end up leaning against the door to Head Coach Otto Bullock's office with our ears pressed flat against the piece of wood. We're doing this because my ex-husband just walked inside said office.

I should've known to trust my gut feeling this morning when I woke and felt dread. It's no coincidence that my otherwise unexplained anxiety and his appearance are linked. The man gives me heartburn… and lots of really great orgasms. God, he always got that right, but it wasn't enough to hold me and my college sweetheart together when things got tough.

Except… the sex. Lord. Have. Mercy. He is a god in the sack, and he uses his sexual prowess to make me do stupid things like sleep with him anytime we're in the same city. And that happens a good bit because he stalks me, and somehow always knows where I am. Swear to Jesus, the man is tenacious.

It's common knowledge that the New Orleans Voodoo football team has a critical quarterback issue at the moment–our last quarterback retired, and the backup QB asked to be traded to the North Carolina. It doesn't escape me that my ex is a quarterback, and he has a successful career in Los Angeles with the Spartans. He's a free agent this year, but the city loves him, and at age 28, he's still performing at the top. He took his team to the Superbowl last season against New England. They lost, but he still made it there and that's no easy feat in the NFL. There's no reason for him to leave his team.

"Stop breathing so loud," I whisper to Zina. Every time I think I can make out what the two male voices are saying, Zina starts breathing like Darth Vader.

"They said your name!" she whisper-yells.

A deep male voice sneaks up and scares the crap out of me and makes my sister scream in terror. Shit. Our cover is blown now. "Who unleashed the Hell sisters?" Assistant Coach Jed Jones asks. He flinches every time he sees us together, because we’re known for giving all the guys hell. Just last year, we crashed his wedding and replaced all the expensive wine with blackberry moonshine. I've never seen so many people vomit in formal attire. How were we to know the guests couldn't handle their liquor? Surprisingly, Jed wasn't upset because he said it was the only time he's actually liked his new mother-in-law. Apparently, she's a frisky cougar on the dance floor when she gets her shine on.

Before I can back away from the office door, it's wrenched open, and I fall forward into the hairiest chest I've ever seen peeking through an unbuttoned polo. I get a mouthful of Coach Otto's gray strands and cough them back out. Crap. I'm going to have to pick these off my tongue individually. "Hey, Coach," I say and smile, then spit out a few more hairs. I try my best to act casual and must epically fail because Coach is frowning at me like I've lost my mind. A hair tickles the back of my throat and makes me gag. Ugh.

"Zhanna," Coach says and arches a curious brow. "Are you alright?"

Other than choking to death on his fur, just freaking swell. "Yes, sir."

He uses his thumb to point behind him where my ex sits. "I guess you want to talk to this guy." Not particularly. "Come on in so we can chat."

I follow him through the door and reach up to pluck a hair from between my front teeth. Gross. I'm scheduling a dentist appointment just as soon as I get out of this little pow wow.

Bryant is seated on the left side of the massive office on a large, tufted leather couch that looks like it'd be a dream to sleep on. While Coach turns around and shuts the door, I notice that Bryant is wearing a Voodoo team polo in the beautiful black and gold colors, so I flip him the bird to let him know how I feel about that. He leans that gorgeous head of his back and a deep, hearty laugh escapes him. It's a good laugh that makes me remember the good times between us, and I almost laugh with him until I remember I don't like him. I cut that shit out.

Pale green eyes meet my hazels, and my heart comes to a skittering halt. I momentarily forget how to breathe. He is quite the work of art standing at 6'5 and looking like every girl's wet dream. He weighs in at 240 pounds with a tight, muscular body covered in black ink that makes him appear menacing. His long chocolate colored hair with caramel sun streaks is pulled back into a man bun. If he weren't dressed in gray dress slacks that showcase an ass you can pop a quarter off and the polo that shows off his corded arms, he would look like he just rolled his gorgeous ass out of bed. The week old beard rounds out the complete package of one sexy beast.

Finally, he stands like a gentleman.  "Zhanna, you're as beautiful as ever." He leans in to hug me and lays a sweet kiss on my forehead, and then he whispers, "I miss you."

He's been telling me that every time he's seen me for the past two years. He didn't seem to miss me when his dick was in another woman’s mouth. I can only assume that he's trying to get into my panties, which isn't hard to do. I’m ashamed. I pull out of the embrace as soon as it's acceptable, and smooth my pencil skirt out before I take a seat on the couch beside him. I cross my legs and wait for Coach to take a seat behind his desk.

Award-winning author Sasha Marshall, a concert photographer, toured with legendary bands such as The Allman Brothers Band. A self-proclaimed free spirit, she’s most often found outdoors, or painting a canvas, capturing a photograph, people watching, reading a book, or writing a new book. Sasha makes her home in the beautiful state of Georgia and loves to hear from readers.
Website * Facebook * Twitter * Instagram * Bookbub * Amazon * Goodreads