Talk Bookish To Me 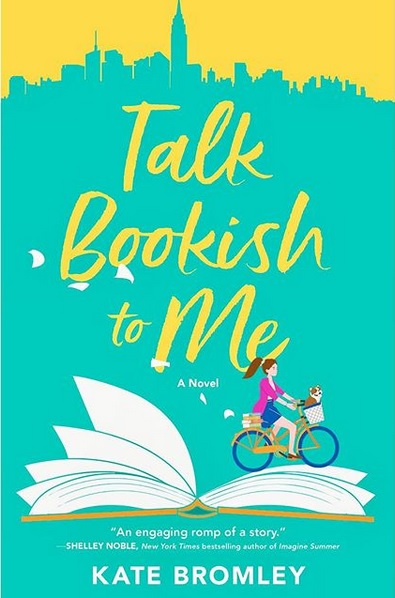 Kara Sullivan is definitely not avoiding her deadline. After all, it's the week of her best friend's wedding and she's the maid of honor, so she's got lots of responsibilities. As a bestselling romance novelist with seven novels under her belt, she’s a pro and looming deadlines and writer’s block (which she definitely doesn’t have) don't scare her. She's just eager to support Cristina as she ties the knot with Jason.

But who should show up at Cristina and Jason's rehearsal dinner but Kara's college ex-boyfriend, (the gorgeous and infuriating) Ryan? Apparently, he’s one of Jason's childhood friends, and he's in the wedding party, too. Considering neither Kara nor Ryan were prepared to see each other again, it's decidedly a meet-NOT-cute. There is nothing cute about this situation, and a bit of notice to mentally prepare would’ve been nice, Cristina! However, when Kara sits down to write again the next day, her writers' block is suddenly gone. She has to wonder what’s changed. Are muses real…? And is Kara's muse...Ryan?

Q: Please give the elevator pitch for Talk Bookish to Me.

A: Talk Bookish to Me is a contemporary romantic comedy that follows a bestselling romance novelist with writer’s block who suddenly finds herself inspired when she’s thrown together with her infuriating first love during the week of her best friend’s wedding.

Q: Which came first: the characters or plot line?

A: The characters! I had no idea what I was writing when I first started my manuscript, but I did know that the story was going to be about a quirky romance novelist in NYC who has an unexpected reunion with her college ex-boyfriend that she never forgot.

Q: Why do you love Kara and Ryan and why should readers root for them?

A: I love Kara and Ryan and readers should root for them because they refuse to give up on each other. It would be way easier for both of them to go their separate ways and move on with their lives, but there’s so much chemistry and history and genuine connection between them that no matter what, they just can’t get past it and, deep down, they don’t want to get past it. They also make each other laugh and absolutely light up when they’re together. They challenge each other to grow as people and to become the best versions of themselves, and I think that’s always something worth rooting for.

Q: What was your last 5 star read?

A: Ah, there’s so many! The ones that stick out the most to me at the moment are The Hating Game by Sally Thorne, Simmer Down by Sarah Smith, and The Trouble with Hating You by Sajni Patel.

Q: What is one thing about publishing you wish someone would have told you?

A: That it’s a much longer road than you think. But the good news is, it’s also very much worth it! Once you go from writing your book, to then querying, to then being on submission -- there’s a ton of hard work and then a lot of waiting and hoping. And even though the whole process is a very nerve-racking experience, it’s also extremely exciting and you will learn so much about yourself and the publishing industry.

KATE BROMLEY lives in New York City with her husband, son, and her somewhat excessive collection of romance novels (It’s not hoarding if it’s books, right?). She was a preschool teacher for seven years and is now focusing full-time on combining her two great passions – writing swoon-worthy love stories and making people laugh. Talk Bookish to Me is her first novel. Find out more on her website.