Series: The Realm of the Vampire Council

The Vampire’s Witch welcomes readers back to the world of vampires, witches, and magic.

Jaret Bachmann’s life spins out of control after a handsome stranger saves him from an attack along the bike path on Lakeshore Drive. His estranged high school sweetheart stalks him, the enraged ghost of his ancestor destroys his family, and his bike path savior-cum-lover abandons him after learning Jaret is a powerful witch.

A horrific family tragedy sends Jaret into deep depression. Struggling to find his way afterward, Jaret searches for comfort in the unlikely friendship of a secret vampire community.

Over time, Jaret’s friendship with the vampires strengthens and he forges a new family connection with Xavier, Thomas, and Catherine. But he and Anthony are estranged, and though their souls are entwined, their hearts are another matter.

Xavier, Thomas, Anthony, and Catherine return in this, the third book in The Realm of the Vampire Council series and a sequel to The Bachmann Family Secret.

Even after three years, living in a big city still creeped Jaret Bachmann out. He hated his fear of dark corners and alleys, not to mention his concern about getting beat up as a gay guy. Straight guys, no matter how peaceful they looked, worried him. In broad daylight, he felt more secure as long as he watched where he went, kept his head up, and stayed in populated areas. And he loved living in the Rogers Park neighborhood. Being in a metropolitan area was so much better for him than small town Colorado. Still, he only had a little light available before the sun went down tonight.

He giggled at himself to release some tension. His mind went to some weird place about the sun setting, like a vampire might jump out and attack him. As if.

Heading out to meet his best friend, Brady, Jaret relaxed once he got to the path along Lake Michigan. He passed several joggers, almost got hit by a bike, and meandered his way south. He contemplated taking the “L” but had plenty of time to walk. The spring weather warmed up Chicago, still a comfortable seventy degrees, even as the sun slowly descended in the west. The weather was perfect. Besides, he could always use the exercise.

Jaret felt safer and got his iPod out to search for music. He loved Lady Gaga; why not a little monster love? Or Train’s latest CD rocked. Still, he paused at “Relax” and grinned. That song totally kicked ass. Totally. And, he hadn’t listened to much of his favorite singer’s first album in a long time. If he loved Lady Gaga, then words couldn’t describe his adoration for Mika.

He popped in his earbuds and picked up his pace. He even danced a little, despite being in public and seeing the few passersby glancing his way as if he’d gone insane.

The path grew darker with the setting sun and the trees lining both sides of the trail. This dance mix steeled Jaret’s nerves. He wiggled his butt, jumped to the side, and smiled at a little old lady and her dog as they walked by.

A few yards later, he was alone. He fretted a little but cranked the music to ignore the world around him. To comfort himself, he reached into his pocket and rubbed the ruby necklace he always brought along for protection. All the Bachmann heirloom jewels empowered his witchcraft and kept him safe, and he loved the beautiful rubies most of all. In a pinch, he could always use his magic to ward anyone off. He’d never had to use his ability to defend himself, except from ghosts, but knew he could if needed. Being a witch had its advantages.

Jaret almost missed the group of four guys sitting off to the side, watching the lake or something. He slowed when he glimpsed a bright-red shirt and thought of his boyfriend, Steve. He’d seen Steve earlier in the day, wearing this totally hot red T-shirt that clung to his chest and showed off his gorgeous biceps. He couldn’t remember the shirt exactly, though he thought it had a University of Nebraska logo on the front.

Jaret lurched to a stop when he bumped into someone. “Uh, oh. Sorry. I didn’t see you.” He glanced up to see another guy with a pretty big belly, yet tons of muscle, not to mention a wicked scowl.

The guy yanked out Jaret’s earbuds and glared down at him. “Fuckin’ fairy. Watch where you’re walkin’.”

“Sorry,” Jaret barely whispered and started shaking. He’d heard about gay bashings but had never experienced one. In fact, he had never been in a fight. He could see this dude meant him harm by the way he loomed over him.

Jaret reached into his pocket for the necklace. His shaking hands got the better of him, and his finger got stuck in the little coin pocket instead.

Growing more afraid, Jaret stepped to the side to continue until the guy moved with him and blocked his way. Jaret stared at the familiar logo of Northwestern football on the purple T-shirt. He often saw the very shirt on Steve. This guy was enormous. Not good.

His heart racing, Jaret scanned for anyone nearby watching. He spotted the group of four guys out of the corner of his eye. Any chance for help evaporated when two of them moved closer, and he saw they, too, wore Northwestern football gear.

One of them grinned and clapped. “Caught yourself a little fag, Mikey? What you gonna do with him?”

Mikey laughed and crossed his bazooka-sized forearms over his chest. Then he reached down and petted Jaret on the head like a dog. Jaret had little time to act to protect himself. There was no time to get the necklace out. He shot to the side to move around the asshole, but the guy put out his leg and tripped Jaret. He sprawled onto the path, skinning his elbow. 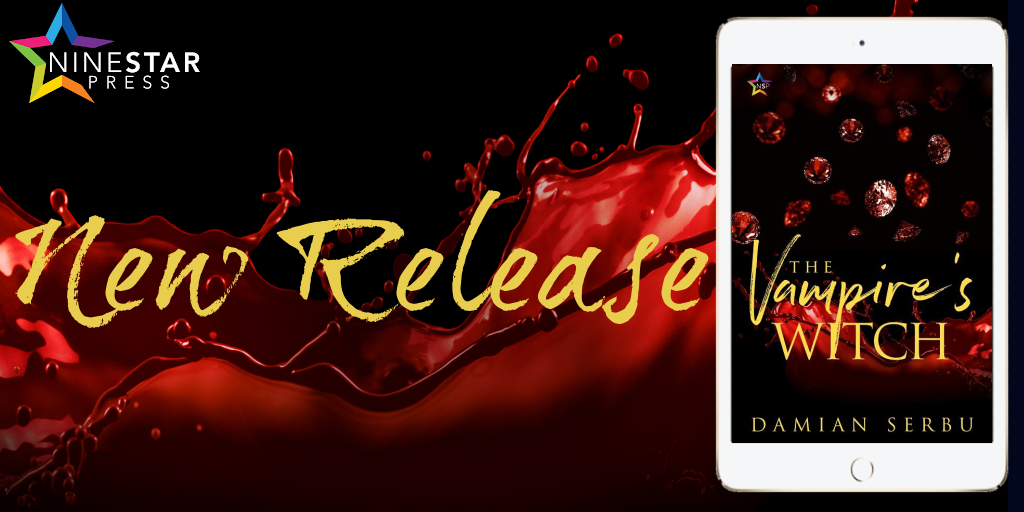 Damian Serbu lives in the Chicago area with his husband and two dogs, Akasha and Chewbacca. The dogs control his life, tell him what to write, and threaten to eat him in the middle of the night if he disobeys. He has published The Vampire’s Angel, The Vampire’s Quest, and The Vampire’s Protégé, as well as Santa’s Kinky Elf, Simon and Santa Is a Vampire with NineStar Press. The Bachmann Family Secret is scheduled for release July 2020. Keep up to date with him on Facebook, Twitter, or at www.DamianSerbu.com.