Last year, Javier Medina was your average socially awkward gay high schooler with a chip on his shoulder. This year, he’s…well, pretty much the same, but with bonus superpowers, a costume with an ab window to show off his new goods, and a secret identity as the high-flying, wise-cracking superhero Blue Spark.

But being a Junior Hero means that Javier gets all the responsibility and none of the cool gadgets. It’s hard enough working for the Legion of Liberty and fighting against the evil Organization, all while trying to keep on top of school work and suspicious parents. Add in a hunky boyfriend who’s way out of Javier’s league, and an even hunkier villain who keeps appearing every time said boyfriend mysteriously disappears, and Blue Spark is in for one big dollop of teenage angst. All while engaging in some epic superhero action and, oh yeah, an all-out battle to protect Liberty City from the forces of evil.

Welcome to the 100% true and totally unbiased account of life as a teenage superhero.

When I woke up, my mask was lying beside me on the ground, and I felt like my entire head had been squeezed like a pimple.

It took me a few minutes to get my bearings, and by the time I realized the Raven was there with me, she was putting my mask back over my eyes and checking my vitals. Masks have a way of obscuring expressions, but I could see her jaw was tight and her lips were even thinner than usual.

“What happened?” I groaned, my voice raspy. I was starting to get memories back, of the smoke and explosions of the battle, and of him. That bastard smashing my head into a mirror—I raised a hand to my forehead and felt crusted blood through my glove—and then of us fighting, and of a rather unheroic rage that had come over me as we did so. The last thing I remembered was my hands on either side of his head, shooting sonic waves into his ears so hard his eyes were rolling back, and his big meaty hands around my neck, squeezing me into darkness.

“Don’t know.” The Raven’s ambiguously Slavic accent was harsher than normal. “I found you here, with your mask off. Who did it, do you know?”

I guess I should back up a bit. Jimmy Black was my sworn enemy, if you go for dramatics like that (I totally do), and I’d met him before all this crap with the Organization started. I’d been on a date with Rick Rykov. My first date. Ever, that is, and I was pretty convinced the whole thing was a setup to make fun of me, because that would be typical. But then Rick actually showed up at the café, and we sat there for twenty minutes drinking coffee and discussing our lives like regular people, and there was absolutely no sign of the whole thing being a prank or some plan concocted by him and his friends to humiliate me.

I mean, aside from being gay, Rick was, like, standard bully material. He was a football player, even—six feet of lean teenage muscle and popularity. And I have a theory that being gay in high school just pushes your social standing to an extreme either way. Like, if you’re already popular, and then you come out as gay, you become this amazing, brave individual who inspires change (exhibit A: Rick Rykov). But if you come out as gay, and you’re that weird little Spanish dude who came to America in first grade and couldn’t speak any English, who decided to compensate for that fact by eating a bug in front of his entire class, which was never forgotten, ever, by anyone…

Well, see exhibit B: Javier Medina (that’s me, by the way). Skinny, brown, nerdy. I’m sure you can picture it. That, combined with my family not exactly being wealthy, meant I got picked on a lot in school, even before the bug thing, so I’m a little skittish. Or possibly a lot skittish. You decide.

So anyway, naturally, considering my rather extensive history with bullies, when a superhot, superpopular football player came striding down the hall toward me after class one day, my first instinct was to run away. Unfortunately, Kendall (who apparently has superhearing that I don’t know about) had overheard that Rick was planning on asking me out and grabbed my arm to keep me from escaping. She’s pretty heavyset, and I guess she was using her weight to her advantage, because I was basically rooted to the spot despite having, you know, moderate superstrength.

So then Rick strolled up, cool as you please, and introduced himself. Like, he full-on shook my hand. As if it were a job interview. And then he asked me out, and I was thinking I might be stupid enough to eat a bug, but I sure as hell wasn’t stupid enough to think that Rick Rykov was actually asking me out on a date. So I told him to eff off.

Yeah right. I actually said something along the lines of, “Uhh…you want to go…on a date? With me? Wh… Why?”

And he said, “Because I like you. I think you’re cute, so I thought we could get to know each other a bit better over coffee.”

At this point, I was basically giving myself whiplash looking around trying to see if I was in the process of being ambushed with the eventual intent to stick my head in the toilet. And then I got kind of angry because, like, here I was, busting my butt every single day to save people’s lives and keep the public safe. Screw putting up with this high school bullying crap.

So I decided I would go out with Rick, and if he or any of his buff football friends decided to try to pull one over me, I was just going to spontaneously snap and beat the crap out of them (or at least use my powers to pull some fun tricks with them) and plead temporary insanity to Captain Liberty after the fact.

Rick seemed pleased, and a little surprised I’d agreed. We set a date, and I went fully expecting to be doused with whipped cream, or laughed and jeered at, or at the very least stood up.

But Rick was there, leaning back in one of the little spindly café chairs that looked like it might break under his weight and sipping some frothy drink. When I sat, he shook my hand again, and then we just sort of…started talking.

Which I know isn’t a big deal, because, like, people talk all the time. But not me. I mean, I talk to Kendall, because she’s my best friend and has been forever, and we tell each other everything. I talk to my parents, in Spanish mostly, which is still a bit easier for me, funnily enough (although I’m sure you can tell I have an absolutely superb grasp of the English language). But with everyone else? It’s kind of like the fewer syllables I can use, the better. I mumble my way through life. I just can’t make myself say what I’m thinking most of the time.

So yeah, it was pleasantly surprising to be able to talk to Rick. He asked me questions and waited patiently while I answered them, and then offered information about himself. He lived with his parents in a really nice part of town, although pretty close to me, and had a sister and a cat. And I told him, a bit defensively, that I lived with my parents in a crappy little apartment that didn’t allow pets, and that my dad worked on computers and my mom worked at a gas station so we could have a little extra income. I was all set for Rick to be all judgey or awkward (or worse, feel bad for me) about my poorness, but he didn’t seem to care about that at all. He actually seemed to genuinely want to get to know me.

And then, just when I was starting to relax and believe that this was actually a thing that was happening and I wasn’t going to, you know, die, Rick’s phone rang. He had a sort of awkward conversation and said, looking really let down, “I’m sorry, I’ve got to go to work. Last-minute thing.” Then his face brightened up a bit. “But we should do this again sometime.”

I agreed, and he went off, and I was left sitting there for about ten minutes finishing my coffee and thinking. And then my phone rang too.

I should have figured it out right then and there.

It was the Legion dispatch, about as polite as ever, which is to say one step up from a robot. Actually, scratch that, the Legion AI was way friendlier.

So she was all, “There’s an incident downtown, not far from your location. Can you respond?”

And I figured why not, since I was pretty pumped at that moment, and anyway, it was my job. Like, I got paid for it and everything. So I told her I’d be there in two minutes, and grabbed my bag and headed out.

Now, listen up, because I’m going to let you in on a little secret about switching from your civilian clothes into your superhero getup.

I mean, maybe except for old pros like Captain Liberty. I’ve seen him change into his costume so fast it was as if he must have been wearing a tear-away outfit, complete with, like, origami cape and boots in his back pocket. But for the rest of us, it’s three-plus minutes of awkwardly hunching on top of a building—try even finding a telephone booth these days—ripping off your clothes and pulling on the parts of your costume that don’t fit under them, and then you have to try to fit everything, including your shoes, into your backpack. And then you have to look for a place to stash your backpack where it won’t be stolen or crapped on by pigeons or something.

And the Legion really does expect you to respond to a call within only five minutes. I don’t know why they haven’t invented some sort of quick-change technology. Maybe they have, and they just don’t make it available to Junior Heroes.

It’s a complete rip-off being a Junior Hero, by the way. You’re supposed to be only assigned to low-risk stuff, but half the time it’s just as dangerous as anything else anyway, and the rest of the time it’s freaking boring. 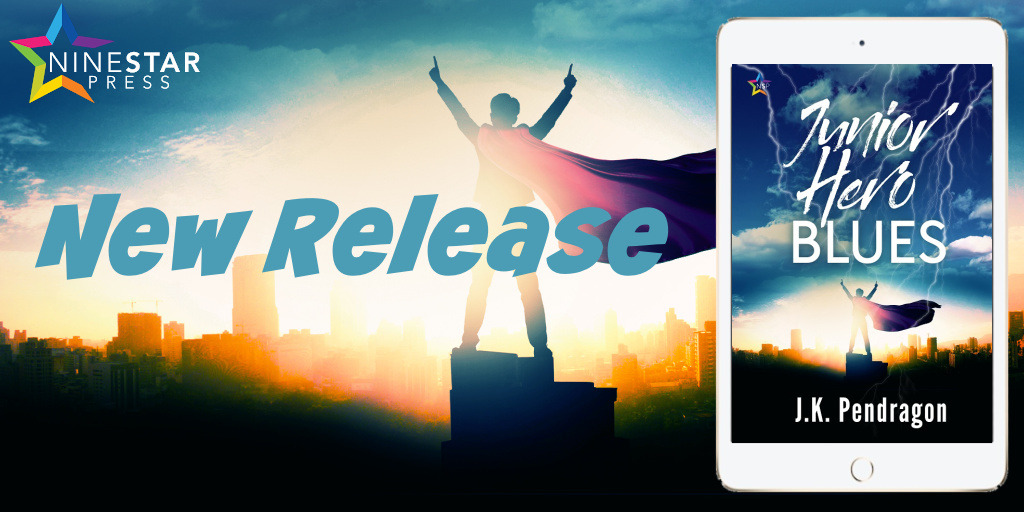 J.K. Pendragon is a Canadian author with a love of all things romantic and fantastical. They first came to the queer fiction community through m/m romance, but soon began to branch off into writing all kinds of queer fiction. As a bisexual and genderqueer person, J.K. is dedicated to producing diverse, entertaining fiction that showcases characters across the rainbow spectrum, and provides queer characters with the happy endings they are so often denied.

J.K. currently resides in British Columbia, Canada with a boyfriend, a cat, and a large collection of artisanal teas that they really need to get around to drinking. They are always happy to chat, and can be reached at jes.k.pendragon@gmail.com.