to hire him as a friend for his lonely, widowed dad. 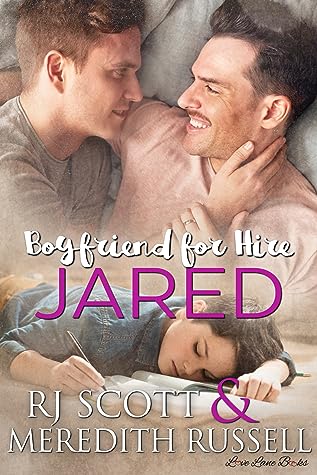 Jared is good at his job, but his soft heart means that he often finds himself in the weirdest of situations. A kind-of-threesome, a disappearing swan, and a destroyed hotel room are just the tip of the iceberg, but he is a popular boyfriend-for-hire and always in demand. He dreams of working as a family psychologist one day, and as his work with Bryant & Waites is funding his studies, the last thing he wants is to lose his job.
At a make-or-break meeting, Jared vows to focus on being strictly professional. Still, almost immediately, he meets Luka sitting on the office steps with pocket money in hand and with a sadness that melts Jared’s resolve. Luka explains that his mom passed away some years ago, and his hardworking father needs a friend. Jared has no intention of taking Luka’s pocket money, but he wants to make Luka smile again, and if being hired as a friend for Luka’s widowed dad is what it takes, then he’s all in.
Being a single dad to eleven-year-old Luka is the best thing in Nate’s world, but add running a bar with long hours, and his work-life balance is screwed. There’s certainly no time for relationships, and even though Luka worries about his dad’s love life daily, romance is the last thing on Nate’s agenda. Owning Rhea’s Bar and keeping his head above water is second only to his love for Luka. His entire world consists of his son and the bar until Jared stumbles into his life. Even though Nate won’t admit it, he’s lonely, and Jared is the first friend he’s made in a very long time. Could their friendship become something more?

“I didn’t get fired,” Jared announced with pride, but Rowan just huffed and didn’t move from the door. “What’s up?”

“There’s a kid on our steps,” Rowan muttered, “and he said his dad was coming but that was ten minutes ago and no sign of the dad.” He shrugged into his coat. “I’m going to get him in and call the cops—a kid that age shouldn’t be on his own. Poor boy is all upset about his dad, and something about his mom. He came in trying to hire a boyfriend.”

“This is ridiculous, Gideon said to wait for the dad, but it’s not sitting right with me. I’ve tried to bring him inside, but the last time I asked he refused to move. I’m going to sit there with him.”

“You want me to talk to him?” Jared didn’t know where that came from, but he could see Rowan was upset and worried, and Jared had slipped easily into his super-helpful mode without even realizing.

“Good luck, shout if you need me.”

Jared zipped his coat and headed out.

Three steps down and he drew level with the kid “Hey,” he murmured so as not to scare him.

The boy glanced up at him, around ten or so, dark hair sticking out from a beanie, wearing a thick green coat, jeans, and Nikes. He hugged a dark notebook and was on the verge of tears.

The boy gave him a tremulous smile. “Hi.”

Jared considered what to do next, and none of the options included walking off and leaving the kid. At least the March snows had melted away, and the boy wouldn’t be freezing, but still, he was alone.

“Hey Luka, I’m Jared.” He offered a fist to bump and Luka didn’t leave him hanging, his notebook slipping. He caught it and then stared back up at Jared.

Jared caught the glint of interest in dark eyes. “Yes. Do you work around here too?”

“I’m only eleven,” he scoffed.

“How about school then?”

“It finished at three.”

“And you thought sitting on a step in the cold was a good idea to pass the time.”

“I’m not cold.” He shivered a little and exposed the lie for what it was.

“Where are your folks?” Jared wondered if Rowan was right and they should take Luka into the office, or just go straight to calling the cops, because there was no way he or Rowan were leaving him sitting here.

“Dad’s at work but I had to come here and see you.”

“Me?” Jared couldn’t recall having met the kid, but there was no doubting Luka’s conviction.

“Not just you, all of you. My dad works a lot, running the bar, and he’s always looking after me, or working, and since my mom died…” He cleared his throat, the words difficult to say. Compassion flooded Jared and he edged a little closer to Luka, offering non-verbal support where he could. “I want him to have a friend, and I want him to go on a date, and it doesn’t matter if it’s a girl or boy, ‘cause my Auntie Lee says he’s bri-sextual.”

Bri-sextual? Jared folded his arms and leaned against the stair railing.

“So, I came here to get one for him, but they said that my dad would need to go in, and they wanted me to stay so they could call the cops. But I don’t need to be arrested. Plus, that man, he gave me a card, said Dad could call the number on it if he wanted, but I can’t tell Dad he needs to go in to get a friend, ‘cause he’d kill me, not for real, but he’d be angry, and now I don’t know what to do.”

“Do you have your dad’s number?”

Jared read Luka’s lie—this kid was transparent. “Is there someone waiting at home for you? What’s your address?”

“I forget. Look, can I read you something?” Luka asked with a tinge of hope in his voice.

“Once you give me your address, then sure.”

“How about I read this and then give you my address.”

USA Today bestselling author RJ Scott has written over one hundred romance books. Emotional stories of complicated characters, cowboys, single dads, hockey players, millionaires, princes, bodyguards, Navy SEALs, soldiers, doctors, paramedics, firefighters, cops, and the men who get mixed up in their lives, always with a happy ever after.
She lives just outside London and spends every waking minute she isn’t with family either reading or writing. The last time she had a week’s break from writing, she didn’t like it one little bit, and she has yet to meet a box of chocolates she couldn’t defeat.

Meredith Russell is an author, cover artist and vampire slayer. Okay, she may have made that last one up, but that’s what she loves about writing—the possibilities. No matter where her stories are set—from fantastical worlds of zombies and werewolves to the ambling life of an English village—she strives to write about romance and the tales of men searching for their happy ever after. Meredith  writes the stories she loves to read—complex, emotional, a journey, and sometimes unexpected.
In 2012 Meredith had her first novels published, as well as being commissioned to do her first cover design. She now splits her time between populating fictional worlds with characters she adores, and helping other authors bring theirs to life through cover art. She has had a number of popular releases, including Dead Things, Just Jack, and both the Sapphire Cay and Boyfriend for Hire series' written with RJ Scott.