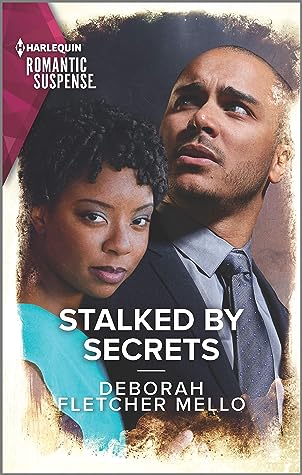 If she wants to know his secrets…

This time it could be fatal.

Journalist Neema Kamau will risk anything to uncover the truth. She’ll even get close to politician Davis Black in order to investigate his possible organized crime connections. But when her professional interest turns personal, Neema knows that she risks losing the story—and the man—if she tells Davis the truth. And the stalker who’s circling them both might rob her of the chance to make things right…

To Serve and Seduce

Book 1: Seduced by the Badge

Book 2: Tempted by the Badge

Book 3: Reunited by the Badge

Neema Kamau found her father’s voice especially irritating as he called out from behind her. She stole a quick glance at her wristwatch. She was already late for her job at the Chicago Tribune and she didn’t need a lengthy lecture about something that really wasn’t important to her. She thought about ignoring him but knew that would only make the lecture that came later even more unbearable.

She turned slowly, meeting the look he was giving her head-on. He stood there, hands locked tight against his waist, his expression stern. “Yes, Baba?”

“Are you coming to the restaurant tonight?” Adamu Kamau queried. “We could use the help.”

The restaurant he referred to—the Awaze Grill—was the family business, and it was his pride and joy. Born and raised in Kenya, her father had immigrated to the United States when he’d been in his early twenties. A naturalized citizen with a doctorate in mathematics, he had been one of the most prolific analytical minds to ever work for the Pentagon. But a massive heart attack ten years ago had shifted his priorities and redirected the lives of his wife and children.

The move to Chicago had been the first big change, the whole family leaving DC to follow him to Illinois. It was only recently that Neema had realized her parents opening their family restaurant was truly a dream come true for the two of them.

The building on West Reynolds Street had been purchased outright, the couple dipping into their life savings to make it their own. After renovations, Awaze Grill was born, featuring the best recipes of their east African culture. For her family, it was a second home of sorts. For her parents, the restaurant quelled any feelings of emptiness they had for their African culture in America. Being able to share that culture with others made everyone feel like family to them. For Neema, working when she was needed rewarded the gratitude she often felt for all her parents had done for her.

Raised according to her parents’ Kenyan culture, Neema knew that family was central to everything. Children were expected to honor their parents and fulfill any obligations asked of them. Saying no to her father was not an option, nor would she have even considered it.

He nodded his balding head. “Also, I need you to stop by that alderman’s office. You know the one.”

“Yes, him. He needs to do something about the drug activity on the corner. It isn’t good for the neighborhood, and the police aren’t doing anything to help with the situation.”

“I sent him a letter last week, Baba. We should probably give him a little time to respond.”

Her father shook his head. “No. You need to follow up in person. To be sure he understands how big the problem is. These young boys are getting out of hand. One of them cursed me yesterday. Outside of my own front door! No respect! No respect at all!” The old man threw his hands up in frustration.

Neema shuttered a soft sigh. “Yes, Baba. I’ll try to run by his office on my lunch hour.”

Her father gave her a nod then stepped forward to give her a kiss on the cheek. “You’re a good daughter, Neema. You have a good day.”

Neema smiled. “You too, Baba!”

Once she was out the door, Neema sighed with audible relief. It hadn’t been nearly as painful as she had anticipated. In fact, she was feeling slightly guilty for imagining a doomsday lecture from her father. She’d been certain her late-night hours the previous evening would have had her father on a rampage. It wasn’t often that she agreed to dinner and drinks with her coworkers, specifically because of how her parents reacted when she did. It was one thing when her shift at the news

room required her to be out all night. It was something wholeheartedly different when she was out all night socializing. She was surprised her father hadn’t mentioned it at all.

Much like her father, Neema had moments when she herself overreacted, having to bite her tongue to keep from being snarky. The morning had begun to feel like one of those days, other things on her mind. Like her stagnant career and the fact that she saw no hope of things improving.

Admittedly, she had promised her father to use her lunch hour to reach out to their district alderman. But, truth be told, Neema had no interest in trying too hard. She knew who Davis Black was. Everyone knew the city alderman and his family. The Black name was synonymous with most everything that happened in the Chicago judicial system. His father was the police superintendent. His mother was a federal court judge, and all his siblings were gainfully employed cops, attorneys or civic leaders. They didn’t just make or enforce the law. Most of the Chicago community considered them to be the law.

For months, Neema had been angling for a story on the Black family. Something that would carry her byline and merit national attention. She dreamed of a Pulitzer Prize and the accolades of a breaking news story. It would validate her decision to forgo a career in medicine, like her parents had wanted, for the degree in investigative journalism that she had achieved. It would show that she’d made the right decision following the one and only time she’d defied them.

About the author:
Deborah Fletcher Mello has been writing since forever and can’t imagine herself doing anything else. Her first romance novel, Take Me to Heart, earned her a 2004 Romance Slam Jam nomination for Best New Author, and in 2009, she won an RT Reviewer’s Choice Award for her ninth novel, Tame a Wild Stallion. Born and raised in Connecticut, Deborah now considers home to be wherever the moment moves her.
Find her on Facebook or Twitter.
Promotional post. Materials provided by the publisher.