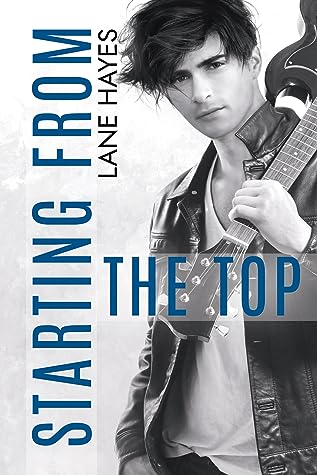 The guitarist, the dad, and a band on the rise…

A quiet place to live and some time to recharge before my band heads out on the road again sounds amazing. I wouldn’t mind a distraction too, but my new neighbor is off-limits. There are rules about not getting involved with your bandmate’s ex, right? And Sean isn’t my type anyway. He’s too bossy, too commanding, and he has way too much baggage. I’ve learned that it’s best to let go of the heavy stuff. So why am I so drawn to him?

Coming out later in life has taught me to protect my privacy at all costs. And while juggling a handful of businesses and two kids isn’t easy, I excel at the art of multitasking and keeping everything separate. But Johnny blurs those lines. He’s easy-going, sweet-natured, and cool. In short, he’s everything I’m not. I want to know all about him…starting from the top.

It's a second chance age gap story and a friends to lovers/casual to serious romance.

Johnny is the guitarist of Zero. They're well on their way to the top. They haven't made it yet, but after their next album the prognosis says their fame is going to go way up.

During the few months of down time between the end of a tour and them beginning to record their next album, Johnny is trying to find something to fill his days. He has a new house and a cat, but he feels lonely.

Sean is a businessman, well established and with many connections. He's a divorced father of two and shares custody with his ex-wife. He also has an adorable dog named Lullah.

They have ran in the same social circles for years, since they have mutual friends, but whenever they happened to meet it was because they were part of a larger crowd. They were never friends, just casual acquaintances.

As it happens, Johnny's new house is just a few doors down from Sean's and the two start to spend time together.

The attraction, the connection, the sexual chemistry - it's all there. But neither feels like he's in a place to start a serious relationship. The solution they come up with sounds pretty great to both of them: casually mess around for a few months and then easily move on.

Seems pretty simple. Except for the feelings. That's another story.

There's some great relationship angst while they're trying to figure out what to do next. Their friends-with-benefits arrangement doesn't seem to work anymore so they have to decide how to best handle the situation they have found themselves in. They don't think that they can move forward, but their feelings are a lot different from when they first started seeing each other so they can't keep going as they have so far either.

Sean's relationship with his ex was a complicated one, so it was realistic. I liked her and I liked how the author presented her. Characters from the other books in the series are present, as it was to be expected, and it was great to see them all coupled up and happy.

I loved Johnny and Sean's characters, both of them were mature and down to earth, even if not exactly sure about where their life was going. I also liked that here's a family feel in this book, as Sean's kids were very present and not just a mention. They actually play quite an important part in the whole story. And there were pets!

Even though you can read the book as a standalone, I highly recommend reading all - or at least most - of the rest of the books in the series and, preferably, in order. The series basically follows Zero's rise to fame along with its members finding love, so you'll be missing out details by skipping books. Plus, there are so many characters between the two bands, Zero and Jealousy, that, if you're not familiar with any of them, you'll likely feel a bit lost at first in the scenes were they're all together.

I always enjoy Lane Hayes's stories and this one was no exception. Highly recommended!

Thanks for stopping by, happy reading!

Buylinks are provided as a courtesy and do not constitute an endorsement of or affiliation with this book, author or booksellers listed.
Posted by Ky at 12:00 PM