Blogtour: The Cross of Ciaran by Andrea Matthews

The Cross of Ciaran
by Andrea Matthews
Genre: Paranormal Romance 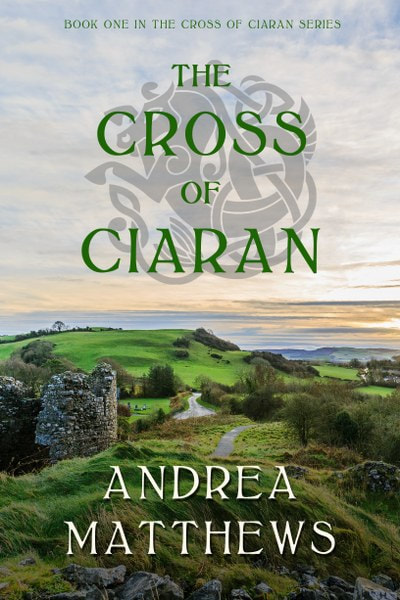 When a fifth century pagan priest is unearthed in Ireland fifteen hundred years after being entombed, archaeologist Caitlin O’Connell is convinced it’s the find of the century. The body is in perfect condition, right down to the intricate tattoos adorning the Celt’s skin. In fact, if scientific data hadn’t proved otherwise, she would swear he hadn’t been interred more than a few hours.
Eager to discover more about the mysterious Celt, Caitlin accompanies the body back to the New York museum where she’s employed, but before she has time to study him, the priest disappears without a trace. Rumors surrounding the event begin to circulate and result in the excavation’s benefactor pulling the plug on the entire expedition.
The rumors are not far off the mark though. After being buried alive for betraying his goddess and his priesthood in the dawning age of Christianity, Ciarán wakes to a strange new world. Alone and frightened in an unforgiving city, he stumbles upon the only thing familiar to him and seeks sanctuary within the church walls. With the help of the parish’s pastor, Father Mike, Ciarán slowly grows accustomed to his surroundings, though he’s plagued by dark dreams and the disturbing sensation that an evil from his past has followed him into the future. But a more immediate danger lurks on his doorstep.
Caitlin is determined to get to the bottom of the mystery concerning her missing Celt, and when she meets her Uncle Mike’s new handyman, Ciarán Donnelly, she’s convinced the handsome Irishman knows more about the theft than he’s letting on. Yet, even she can’t deny the attraction between them, simmering below the surface and blurring the lines between her personal and professional life. But will Ciarán’s secrets draw them together or shatter their future forever?

What Kind of Research Do You Do Before Writing?

Since, I’ve always loved research, a fact which led me to a degree in history and ultimately a career as a librarian, it was only natural that it became a big part of my writing process. Once I come up with an idea for a novel and the backbone of the story, the next thing I do is dig into the research I’ll need to bring a bit of authenticity to the book. For the Cross of Ciarán series, I’ve created an imaginary priesthood, but that didn’t mean there was no need to do any research. I read up on Celtic mythology, as well as how people in 5th century Ireland lived, etc. I tried to incorporate the appropriate worldview and research the type of housing Ciarán might have lived in, the clothing he might have worn, and the food he might have eaten.

What I discover during my research has a great impact on what happens to my characters and how they react in a given situation. Since the present-day part is set in the 1960s, I also had to research that period. Even though I lived through it, the memory is a funny thing, so I needed to make sure I got it right. Caitlin is an archaeologist, so I had to do some research into that as well, keeping in mind the decade I was dealing with. It doesn’t end there, however. Even as I’m writing, my research continues as new questions appear. At one point, I paused the story to check out what berries the characters might have been picking. A small detail, I know, but I think these little bits of information help enhance the story.

I won’t say I never stretch the truth a bit. There are some things that are open for interpretation or fit the story so well that a little nudge doesn’t hurt. For example, Ciarán occasionally speaks Irish, though I chose to use modern Irish instead of the earlier dialect he would have been using  It is fiction, after all, and my intent was to add a little flavor, not confuse the reader.

For the most part, however, I try to be as accurate as possible, hoping to give the reader a real sense of the period and maybe even encourage them to read a non-fiction book on the subject.

Initially, I have a basic cast of characters around which the story revolves, but as I write, new characters appear from time to time. Generally, they are minor at first, but sometimes they grow in importance as the novel and series continues. In fact, I just might have hinted at one or two in Cross of Ciarán.

As most of my books are part of a series, it’s only natural for other characters and storylines to develop. I look at it as if I were meeting new friends — and sometimes enemies — along the way. Characters enter and exit the worlds I’ve created. Some play minor roles, never reaching more than acquaintance status, and they might keep their stories to themselves. But others will grow in importance and maybe even encounter adventures of their own as the series progresses, many times interwoven with the lives of the central characters. Even for the main characters themselves, new stories develop as their lives play out on the pages of a novel.

Hopefully, there will at least always be a happy for now ending, but new trials and tribulations are waiting only a book away. What they are and who they will involve only time can tell.

Who Designed Your Book Cover?

Jennifer Quinlan, better known as Jenny Q, designed all my book covers. She’s easy to work with, always keeping your vision in mind while designing the covers, and provides a number of mockups for you to choose from. The only problem I’ve ever encountered was trying to decide which cover to choose, but even there, she’s more than willing to provide some guidance when asked. Her work is always professional and polished, and I’ve never been disappointed in the results. I’m sure her covers have encouraged many a reader to take a look inside. If you’d like to check out samples of her work, here's her website.

Andrea Matthews is the pseudonym for Inez Foster, a historian and librarian who loves to read and write and search around for her roots, genealogical speaking. In fact, it was while doing some genealogical research that she stumbled across the history of the Border reivers. The idea for her first novel came to mind almost at once, gradually growing into the Thunder on the Moor series. And the rest is history, as they say.
Website * Facebook * Twitter * Instagram * Bookbub * Amazon * Goodreads