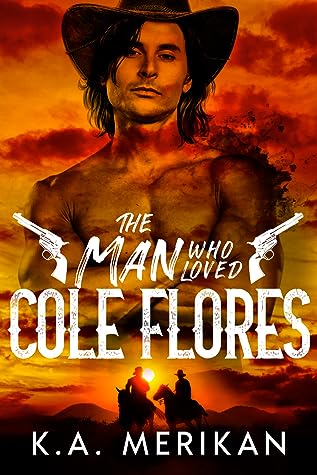 Ten years ago, a vicious gang called the Gotham Boys descended on a homestead in the mountains like a pack of wolves, leaving nothing behind but death and destruction.

Ned O’Leary was the only one to survive the ordeal.

He lost hope for revenge long ago, but its flame erupts in his heart when the gang is spotted again. By a stroke of luck, he is recruited to infiltrate the Gotham Boys and bring them all to justice. Ripped out of his wholesome life on a ranch, he has to find his footing with a band of ruthless outlaws who challenge his morals every step of the way.

But the one who tests him most of all is Cole Flores. Deadly, full of himself and unpredictable, the gang leader’s adopted son should be a man easy to hate, but instead, he sparks illicit desires Ned has never felt before.

Torn between love and revenge, lust and loyalty, Ned has to face impossible choices that are bound to leave scars, no matter how hard he tries to do the right thing.

“I don’t know what this means, or how to do this with you,” he whispered as his heart broke into a gallop. “But I want to. I need to.”

Dark, dangerous, yet desperately romantic, “The Man Who Loved Cole Flores” is a gritty western M/M romance novel. Prepare for violence, emotional turmoil, and scorching hot, explicit scenes, as well as a heart-pounding cliffhanger to book 1.

The epic love story of Ned O’Leary and Cole Flores gets its HEA in book 2 - “The Man Who Hated Ned O’Leary”.

So, you see the cover, and it captures your attention. Then the title catches your eye, and it's so unique and intriguing that it makes you want to know more. You want to read the blurb and see what it's about, so you do that too.

But nothing can prepare you for what comes next...

Cole Flores and Ned O'Leary are part of a harsh and brutal world, where justice is scarce and the laws are twisted to fit those who enforce them.

The Wild West, they call it.

I'll agree with that. What started as a promise, as a hope for justice and a better life, became a nightmare in the heat of the desert and in the company of immoral men.

Ned O'Leary made a choice and it led him down a path he never could have imagined.

Cole Flores made a choice too and it changed everything he knew.

Together, they tried to navigate quietly in a world where two men can never be together, where murder and thievery are tolerated and even cheered on, but what they feel for each other has to remain a secret.

Cole Flores and Ned O'Leary are characters with flaws, they do immoral things and they have their own sense of right and wrong.

From the first chapter, the book drew me in and transported me in a past where the world was simpler and more complicated at the same time. The train and the telegraph were the only means of communication between towns and horses were the way to travel from one place to the next. It took hours or even days for news to reach the next town over and moral people were few. Everyone lived by a different set of rules back then, rules so different from what we know today.

The book ends at a point where everything is up in the air, but that's to be expected as it's just the first part. If you've read that title for the second book you can guess a little how that part is going to go down. My guess is that it will be from Cole's POV, but who knows....

Either way, nothing can prepare you for the last chapters in this book. For me it was a constant state of holding my breath, murmuring "no way" and being wrong about thinking that things couldn't get any worse.

Don't worry though, this is still a romance, and the fact that it takes place in such a world makes it even more so. The things they confess to each other, even if they use the same words someone might use today, even if they leave some things unsaid, even if they insinuate some others, have more meaning because of the society they live in.

It's been more that a year since the last time I read a book that sucked me in so effectively and so completely. There are good books and then there are books that you can't even find the words to describe them. "The Man Who Loved Cole Flores" is one of those for me, I dived in and forgot about the here and now. It transported me in a world filled with dust and guns. In a world so simple that you could lose yourself in a walk or a swim without being interrupted by a ringing phone and so complicated that justice came in the form of more crimes....