Blogtour: The Queen of Emerald Falls by J.J. DiBenedetto 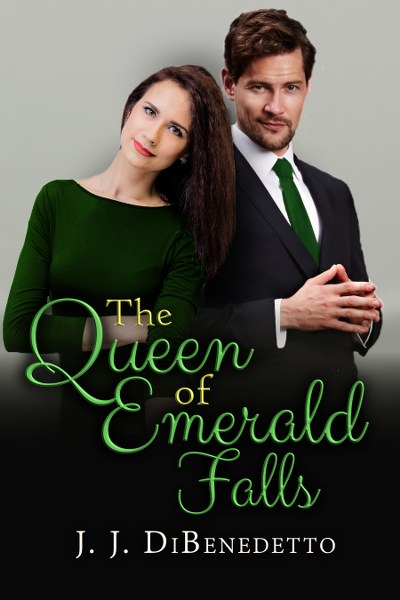 She's spontaneous, passionate and has a habit of mangling the English language.
He's calm and controlled and always has the perfect thing to say in every situation.
If their differing personalities were the only obstacle, they'd probably have smooth sailing. Unfortunately, things aren't that simple in the town of Emerald Falls, and life keeps throwing curveballs at Sheryl Jones and Dr. Jon Hardy.
If they're going to find true love, they'll have to deal with Sheryl's archenemy trying to destroy her business, and Jon's interfering brother showing up to try and ruin his life. And then there's the vindictive daughter of the richest man in town, not to mention a stolen vintage Rolls Royce.
Can this star-crossed couple fight their way past all the obstacles and make their way back to each other without losing their jobs, their sanity or going bankrupt in the meantime?

Romantic comedy fans will love this quirky mix of "How I Met Your Mother" and a daytime soap opera.
Add to Goodreads
Amazon * Apple * B&N * Kobo * Smashwords
Excerpt:

She might be gone, but she was still everywhere, in every room of the Chalet.  The place itself was a reminder of her; she’d been the one to recommend it to him when he’d grown tired of that wretched temporary apartment near the university.

The kitchen provided no relief from thoughts of her.  The marble island brought back memories of Sheryl’s disastrous attempt to make French toast.  A glance at the espresso machine called to mind the night she’d somehow caused it to spew hot coffee all over the floor.  He still didn’t know how she’d managed that; according to the manufacturer, it was physically impossible for the machine to do what she’d made it do.

She’d made over his living room against his will, defiled his kitchen, done unspeakable things to the finest espresso machine money could buy, driven him to distraction in more ways than he could count - and yet, if she were to come walking back through his front door, Jon knew he’d most likely forget all that and kiss her as though both their lives depended on it.

He could call her.  It would be the easiest thing in the world.  And didn’t he tell his patients that most of the obstacles they complained about were of their own making, that they had the power to overcome them, that - usually, anyway - all they really had to do was get out of their own way?

He did.  And it was absolutely true.  It was also - as so many of those patients remarked at the end of sessions - far easier to tell someone else to do, than to do it oneself.

J.J. (James) DiBenedetto was born in Yonkers, New York. He attended Case Western Reserve university, where as his classmates can attest, he was a complete nerd. Very little has changed since then.
He currently lives in Arlington, Virginia with his beautiful wife and their cat (who has thoroughly trained them both). When he's not writing, James works in the direct marketing field, enjoys the opera, photography and the New York Giants, among other interests.
J.J. is the author of the Dream Doctor Mysteries, the Jane Barnaby Adventures and several other works.
Website * Facebook * Twitter * Bookbub * Amazon * Goodreads

Follow the tour HERE for special content and a giveaway!
$15 Amazon giftcard,
Signed paperback + audiobook & usb with all of the author's books on it
-1 winner each!
a Rafflecopter giveaway
Promotional post. Materials provided by