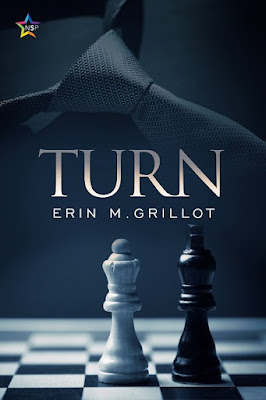 The responsibilities Nathan has taken on are sometimes daunting, even as he loves his job. Always ready to rise to the occasion, he is both respected and feared in the office and in the field. His rise to quiet power has shaped his very being, and he knows each and every move as he plots his days and watches over his agents. His life has shaped him into a loner, however, and that is never more noticeable than when Eli begins work in Department 5.

Eli is not the typical Department 5 recruit, and his cheerful and polite nature is both intriguing and off-putting to Nathan. But as Eli weakens and breaks through Nathan’s walls, they gradually embark on a path of discovery and a relationship that defies both of their assumptions. It is by times quirky and odd, sometimes a little rough around the edges, always a bit fragile. But secrecy, lies, plots, and executions are Nathan’s job, and life—and some habits are hard to break. Finally, the tension their work holds can no longer be contained or ignored, and it threatens to destroy either themselves or all that they’ve found together.

Turn is a story about power, tough choices, and strategic moves—of knowing when to sacrifice a piece in this ongoing game of chess, sticking by your actions, and knowing what the endgame is—no matter what the personal cost. Most importantly, it’s about life’s hardest lesson. Sometimes love isn’t all that you need, and the wants of our hearts aren’t always enough to overcome who we are and the realities of life.

Hi, my name is Erin! My debut novel, Turn, was out November 23rd from NineStar Press. One of the underlying themes of Turn is chess. I didn’t learn to play chess until college, but it stuck with me and I love the intelligence and strategic undercurrents of the game. I help run the chess club at my kids’ school (during non-pandemic times) and even have a chess tattoo. My Pinterest boards are littered with different quotes on chess and life and interesting chess tattoos and art.

Once I had the character of Nathan in my head, I just knew he had to play chess. The game has a reputation and that fit in with how I pictured Nathan—aloof, strategic, intelligent, ruthless. And from there, a lot of the underlying metaphor of the game came to wind itself into the novel. The idea of strategy, playing situations a certain way, sacrifices, the concept of the long though out plan—it all really became central to the plot. I loved tying not only the themes of the game, but also the game itself, into different parts of the story. Read below for a few different exclusive excerpts that show these scenes.

“Why chess?” I ask him on the second Friday, wondering how he’d picked up that I played.

A short laugh bursts from his lips, sounding deprecating, even to me. He waves his hand rapidly in apology and takes a quick breath before tilting his head at me.

“You do realize you’re the quintessential genius supervillain who plays chess by himself at night in his lair, right?” His face is carefully blank as he says it and makes his move, pawn to b3. I try not to think how spot-on he is.

“Plus, you asked about it in my interview. And it wasn’t just a question. Also, the elegant and obviously expensive board midgame at your place? A little telling.” His eyes remain on the board, lips quirked.

I don’t answer him; there isn’t anything to say that could refute his overly accurate observation. So, I fight back the only way I know how—knight to g6 to capture his pawn.

“When did you learn to play chess?” Eli asks one Friday, partway through our lunchtime game.

“Taught myself growing up,” I respond vaguely. There were books on it in the library where I used to hide for warmth in the winter and to avoid the street gangs in the summer, and they had a small set in the corner there. It fascinated me the first time I saw it, all finely sculpted pieces and disciplined order, lined up as if waiting just for me. My elementary-school-self had also fit snugly underneath the table that held it—the perfect place to hide away for hours with a book and a dream.

“I didn’t learn until high school. A friend of mind played, and he took it upon himself to teach me. He was aghast that I didn’t already know. I took to it easily. Rule memorization was right up my alley, and I was beating him before the year was out. Not sure I’ve really played since, but I’ve somehow never managed to forget the rules.” Eli says the whole thing with an odd, far-off look in his eyes and ends with a rueful laugh, shaking his head and peeking up at me from under his fringe.

“I was a natural at it.” The words slip out before I realize I’ve thought them. But Eli simply nods in response as if they make perfect sense; and perhaps they do.

“I get it, I do. You love what you do, and I love you. But it’s still hard sometimes, wondering. Why is it always you?” His voice cracks at the end.

“Because if it isn’t me, it would be somebody else. And how could I live knowing I passed this along to someone else—I placed that burden upon their shoulders?” My words are quiet and my eyes are closed as I lean my head against his, all of my weight resting against him, holding me up.

“Why does it have to be anyone?” The raw honesty in his voice exposes hurt beyond just our relationship. I pause, envisioning a world where my line of work wasn’t a necessity. “Who else is going to save them? To make the tough choice to take one person’s life but save another hundred?” I sigh. “You want to know why me? The truth?”

I sit up and turn to him, grasping his hands in my lap. “Because I play the game better than anyone else. You get it, I know you do even if you don’t want to. You protect the king because that is how the game is played. I may not play by all the rules, and my pieces may not always be fair, but you can damn well bet that my king is always safe.”

He’s quiet, hands still absentmindedly running against mine. Finally, he leans in and nudges my cheek with his nose before placing a soft kiss on my lips. He looks defiant and defeated all at once. “And what piece does that make me?”

“You haven’t figured it out?” I wrap my arms around him in a hug, fingers tracing the outline under his shirt. I’ve memorized its placement, stolen moments of staring and tracking.

“If you tell me I’m the queen, I’ll smack you,” he says, lightening the mood instantly. I laugh in spite of myself.

I take his hands in mine again, holding them close to my chest. “At work, the world is my king, and I keep it safe. But here—” I gesture with both our hands still between us. “—here, you’re not only the king, you’re the whole game.” 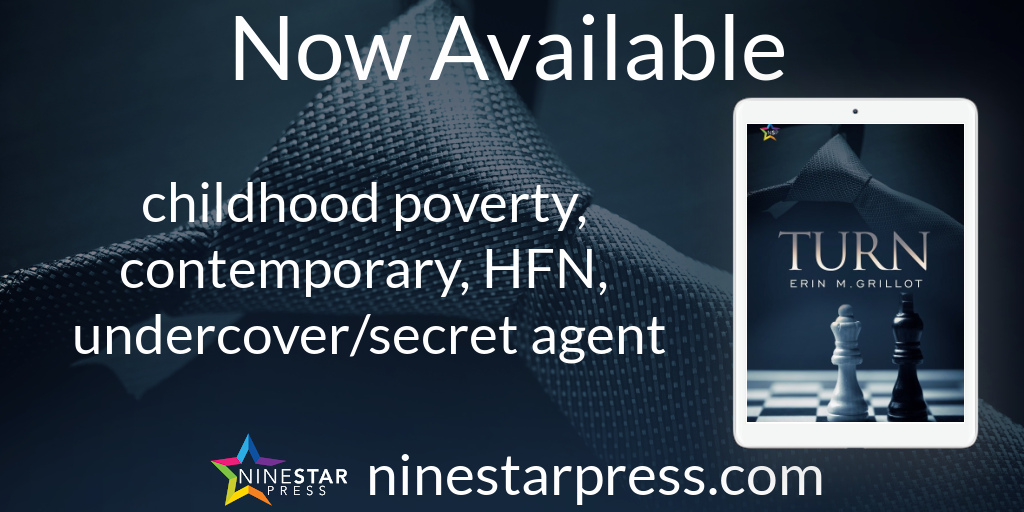 Erin is a native Midwesterner who has spent her life loving words in all their forms. Turn is her first novel. She lives in Iowa with her three children. An avid wine lover, introvert, coffee addict, and nerd; most of her free time is spent with her children, reading, or writing. Find Erin on Twitter.