Blogtour: How to Rope a Rich Cowboy by Anya Summers 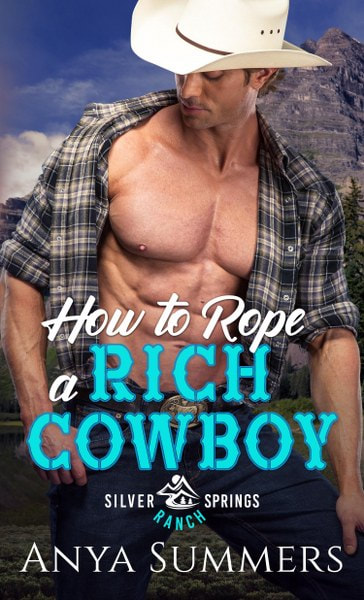 Colt Anderson is burned out. Every part of his daily life has become a tedious chore. He cannot remember the last time he took a day off or, better yet, felt a woman’s willing surrender. And it’s just his luck that on his first day off in ages, he runs into a sexy squatter on his property, never expecting that single interaction would alter the very fabric of his world.
Still, he cannot seem to stay away from the sultry scientist, Avery. Colt feels bad for her, worries that she is running from something, and decides to cover her stay at the ranch. After all, he owns the place and has plenty of cash. Although that tiny little detail is a secret he plans on keeping to himself. It is addictive having a woman look in his direction and not see dollar signs for a change.
Because when Avery casts those goddess eyes his way, he’s just a man, a man she craves and submits to body and soul, like he’s her man, and his longing for her has him tied up in knots. With trouble and danger drawn to her like magnets, Avery pulls out his protective, dominant nature. The woman needs a keeper, and he’s the perfect man for the job.
Now he has less than two weeks to convince her to stay, to make her fall for him before she discovers he’s rich. But will she hate him when she discovers his deception?

Tank snorted and tossed his head, breaking Colt out of his somber reverie.

“What’s up, boy? Smell something?” That’s when he noticed that the daylight had darkened considerably.

The wind that had been a gentle, humid, summer breeze now whipped tumultuously through the trees. He glanced up and his stomach dropped. Shit.

Dark clouds advanced on a warpath across the sky. Bright flashes of lightning arced across the heavens. And a deep rumble of thunder crashed, increasing in sound and tenor as the storm barreled into the area.

A midafternoon squall was common at this time of year. They could also be deadly this high up. There was a cabin nearby, one of the higher elevation getaways that Colt knew was vacant at the present time. Without a second to lose, he veered Tank off the path, and plodded toward the back-country road. He prayed that they would make it before the storm unleashed its fury in earnest.

Tank sensed his urgency with the approaching tempest, and increased his pace.

Luckily, the cabins all had a small barn with two stalls inside that were attached on the side, for visitors who brought their own horses with them for the trails and didn’t want to pay to stable them at the main barn. He’d get Tank settled out of the elements and would then chill out in the cabin while the storm raged. He might be spending a night up here after all. It could be exactly what he needed. He had a satellite phone in his bag in case of emergencies. The cabins were stocked with wood for the fireplace. And while all he had was a sandwich and water, he’d make do with what he had. At least the house keys in his saddlebag also had master keys for the ranch. Directly inside each barn door was a small lockbox on the wall that held a key to the cabin. The lockboxes were all keyed the same for maintenance. Since so many of their cabins were quite a way from the main hub, it was easier when they were on calls to be able to head directly to the next cabin and not have to worry about whether they had a key to enter.

When they were about an eighth of a mile out from the cabin, the rain began to fall in thick, heavy sheets. Lightning flashed. Thunder boomed. Tank snorted, tossing his head at the bellowing roar as the storm arrived with vehemence. Colt raced Tank as fast as was safe. He wouldn’t risk hurting the stallion. Rain dripped off the rim of his ivory Stetson. Water coated his blue jeans and gray tee shirt, and slipped down his calves into his brown leather cowboy boots. At least they were one of his older, well-worn pairs he reserved for working the stables.

They crested a tiny ridge. The hickory cabin sat on an open half acre of land encircled by a grove of trees—a mixture of aspen, cottonwood, and spruce. Hail began to fall with the rain, pelting them. The trees receded and in the open terrain, Colt pressed his knees against Tank’s flanks to increase their speed. Tank needed no urging from him.

But as the cabin came into full view, Colt spied a battered, tan SUV parked in front of the wooden structure. And there was a sprite of a woman, long dark hair plastered to her body, carting what looked like telescopes inside the building.

What the hell? Who was she, and what was she doing here?

Born in St. Louis, Missouri, Anya grew up listening to Cardinals baseball and reading anything she could get her hands on. She remembers her mother saying if only she would read the right type of books instead binging her way through the romance aisles at the bookstore, she’d have been a doctor. While Anya never did get that doctorate, she graduated cum laude from the University of Missouri-St. Louis with an M.A. in History.
Anya is a bestselling and award-winning author published in multiple fiction genres. She also writes urban fantasy, paranormal romance, and contemporary romance under the name Maggie Mae Gallagher. A total geek at her core, when she is not writing, she adores attending the latest comic con or spending time with her family. She currently lives in the Midwest with her two furry felines.
Website * Facebook * Twitter * Instagram * Bookbub * Amazon * Goodreads * Newsletter