Audio Book Review: Hazard and Somerset: A Union of Swords: The Keeper of Bees by Gregory Ashe 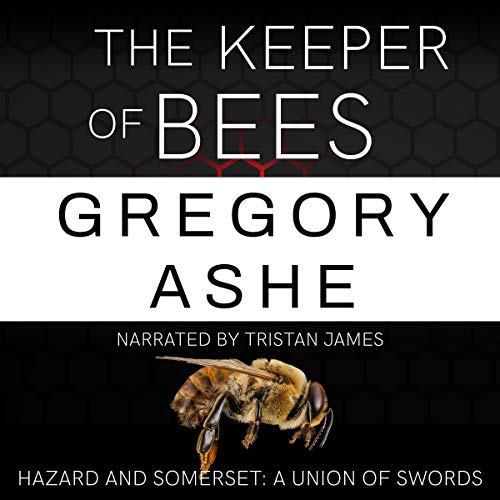 Emery Hazard has pretty much everything under control. He and his fiancé, John-Henry Somerset, are more in love than ever, despite the stress of wedding preparations hanging over them. His business as a private investigator is growing. He’s even enjoying time with his growing circle of friends. The only major problem on the horizon is whether or not he and Somers will be dancing at the wedding reception.

When Mitchell Martin shows up in his office, though, everything changes. The year before, Mitchell was abducted and tortured by a sadistic killer known only as the Keeper of Bees. Now Mitchell is convinced that the Keeper has come back, and he wants to hire Hazard to protect him.

While Hazard works to keep Mitchell safe, Somers must adjust to changes at work. A spate of new hires has disrupted the Wahredua Police Department, and Somers finds himself locked in a struggle to determine how the department will grow and evolve, with long-term consequences that will affect the town for years to come.

Then a woman is found murdered, and she has been staged and posed in a way that is eerily similar to the Keeper of Bees’former victims. As Hazard and Somers race to prevent more deaths, Hazard fears they are already too late; the Keeper of Bees has been ahead of them the whole time.

I think if I had to list 5 series that have kept me riveted from start to finish, that have taken me on the most amazing emotional roller coaster ride that this series would be at the top of that list.

I can honestly say there are more characters in this series that I have absolutely come to abhor than any other series that I remember reading, but it also goes without saying that the ones I loved I loved without reservation. Oh, I might have occasionally become frustrated with them but that's ok. I get frustrated with my son and anyone who knows me, knows that I loved him without reservation so it's all good. And without fail they've all come together to give me the most incredible stories.

Without reservation I have no love left for Dulac...none, zip, zero, zilch, nada...NONE! I think I actually like Somerset's father more than Dulac and I don't like him at all. The other person who made me crazy in this one was the new chief of police...the man's a pig...that's it as police go he's the example that explains why so many people fear/despise and hate the police.

Surprisingly one of the characters who shone brightly for me was the lawyer...Aniya Thompson. She was to say the least marvelous. I loved her.

Evie was a piece of child perfection. We got wonderful glimpses of her in all her adorable little girlness but she never stole the story...just added to it.

When it comes to the last book of a series 'The Keeper of Bees' was a piece of perfection. There was a lot going on in this one. Questions were answered but those answers weren't given without people having to fight for them (figuratively speaking and a little bit of the literal) Hazard and Somerset have found their way to each other and they're solid. They're also not afraid of letting the banter flow. These men are solid and they trust each other without hesitation.

As for who the Keeper of Bees was...well, I knew that as soon as Hazard told me because honest I gave up after the first 2 or 3 failed guesses. The mystery and suspense was rock solid on this and I was gripping the edge of my seat until the bitter ending...as for the ending...it was perfect. Not what I would have imagined for this two but perfect none the less.

The other piece of perfection that made this series just a jewel from start to finish was the narrator. I'm a longtime fan of Tristan James and to have the consistency of not just the same narrator but of one of my favorites was definitely a bit of audio book heaven.

I'm not sure what this author has in story for us but I have little doubt it'll be an adventure that leaves me breathless and anticipation what comes next every bit as much as this Hazard and Somerset have.

An audio book of "The Keeper of Bees" was graciously provided by the author in exchange for an honest review.