ARC Review: The Footman and I by Valerie Bowman 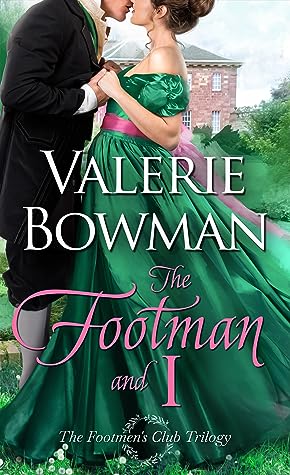 Every fortune-hunting female in London is after the newly titled Earl of Kendall, but he’s intent on finding a wife whose heart is true. So, while drunkenly jesting with his friends in a pub one night, he has an idea—what if the ladies of the ton didn’t know he was a wealthy earl? All he has to do is pose as a servant at his friend’s summer country house party and make sure the guest list is full of beautiful, eligible debutantes. What could possibly go wrong?

May the best footman win.

Miss Frances Wharton is far more interested in fighting for the rights of the poor than in marriage, but her mother insists she attend a summer house party—and find herself a husband. Frances would rather wed a goat than the pompous man her mother has in mind, so in order to dissuade the would-be suitor, she vows to behave like a shrew. The only person she can be herself with is the kind, handsome footman she runs into at every turn. Their connection is undeniable, and the divide between them is no match for the passion they feel. But what will happen when Frances learns that the footman she adores is actually the earl she despises? In a game where everything is false, can they convince each other that their love is true?

I really enjoy Valerie Bowman, and I liked The Footman and I, but the central plotline was so stressful and unbelievable for me that I rushed through it and didn't enjoy it as much as I was expecting.

You know when you are reading a story and you know there is deception afoot, and it's only a matter of time before the other shoe drops? I felt like I was waiting for the whole relationship to crash and burn for the entirety of the story. I mean, a relationship where one person is pretending to be someone completely different until almost the very end cannot end well.

I actually adored the characters at first, but then the male MC got a bit spineless and changeable for me, and the female MC seemed overly fixated on one law (the content of which was never fully explained). I know the conflict of the story is all based on that law, but I thought more details were warranted for me to understand it better.

I thought the chemistry was there and the pacing was right, but I struggled the most with how much the plotline centered around deception. It went on for far too long, IMO.

I will certainly go on and read more in this series because I was intrigued by the side characters, but I don't think The Footman and I was 100% my style read.