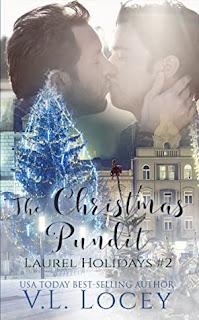 Will two complete opposites learn to cross party lines to benefit their beloved hometown and save Christmas?

As soon as Gideon Pierce returns to Cedarburg he picks up right where he left off back in elementary school—tormenting Evan at every turn. Only this time instead of shoving Evan down on the playground, Gideon is bedeviling him with snippy editorials in the local paper. Gideon is no longer the gangly, bucktoothed kid he used to be. When his gaze keeps touching on Gideon’s mouth and the appreciative fire in his brilliant holly green eyes, Evan is finding it harder and harder to keep his mind on witty replies to Gideon’s cutting viewpoints.

Evan Griffiths is the mayor of Cedarberg, Pennsylvania. The town he grew up in and Gideon Pierce is the the boy who made that growing up pure hell for him. But, Gideon left town years ago and hasn't looked back...or at least he hadn't until the day Evan looked out his office window and saw Gideon standing at the bus stop.
This is one of the most endearing holiday stories I've read in a very long time. Normally this is the point at which I'd be telling you how much I loved Evan...and I did love Evan, but for some reason it was Gideon who captured my heart from the minute he stepped off of the bus.
Evan's memories of the bullying that Gideon subjected him to has not faded over the year and neither has Gideon's memory of how truly horrible he was but the difference is Evan only thinks he knows what Gideon's motivations were...while Gideon knows the truth and he's determined to not only share that truth with Evan but, to make Evan see that he's a different man...one who truly regrets his behavior of the past.
I think many of us know what it's like to be bullied to one degree or another so we can definitely sympathize with Evan. That Evan always stood tall in the face of his tormentors and refused to let them win was more than admirable but it's also not to say that he didn't suffer the effects of being bullied, just that he was able to rise above them. Also to keep in mind that while Gideon was Evan's chief tormentor...he wasn't the only one.
I loved the interactions between Gideon and Evan. From their first conversation the sense of respect that Gideon seemed to have for Evan was present...subtle at times but always present. That these two men were on different sides of the isle when it came to political beliefs definitely added a challenge to the relationship along with the challenge that was Evan's mother. That she was not enchanted by Gideon is to say the least an understatement.
Gideon and Evan just seemed to fall into place for me. I honestly didn't even have to try to like either of them...I just did. Not to mention Evan's parents, Aubrey his PA and Mara his administrative assistant and the collection of small town characters who tend to make small town's both colorful and interesting.
While I could easily say this is my favorite book in the series...honestly, since it's only the second book what does that really say? Not much as far as I'm concerned but what I can also say without reservation is that this is one of my favorite holiday stories that I've read this year and I think that says more since I've also read more than two holiday stories this year.
The 'Christmas Pundit'...it's a second chance story with little to no angst and a lot of genuinely delightful moments.
*************************
An ARC of 'The Christmas Pundit' was graciously provided by the author in exchange for an honesty review.