ALL BUY LINKS
Cover Design: Meredith Russell
Length: 67,000 words approx.
The story of long nights in a wintry mountain hotel, a baking show with secrets, a snowman called Jeremy, and finding the greatest love of all.

After winning season four of ratings hit the World’s Best Baking Show, Brody Thomas had become a sought-after cake maker to the stars. Happily married, he dreamed of a bright future, but his perfect life imploded when he discovered that his husband had done nothing but lie to him. A year later, Brody is mid-divorce, and his life has been turned upside down, so being part of the WBBS charity event is excellent timing. He’s sure it will give him time away from home and space to get his head straight, only he never expected to meet the man of his dreams in a snowy Alberta.

Winning season one of WBBS gave Justin Mallory a chance to outrun the demons of a childhood lost in the foster system. He’s a social media influencer, with millions of followers, and works every hour to make money that equals security for the rest of his life. His marketing team signs him up for the WBBS Christmas charity show, but he’s convinced he’ll fall at the first hurdle. Only, after a few days in the competition, his worry isn’t that he’ll be the first to leave, it’s that he’ll lose his heart to a rival baker, Brody. 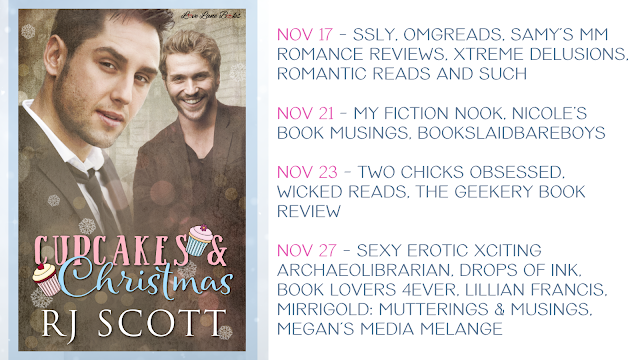 There are a number of things that can make a story or break it for me…of course there’s the plot, the location, the stories flow and the characters…are they likeable, do the play well off of each other and honestly the list goes on.

‘Cupcakes and Christmas’ worked all of these points really well. The plot was cute and festive and sweet and the location…holy crap!!! Ms Scott you nailed. Like you I’ve been to Banff, in the summertime but it’s still a hella’ beautiful place as is Lake Louise. While I didn’t have the chance to stay at the Fairmont hotel in Banff, I have been fortunate to stay in some of their other establishments and trust me people we are talking the lap of luxury and opulence. But I digress. The true subject here is the story that Ms Scott has created amongst one of Canada’s most beautiful and scenic tourist attractions.

Jeremy won season one of the Worlds Best Baking Show, Brody won season 4 neither man missed watching a episode of the others show and it wasn’t for the baking tips. Fate has brought them together in the WBBS’s Christmas charity show’.

I admit I’m abit of a fan when it comes to baking/cooking, home décor,  just about any of  those shows you can sit me down and plug me in…it’s probably why my television stays off most days unless I’m sick…seriously it’s an addiction. So this book was turning out to be right up my alley…a baking show, being filmed in Canada at a location I’m familiar with this was just feeling so cozy for me.

I loved how these two men had each other’s backs from the beginning. It was more of a friends thing than anything else, but Jeremy tried to bolster Brody’s sagging self-esteem and confidence…marring a major jerk will do that to a person. While Brody refused to let Jeremy lose faith in his baking skills.

We’re given not one but 3 ‘villains’ in this one each playing there own role in events and none of them connected to the others.

I found this to be a sweet, heartwarming story about the magic of love and Christmas…something we could all use a little of in challenging times. Definitely recommended for anyone looking to get into the holiday spirit.

An ARC of ‘Cupcakes and Christmas’ was graciously provided by the author in exchange for an honest review.

RJ Scott is a USA TODAY bestselling author of over 140 romance and suspense novels. From bodyguards to hockey stars, princes to millionaires, cowboys to military heroes to every-day heroes, she believes that love is love and every man deserves a happy ending.
Find RJ here: Amazon | BookBub | Facebook - Also, Never miss a release
Giveaway:
a Rafflecopter giveaway
Posted by Sandra at 12:00 PM