Release Blitz: Love in the Shadows by Maggie Doolan

Title: Love in the Shadows 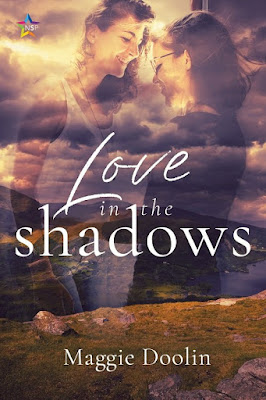 Meg Mitchell is about to enter her final year of secondary school in the small close-knit village of Curramore in rural Ireland. But even at eighteen, she has never had the joyful experience of first love with any of the boys she has met or gone out with.

However, that’s about to change with the arrival of dynamic young English teacher, Harriet Smith. Under the charismatic Harriet, Meg blossoms and discovers that she has a real talent for English. She also finds herself inexplicably drawn to Harriet.

Over time, Meg’s feelings deepen, but this is 1970s Ireland where homosexuality is still a crime, where sex of any description is never discussed, and where an all–powerful harsh and repressive Catholic Church holds sway over every aspect of family life.

In this climate, Meg will face many challenges, from her family, her community, and her own desires. She will have to choose a path forward despite difficulties that, at times, seem insurmountable.

Love in the Shadows
Maggie Doolin © 2020
All Rights Reserved

The August evening is gloriously mellow and warm with insects flitting among the bushes in the garden, and Sheridan’s Hill across the way is covered in a golden haze.

“This is the kind of day,” Meg mused, “that signals the end of the summer holidays. A day this perfect has to be an omen of some misfortune.”

“Wow, how philosophical,” Aisling said, rolling her eyes. She lay sprawled under the old horse chestnut, taking advantage of its dappled shade. “But I know what you mean. Think, this day next week—an end to freedom. Instead, we’ll have the jangling of bells, boring old classes, and teachers constantly talking about the Leaving. Blah, blah, blah.” She let out a long groan, the palm of her hand against her forehead.

Meg grimaced. “Yeah, and Boyce threatening us at least once in each class with being thrown into Ordinary level maths.”

They both fell silent, lost in their own worries. Meg, at eighteen, older than Aisling by a mere two months, frowned. At five foot four, she wished she would grow another few inches. She had brown hair with a natural wave, a narrow face that lit up with mischief, and mesmerising green eyes, or so she’d been told. She and Aisling had met on the first day of primary school, and they’d been friends ever since.

Standing at least five foot eight tall, Aisling had shoulder-length blonde hair and never found herself at a loss for a word. Her father had died when she was only a baby, and she’d grown up with her older brother and mother under a mile from where Meg lived with her parents and brother on the far side of the small village of Tullybawn. They were constantly in and out of each other’s houses, and both mothers joked they had each acquired a second daughter.

Aisling was outgoing and interested in doing while Meg, though popular and quick-witted, loved reading, and was, as her exasperated mother reminded her frequently, “A bit of a dreamer.”

“This year is going to be pretty grim, I fear.” Aisling frowned. “I’m terrified of biology, and I badly need that honour to get into nursing.”

“Yeah, I know how you feel,” Meg replied, blowing out through puffed cheeks as she shook her head. “I’m depending on the council grant for college, so I need four honours. Irish is grand, and I’m fine with geography and history, but English is a real challenge. I don’t understand what those poets are babbling on about. And as for Shakespeare, oh my God! At least Boyce can teach, but Clancy is a total disaster.”

They fell silent again. Meg glanced around the garden, her gaze caught by the swing hanging from the old beech. The wood faded now with age, and she visualised her father, sleeves rolled up and tongue slightly protruding, as he fixed the timber seat in place before climbing up the ladder to hang it from the tree. She and her brother, Luke, had danced around with excitement, driving her father mad with their impatience to try it out. She recalled the heady sensation of whizzing through the air. She had imagined taking off and soaring skywards like a bird. “Higher! Higher!” she’d shouted at her father as Luke pulled at his trouser leg, impatient for his turn. She loved their large garden with its trees, and the river at the bottom where her mother showed them how to catch minnows in jam jars, as excited as they were. Barefoot, they’d burrow one foot under the bank to flush out the tiny, darting fish. Her face softened, worries about the Leaving temporarily forgotten as she basked in the warm glow of the past.

A bike whizzing past the house and a hello thrown over the hedge recalled her to the present. She scrunched her face at Aisling, and they both giggled.

“C’mon,” Aisling cried, jumping up and striking a dramatic pose. “Things might be a whole lot worse. We might have lived during the time of arranged marriages, and at this moment, be contemplating your wedding to Mr Timmy Cronin, known to one and all, friend and foe alike, as Timmy Bucket Arse. Imagine, that would give you the unenviable title of Mrs Timmy Bucket Arse, honeymooning on a bicycle made for two…”

The last few words were sung theatrically before they both dissolved into fits of giggles again. For the moment, the Leaving Cert and honours and grants were swept from their minds. Time enough to worry about all that when they returned to school next week. 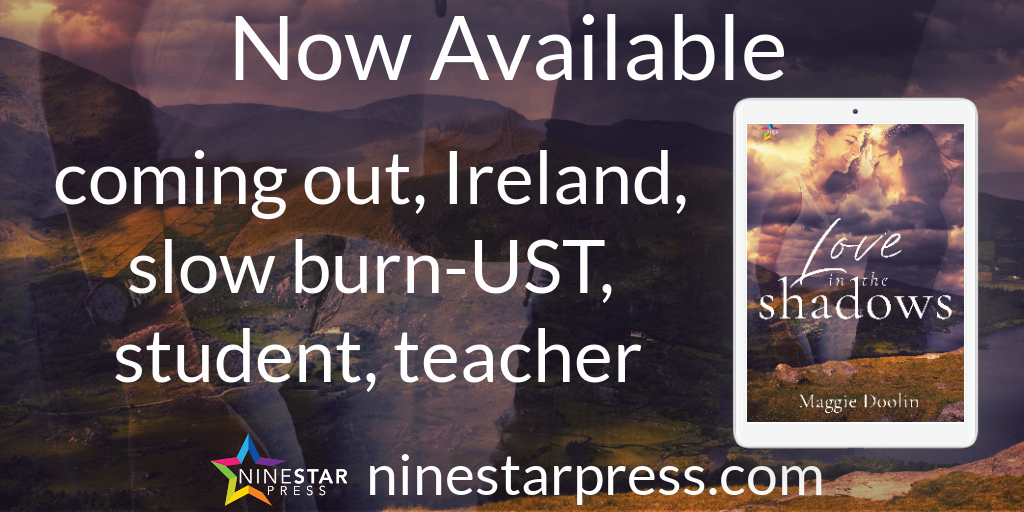 Maggie Doolin lives in County Cork, Ireland. She was born in the late 1950s into an Ireland that was dark, harsh and repressive. She has two adult children and works as a secondary teacher to keep her pet miniature Yorkie Terrier in the style to which she has become accustomed. Maggie is also a successful playwright and with a fellow playwright has a small theatre company that stages plays bi-annually. Love in the Shadows is her debut novel.

Please welcome Kate Bromley with  Talk Bookish To Me a Harlequin Beach Reads novel Kara Sullivan is definitely not avoiding her deadline. Af...