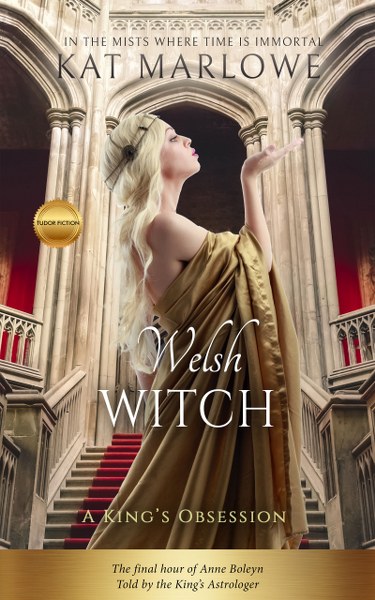 King Henry VIII's astrologer, a young Welsh witch finds the ultimate decision lies in her hands as one Queen falls and another rises as the history of England is forever changed.
A young Anne Boleyn captures the heart of the king. What begins as his distraction becomes his obsession and leads to her destruction. Court intrigue, revenge and all the secrets are revealed as one queen falls and another rises to take her place on destiny's stage.
Love, hate, loyalty and betrayal come together in a single dramatic moment...the execution of a queen.

Today is the third time the gentleman has been sent to me. Each time, the King has followed my instructions. Earlier in his life, I predicted that he would have daughters by his queens, Katherine and Anne. He said that I was the only astrologer he knew who truly has The Gift or The Power, as my mother called it. The King’s grandmother, Margaret Tudor, had been an associate of my grandmother. So it was with our ancestors, time immemorial. Their family had called upon mine whenever the need for a connection to the otherworldly was desired.

Lighting three candles to evoke the spirits, I say the words of magic taught to me by my mother.

Next, I move to place a basin of water in front of the only mirror I possess. The flicker from the candles reflects a golden aura throughout my small room. The rustle of my dress fabric against the wooden floor seems to give a rhythmic pattern as I move. The spiral dance of our ancestors begins, brought from the place in the mists from whence they came. The rhythm fills my mind as a pain shoots through my temple. The spirits are arriving. As the water flows from the ewer, the number 3 passes before my eyes. Water has always served as a divinatory method for my art. Three will be significant, of that I am certain. The sunlight filters in my room as the fragrance of the springtime lavender from the small herb garden outside the window fills the room. I walk to my collection of jars, take a pinch of the powdered herb, henbane, and add it to a cup of ale left from earlier in the day. Reaching into my cupboard, I remove three pieces of paper and my writing instruments. As I seat myself at the small wooden table, I hear a rooster crow three times. The trance begins.

A rapping on the door brings me to consciousness. As always, the papers before me have been filled with the numbers and lines, forming a chart. I have never truly understood The Gift, and am thankful to the Creator each time the visions are shared, using me as a conduit for The Power.

Kat Marlowe is free spirit and a lover of all things magic. She is a Scorpio, Leo moon with Aquarius rising and is mesmerized by the mystery of Anne Boleyn and Tudor England. She lives with her partner in a small cottage in the woods where she dreams and conjures things, and she currently has no social media. Although her future work remains a secret, her life is an open book.
Look for more from Kat very soon.